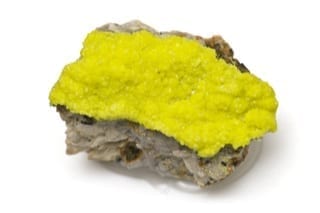 U3O8 spot prices hovered around $20 in Q3, but market watchers believe a rise is inevitable. Here’s an overview of the period, plus a look at what’s next.

U3O8 spot prices remained stable at around $20 per pound in Q3. Prices were at $20.35 as of July 3, and rose slightly to $20.50 on August 21 before falling to $20.25 on October 2.
Meanwhile, long-term U3O8 prices fell a dollar in September, and were sitting at $31 as of October 1.
According to the latest Monthly Monitor report from Sightline U3O8, the spot market currently accounts for over 22 percent of all uranium purchases, which is an all-time high. Countries with a keen interested in nuclear power, such as China, India, Saudi Arabia and the United Arab Emirates, are using the situation to stock up on uranium before prices inevitably rise.


Give me my free report!
Many market watchers believe that a price rise will come as major uranium companies negotiate long-term supply contracts. As Sightline U3O8 explains, “older, more profitable contracts” have allowed producers like Cameco (TSX:CCO,NYSE:CCJ) to sell uranium at prices much higher than the average 2016 spot price, but as they come up for renewal prices will be lifted from “currently unsustainable levels.”
Read on to learn more about what happened to uranium in the third quarter of the year and what may be coming as 2017 draws to a close.

Speaking to the Investing News Network over the phone, Mike Alkin of the Stock Catalyst Report said that despite low uranium prices there is “a primary mine shortfall.”
“There’s 180 million pounds of demand and 160 million pounds of primary mine supply, so the difference is being made up from the Japanese reactors still offline,” he explained. “The underfeeding is occurring at the enrichment facilities and the US Department of Energy. What they’re selling into the market.”
According to Alkin, U3O8 prices will need to reach $55 or $60 before additional development will happen.
He noted that one interesting recent supply-side development is that Kazatomprom has established a trading house in Zug, Switzerland. Kazatomprom is Kazakhstan’s national uranium firm.
Riaz Rizvi, chief commercial officer at Kazatomprom, said in September that the physical presence of the trading house in Switzerland allows the company to be “very responsive to customers within very short time frames” dictated by supply-and-demand situations.
Alkin the company can now “buy uranium from themselves essentially, rather than sell it into the market. Should they so choose, they can pool their inventory and sell it when they want and to whom they want. That could bring a little bit of support to the market — at least that’s my view.” He added that Kazatomprom has filed to go public next year, and “they’re going to do the best that they can to get their revenues and cash flows up” before that happens.
He also pointed out that when the last uranium bull market started in 2004 to 2005, there were 23 reactors under construction and 30 to 40 million pounds of new production coming online. In the current market there are 60 nuclear reactors under construction and “literally no new production coming online.”

There are currently 447 reactors in operation worldwide and an additional 160 planned, according to September data from the World Nuclear Association. All of these reactors require their initial load of uranium 30 months before operation.
Notably, on October 3, just after Q3 drew to a close, Japan’s Nuclear Regulation Authority gave an initial safety approval to Tokyo Electric Power (Tepco) (TSE:9501). It will allow the company to restart two of the reactors at its Kashiwazaki-Kariwa nuclear plant. The unanimous decision from five commissioners marks the first safety approvals Tepco has been granted since the 2011 meltdown of three units at its Fukushima plant.
That said, it’s worth noting that the governor of Niigata prefecture, where the plant is located, has said he will not discuss a restart until the prefecture completes a review of the Fukushima disaster. The review is not expected to be completed before 2020.
As a final note, Alkin said that the Trump administration is “very pro-nuclear power friendly,” which is a “sea change from what you saw over the past eight years under the Obama administration.” In late September, US Energy Secretary Rick Perry asked the Federal Energy Regulatory Commission to consider issuing new rules to ensure that nuclear and coal-fired plants are compensated, “not only for the electricity they provide but for the reliability they add to the grid.”
Don’t forget to follow us @INN_Resource for real-time news updates!
Securities Disclosure: I, Melissa Shaw, hold no direct investment interest in any company mentioned in this article.

This article is updated quarterly. Please scroll to the top for the most recent information.

Uranium Price Update: Q2 2017 in Review
By Melissa Shaw, July 12, 2017
As of July 3, the U3O8 spot price was at $20.35 per pound, up from $19.85 on June 20 and $19.25 on June 14. Despite that modest uptick, analysts believe the price won’t improve much more until 2018.
While additional reactors continue to be built in countries like China and India, the effects of the 2011 Fukushima disaster are still being felt. Utilities companies have not yet secured new supply contracts for uranium, and threats to supply — like Kazakhstan’s decision to cut output this year — have been unable to boost the U3O8 spot price for long.
As Numis Securities analyst Justin Chan recently explained, “[u]ltimately the uranium market remains in a situation where long term demand exceeds long term supply but the current situation is that there’s more short term supply than demand.” Read on to learn more about what happened to the uranium market in Q2, and what could the future could bring.

Government regulations were a major issue for many uranium firms in Q2. Perhaps most notably, Western Australia’s ban on uranium mining came into force in late June. One bright spot is that the four uranium projects that have already gained approval in the state will be allowed to proceed. They are Cameco’s (TSX:CCO,NYSE:CCJ) Kintyre and Yeelirrie projects, Vimy Resources’ (ASX:VMY) Mulga Rock project and Toro Energy’s (ASX:TOE) Wiluna project.
Paladin Energy (TSX:PDN,ASX:PDN), which has been struggling for months, has undeveloped uranium properties in Western Australia and Queensland that will be impacted by the ban. The Western Australia-based company also has properties in Canada, Malawi and Namibia.
The low U3O8 spot price also caused problems for uranium companies. State-owned Russian nuclear firm Rosatom announced earlier in July that it has applied to suspend development at its Mkuju River project in Tanzania due to the depressed price. The project is managed by Rosatom-owned Uranium One through its subsidiary Mantra Tanzania.
Tanzania’s new mining laws, which impose stricter regulations on foreign mining firms, also factored into Rosatom’s decision to press pause on Mkuju River. Among other things, the new legislation allows the country’s government to gain a 16-percent interest in mining projects with the right to increase it to 50 percent. The changes also brought an increase in uranium export royalties from 5 percent to 6 percent.
On the smaller end of the scale, exploration company Pele Mountain Resources (TSXV:GEM) decided sell its uranium and rare earths project in Ontario during Q2. On June 1, Pele said that “due to continuing weak uranium and rare earth prices, Eco Ridge remains uneconomic and offers limited short or mid-term benefit to shareholders.” Pele said it sold Eco Ridge to an unnamed purchaser for $380,000 and is now focused on lithium.
The uranium picture is brighter elsewhere in Canada. Denison Mines (TSX:DML,NYSEMKT:DNN) recently announced that the Canadian Nuclear Safety Commission has renewed its 10-year uranium mine operating license for the McClean Lake uranium deposits and mill. The mill is currently processing ore from the Cameco-operated Cigar Lake mine under a toll milling agreement.

Speaking to the Investing News Network via email, Michael Alkin, founder and CEO of The Stock Catalyst Report, said that a key uranium market player to watch moving forward will be Kazatomprom. The Kazakhstan-based company chose an investment banker in Q2 in preparation of floating up to 25 percent of its shares to the public in 2018.
“This seems to have flown under the radar of many uranium investors and it is a huge development regarding the potential for a short-term uranium price recovery,” said Alkin. He also mentioned that Kazatomprom plans to launch a sales and trading arm in Switzerland in Q3. According to Alkin, the move will allow the firm to pool inventory, “which they have not been able to do because under Kazakhstan transfer laws, they must sell mined uranium into the spot market.”
“Now, with their Swiss subsidiary, they can stockpile uranium and sell it into the market when they want. This can hold supply out of the market,” Alkin also said. He added, “when the largest producer, by a lot, Kazatomprom, can influence inventory into the market, it bodes very well for uranium prices.”
In its Q3 mining and metals outlook, RBC Capital Markets predicts that the U3O8 spot price will stay between $20 and $25 through 2018, after which time cost-curve economics will boost the price to between $30 and $40 from 2019 to 2021.
After 2021, the investment bank expects the market to move toward a deficit, bringing the U3O8 spot price to $50 in 2022, $60 from 2023 to 2025 and $70 from 2026 to 2028. RBC’s overall longer-term forecast for uranium is $65 based on marginal production costs.
Don’t forget to follow us @INN_Resource for real-time news updates!
Securities Disclosure: I, Melissa Shaw, hold no direct investment interest in any company mentioned in this article.