ALX Uranium Corp. is pleased to announce that it has acquired mineral claims prospective for copper-zinc-gold-silver mineralization.

ALX Uranium Corp. (TSXV:AL, FSE:6LLN, OTC:ALXEF) (“ALX” or the “Company”) is pleased to announce that it has acquired mineral claims prospective for copper-zinc-gold-silver mineralization at its 100%-owned Draco VMS Project (“Draco”, or the “Project”) located in the Grong Mining District of central Norway. The Company staked ten claims totaling approximately 5,959 hectares in May 2019 following its study of surface mineral showings integrated with historical airborne magnetic and electromagnetic survey data, which identified trends that could represent potential zones of volcanogenic massive sulfide (“VMS”) style mineralization. 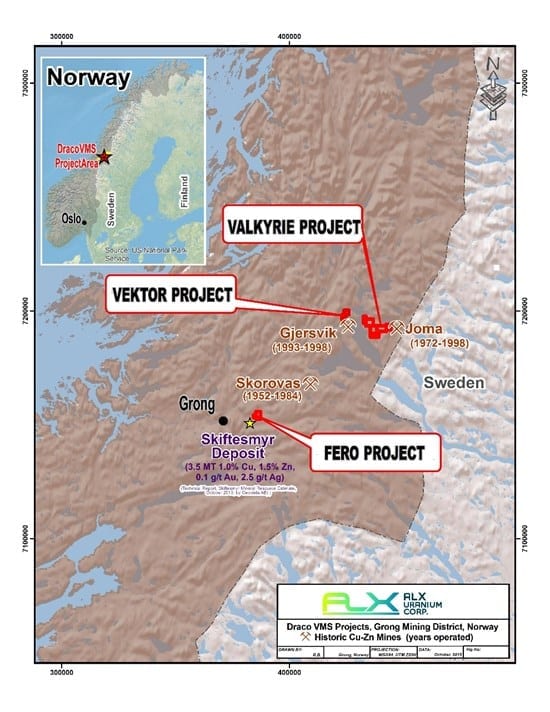 Map of the Draco claims

1, 2, 3. The historical mineral resource estimates listed above either use categories that are not compliant with National Instrument 43-101 (“NI 43-101”) and cannot be compared to NI 43-101 categories, or are not current estimates as prescribed by NI 43-101, and therefore should not be relied upon. A qualified person has not done sufficient work to classify the estimates as current resources and ALX is not treating the estimates as a current resource estimates. However, the estimates are relevant to guiding the Company’s exploration plans and provide geological information regarding the type of mineralization that could be present in the Draco project area. Mineralization hosted on adjacent properties is not necessarily indicative of mineralization that may be hosted on the Company’s Draco project.

To view maps of the Draco claims, geophysical trends identified by ALX, and known mineral deposits located near the Project, click here

About Norway and the Draco VMS Projects

Norway’s mineral endowment lies within the Fennoscandian Shield, which shares a similar geology and metallogeny with ancient shields in Canada, Australia, Brazil and South Africa. Mining from massive sulphide deposits in Norway dates back to the 17th century – examples include the giant, world-class Løkken deposit (Cyprus-type VMS, 24 million tonnes mined producing 552,000 tonnes of copper and 432,000 tonnes of zinc with up to 0.2 g/t gold and 16 g/t silver), and the Røros district (mining of twelve deposits produced 175,000 tonnes copper and 275,000 tonnes of zinc with significant silver from 6.5 million tonnes) and Folldal district (mining of four deposits produced 60,900 tonnes copper and 115,200 tonnes of zinc from 4.45 million tonnes) over more than 300 years (Geological Survey of Finland, Special Paper 53, 2012). The closure of the Joma Mine in 1998, located near ALX’s Valkyrie property, ended an era of more than 350 years of base metals mining in the Scandinavian Caledonides.

The Grong-Stekenjokk area of central Norway and west-central Sweden is one of the most important areas for copper-zinc VMS deposits in the Caledonides. Four mines have operated in the area (Stekebjokk, Skorovas, Joma and Gjersvik) with a total production of 24.5 million tonnes in the period 1952 to 1998. In the last four decades, there has been a decided lack of exploration for minerals in Norway, due to a greater focus on oil and gas exploration. ALX recognized this opportunity and applied its “first pass” geoscientific techniques to select prospective areas within underexplored open ground. The Company has engaged a geophysical consultant to perform detailed modeling on the electromagnetic trends within the three Draco sub-projects, and plans “ground truthing” of anomalies and follow-up ground geophysical surveys at the Project.

The technical information in this news release has been reviewed and approved by Tor Bruland, P.Geo., a consulting geologist to ALX, who is a Qualified Person in accordance with the Canadian regulatory requirements set out in NI 43-101. Readers are cautioned that the technical information described in this news release is historical in nature; however, the information is deemed credible and was produced by professional geologists in the years discussed.

ALX’s mandate is to provide shareholders with multiple opportunities for discovery by exploring a portfolio of prospective mineral properties in northern Saskatchewan, Canada, a superior mining jurisdiction. The Company executes well-designed exploration programs using the latest technologies and has interests in over 200,000 hectares in Saskatchewan, a Province which hosts the richest uranium deposits in the world, a producing gold mine, and demonstrates potential for economic base metals deposits. The Company also reviews exploration opportunities in other jurisdictions, and recently acquired base metals properties in Norway and a gold property in Ontario. ALX is based in Vancouver, BC, Canada and its common shares are listed on the TSX Venture Exchange under the symbol “AL”, on the Frankfurt Stock Exchange under the symbol “6LLN” and in the United States OTC market under the symbol “ALXEF”. Technical reports are available on SEDAR at www.sedar.com for several of the Company’s active properties.

Statements in this document which are not purely historical are forward-looking statements, including any statements regarding beliefs, plans, expectations or intentions regarding the future. Forward looking statements in this news release for example include and are not limited to the acquisition of the Draco VMS Project, and the anticipated benefits of future planned exploration programs. It is important to note that actual outcomes and the Company’s actual results could differ materially from those in such forward looking statements. Risks and uncertainties include economic, competitive, governmental, environmental and technological factors that may affect the Company’s operations, markets, products and prices. Factors that could cause actual results to differ materially may include misinterpretation of data; that we may not be able to get equipment or labour as we need it; that we may not be able to raise sufficient funds to complete our intended acquisitions, exploration or development; that our applications to drill may be denied; that weather, logistical problems or hazards may prevent us from exploration; that equipment may not work as well as expected; that accurate analysis of data collected may not be possible; that results which we or others have found in any particular location are not necessarily indicative of larger areas of our properties; that we may not complete environmental programs in a timely manner or at all; that market prices may not justify commercial production costs, and that despite encouraging data there may be no commercially exploitable mineralization on our properties. Additional risk factors are discussed in the Company’s Management Discussion and Analysis for the Six Months Ended June 30, 2019, which is available under Company’s SEDAR profile at www.sedar.com. Except as required by law, we will not update these forward looking statement risk factors.