OPEC’s deal to extend production cuts and US shale output could impact the oil and gas outlook next year. What are analysts’ predictions for 2018?

At the end of 2016, all eyes were on OPEC, which had signed a historic deal to curb oil production in an effort to rebalance the market.
The deal sent oil prices climbing in 2017, and they reached a two-year high in Q4. However, gains were limited due to an increase in US shale production.
Meanwhile, the natural gas market had a rocky start to the year, although prices seemed to be on the rebound in the second half of 2017. Market watchers are hopeful gains will continue, with residential demand strengthening as winter hits major markets.
As 2017 comes to a close, the Investing News Network is looking back at the main trends in the oil and gas space during the year, and at what the oil and gas outlook is for 2018. Read on to learn what analysts and market participants think is coming in the new year.

In 2017, oil prices performed with volatility, starting the year strong but falling by the end of the second quarter. Then, as demand remained strong and OPEC hinted at plans to extend its production cut deal, prices recovered. You can see oil’s price action in the chart below. 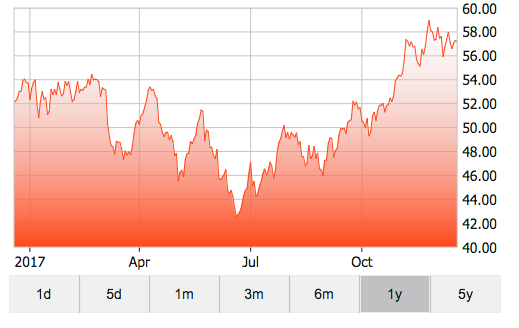 Oil prices from January 2017 to December 2017.
“Oil prices were broadly stable at the start of the year as markets adopted a wait-and-see approach to assess the impact the oil production cut deal between Russia and key OPEC players would have on prices,” said Ricard Torné, FocusEconomics‘ head of economic research.
“The markets had not factored in the true strength of the global economy enough, nor did they anticipate that Russia and the OPEC countries would comply with the production cut agreement reached in November 2016,” Torné added.
But investors became increasingly concerned in the second quarter of the year as they kept a close watch on the cartel’s production. While compliance with the cuts was strong, output from the US and Canada was on the rise during the period. Ultimately, however, prices began to rise.
“Various factors helped to turn the tide in Q3. The oil [production] cap agreement led by Russia and Saudi Arabia proved more successful than expected, with participating countries sticking to their quotas, thereby limiting global supply,” Torné explained.
Similarly, Capital Economics economist Thomas Pugh said compliance from members who signed the OPEC agreement has been much better than expected. That said, he noted that “the deal has been undermined by increases in output from Nigeria and Libya.”

Give me my free report!
In terms of demand, “concerns about rising protectionist policies started to fade, while growth in developed economies and China was surprisingly robust, boosting demand for oil,” said Torné.
Meanwhile, Pugh expected oil demand to be strong during 2017. He said that although “demand was disappointing in the first half of the year, [it] has surged in the second.”
When speaking about his price predictions this time last year, the analyst said he correctly estimated that prices would rise significantly in 2017. “We had a price of $60 per barrel for Brent crude for [the end of 2017] back in December. Although we did nudge this down recently to $57,” Pugh explained.
As 2017 closes, Pugh believes the two biggest news stories of the year were OPEC’s production cuts and the increase in US shale production. For his part, Torné said the biggest trends in the industry this year were “the effectiveness of the oil deal in reducing global supply, a reduction in political risks, particularly in Europe and the US, and resilient global growth.”
Looking over to natural gas, prices fell sharply at the start of the year on the back of a mild winter in the US and uncertainty over US energy and trade policy. 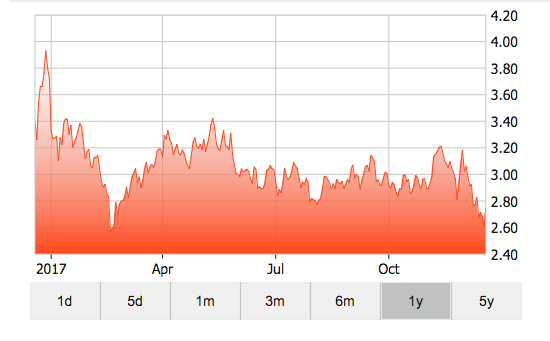 Natural gas prices from January 2017 to December 2017.
“Prices are quickly recovering some of the lost ground, but are are still lower than at the start of the year. That said, they have risen in recent weeks on higher residential demand,” FocusEconomics economist Oliver Reynolds explained.
In terms of news in the natural gas space, the continued march of the US shale gas industry was seen as a big trend. “With a slew of new projects currently in development, including substantial improvements to pipeline infrastructure, the country is fast becoming one of the industry’s major players,” Reynolds noted.

Analysts agree that a key oil market factor to watch in 2018 will be what happens with OPEC’s extension agreement and whether the cartel will comply with its production cut deal.
“US shale supply growth will also be a big deal. I’ll be watching what happens in Venezuela as well,” Pugh added. Meanwhile, Torné mentioned the global economic recovery and rising geopolitical tensions as factors to watch out for. He said that although the global economic outlook for 2018 appears to be healthy, there are some risks that could derail the ongoing positive trend.
“A tighter monetary policy in the US, the possibility of a sharp slowdown in China and many important elections around the world (including in Brazil, Italy and Mexico) all threaten to slow the global economic recovery and therefore impact demand for oil,” Torné said.
In terms of supply, geopolitical risks such as growing tensions between Iran and Saudi Arabia could lead to disruptions in output. “[But] along with the possibility of higher oil production by OPEC and Russia, Canada and the US will likely ramp up production next year, which will be more evident towards the end of the year,” Torné said.
For his part, Pugh expects the oil market to move back into oversupply “slightly due to strong growth in non-OPEC supply and slowing demand growth.”
He said next year oil prices should be at the same level as this year, and forecasts that Brent will reach $55 by end of 2018. “The big risk is the lack of upstream investment over the last few years causing a supply crunch out towards 2020, which could cause prices to surge.”
Firms polled by FocusEconomics estimate that the average WTI crude price for 2018 will be $54.70, while Brent crude is expected to reach $58.10. The most bullish forecast for the year comes from ABN Amro (AMS:ABN), which is calling for a price of $66 for WTI crude and $70 for Brent crude; meanwhile, Itau BBA is the most bearish with a forecast of $45.70 for WTI crude and $47.40 for Brent crude.

Give me my free report!
Looking over to natural gas, demand is set to rise due to low prices and its “better eco-friendly credentials” compared to other fossil fuels, Reynolds said.
“Developing economies — particularly China — will account for most of the increase. This should cause prices to tick back up slightly above US$3 per million British thermal units,” he added.
However, supply is also set to pick up, driven by greater US shale production and higher output from the Middle East and China. “This will likely keep a lid on any big price increase,” Reynolds said.
For his part, Pugh expects prices to rise “as demand for LNG exports and switching from coal to gas puts upward pressure on demand.”
Analysts polled by FocusEconomics expect the average natural gas price for 2018 to be $3.11. The most bullish forecast for the year comes from Credit Suisse, which is calling for a price of $3.50; meanwhile, Itau BBA is the most bearish with a forecast of $2.68.

Key factors to watch in the natural gas space will include supply security. “The threat of militant attacks in Nigeria’s Niger Delta region continue to linger, as will tensions in the Middle East — as evidenced by the ongoing diplomatic spat involving Qatar, one of the world’s key players,” Reynolds explained. Disputes between Russia and the EU over the conflict in Ukraine are also possible.
Lastly, Reynolds said investors should pay attention to developments in the US next year.
“A key question is the extent to which the US administration will deregulate the country’s energy sector, which could boost natural gas supply,” he said, adding that a potential unravelling of NAFTA could also hit US natural gas exports to Mexico, impacting prices.
Don’t forget to follow us @INN_Resource for real-time news updates!
Securities Disclosure: I, Priscila Barrera, hold no direct investment interest in any company mentioned in this article.
Editorial Disclosure: The Investing News Network does not guarantee the accuracy or thoroughness of the information reported in the interviews it conducts. The opinions expressed in these interviews do not reflect the opinions of the Investing News Network and do not constitute investment advice. All readers are encouraged to perform their own due diligence.