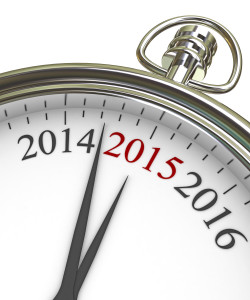 This past year has seen panic on the market and historic oil lows, both of which have hammered investor confidence in the commodity. Analysts are warning that 2015 could only provide slight relief in what has been a dramatic fall from grace.

West Texas Intermediate (WTI) started the year in the $99-per-barrel range and briefly saw gains in in the first six months of 2014, hitting over $105 per barrel in June. Since then it’s been nothing but bad news. Brent crude has mirrored its WTI sibling, falling steeply from $112 in June.

A key culprit was record shale oil production in the United States, which was initially seen as a good thing, with the US lessening its dependence on the Organization of the Petroleum Exporting Countries (OPEC). OPEC’s November decision not to cut oil production led to a further drop in prices and chaos within oil companies.

All in all oil prices have sunk roughly 30 percent this year — on Monday, the fuel hit a five-year low of $63 a barrel. 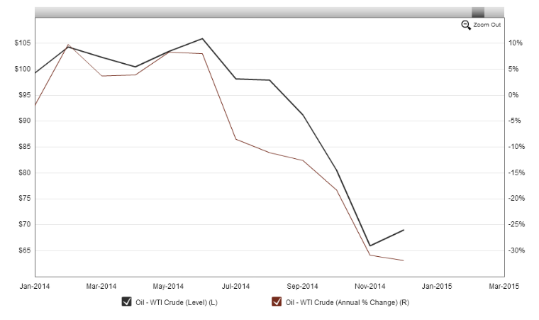 Commenting on US shale oil production, Patricia Mohr, Scotiabank’s vice president and commodity market specialist, said, “the development of those shales has been nothing short of extraordinary. I’ve been [Scotiabank’s] resource economist for a long time and never seen anything like it.” She added that work there has contributed to an increase of 1.15 million barrels of oil per day, largely through the utilization of horizontal drilling.

“It’s been a great thing for the US economy,” she said. “But recently it’s essentially destabilized the world oil market.”

Interestingly, despite the doom and gloom surrounding the recent oil markets, WTI will still average $93.82 a barrel this year, and Brent will average $99.54. Those numbers highlight the strength of oil at the beginning of the year.

Mohr estimates that WTI will average about $70 a barrel next year, and believes we have already borne witness to oil price bottom.

However the US Energy Information Administration (EIA) has cut its forecasted crude oil price to $62.75 a barrel. At the same time, the EIA expects drilling and production to rise to levels not seen in four decades. Bloomberg notes that US production will hit 9.32 million barrels of oil a day in 2015, which, while slightly down from previous projections, is still significantly higher than production seen this year.

In a previous interview with Oil Investing News, Chris Cox, an analyst with Raymond James, said a mid-$60 range for WTI wasn’t out of the question, but couldn’t to give an exact price.

TAG Oil (TSX:TAO) has already taken precautionary measures, announcing a share buyback because it “believes that its share price does not reflect the underlying value of the Company, and that purchasing shares for cancellation will be advantageous to the Company and its shareholders.”

Other companies — such as ConocoPhillips (NYSE:COP) — have announced that they will pull back on their drilling.

The bright side is that Bloomberg has reported that demand for oil appears to be somewhat rising — it is expected to be 92.32 million barrels a day next year, up from 91.44 million this year. Nevertheless, it will still compete with heavy production.