An overview of three technologies that have the potential to push the boundaries of offshore drilling in the near future. 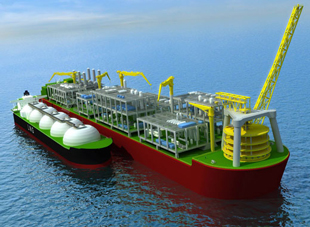 With much of the ‘easy’ oil and gas in the world found and recovered, energy firms increasingly have to push to extreme frontiers to make new discoveries. This often means moving further offshore, drilling in waters up to 3000 meters (10,000 feet) deep, which until recently had been beyond the capabilities of even the most accomplished exploration companies. Technological advances and an expanding pool of knowledge, however, have meant that previously inaccessible reserves can now be tapped, which is opening up a realm of new opportunities for those companies on the leading edge of innovation in the industry.

Below are three technologies that have the potential to push the boundaries of offshore drilling in the near future.

Floating liquefied natural gas (FLNG) facilities package all the components required to extract and process natural gas – drilling rig, treatment system, cooling plant for liquefaction, storage facilities – into a single floating vessel that can be towed out and left semi-permanently at an offshore deepwater gas field. The advantage of these titanic FLNG facilities is their ability to work geographically complex fields that that would otherwise be inaccessible by traditional floating or jack-up rigs.

Natural gas is often cooled to a liquid in order to facilitate its transportation, but this must be done at an onshore facility, which in turn requires a pipeline connection to the gas field. A permanent rig and pipeline system to the onshore facility is simply not feasible for some fields though, due to the distance from shore and ocean floor features such as trenches that can’t be crossed or that are too expensive to avoid. An FLNG facility skirts this pipeline problem by extracting and processing the gas onsite.

Shell (NYSE:RDS.A) is pioneering the development of FLNG facilities, working closely with Technip (EPA:TEC), a French company that specializes in gas technology, and Korean ship-builder Samsung Heavy Industries (SEO:010140). Shell’s first FLNG vessel is scheduled for completion in 2017, after which it will head to their Prelude gas field off the North West coast of Australia where it is expected to produce upwards of 3.6 million tonnes of LNG and per year.

For those oil and gas fields that can be connected by pipelines to onshore facilities, a particular challenge posed by deepwater operations is establishing a power system that can run the vast network of pipes, pumps, and compressors needed to get the oil and gas from the well to the processing plant. Onshore, such a system is fairly straight-forward to construct, but building a similar system underwater has always proven to be significantly more challenging.

German engineering conglomerate Siemens (ETR:SIE) has designed a power grid that will enable deepwater pipeline networks to operate properly, and which increase the effectiveness of processing components. The grid can power processing systems in water up to 3000 meters (10,000 feet) deep, and Siemens have already developed power grids for use in deepwater offshore fields by Petrobras at their Carapeba field in Brazil and Statoil at their Snorre project in Norway.

Though well containment systems prevent oil and gas from flowing, rather than facilitate it, they are, nonetheless, a key development for the offshore drilling industry. The Deepwater Horizon spill of 2010 in the Gulf of Mexico highlighted some of the risks involved in offshore drilling, and threatened the long-term future of the industry. Under pressure from regulators and shareholders, however, many large exploration companies have responded. The result is the development of containment systems that can be used to cap blown out wells in depths of up to 3000 meters (10,000 feet).

Trendsetter Engineering Inc. has designed a capping stack with a pressure capacity of 15,000 pounds per square inch as part of a containment system that is able to capture up to 100,000 barrels of oil or 200 million cubic feet of gas per day. These systems have so far been acquired by at least two groups, the Marine Well Containment Company, and the Helix Well Containment Group, whose members include most of the oil majors and large independents operating in the Gulf of Mexico. Members of these two groups have access to the containment systems should their own equipment fail.

Securing deepwater drilling permits in the Gulf of Mexico now requires access to a containment system, which not only satisfies regulators and shareholders, but could also provide some measure of financial security for companies in the event of a blowout.