Not all oil fields are accessible from dry land. When energy companies need to extract oil from underwater fields, they look to offshore drilling techniques. 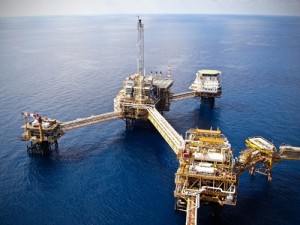 When it comes to drilling for oil, not all the resources are accessible from dry land. In order to extract oil from those hard-to-reach underwater oil fields, oil companies look to offshore drilling techniques to get the oil flowing.

Drilling operations vary depending on the type of platform and rig used to access oil offshore, the type of oil being recovered and the water depth. Energy companies are exploring for oil in oceans around the world, drilling in water depths from 300 feet to more than 10,000 feet.

Surface wells drilled offshore are similar to those drilled on land. For these wells, the platform acts as an artificial island, the casing is brought back up from the well and a land-style wellhead and production equipment is used. Subsea wells, however, can be found at the ocean floor and require more specific drilling and production equipment. Fixed rigs are built in place on the ocean floor and have a number of well heads.

Offshore oil drilling began in the Gulf of Mexico

While oil companies first began drilling wells in the ocean in the late 1800s, it wasn’t until March 1938 that the first freestanding structure was built in the ocean and the first well was drilled, according a report issued by the National Commission on the BP Deepwater Horizon Oil Spill and Offshore Drilling. This well was located in the Gulf of Mexico 1.5 miles off the coast of Louisiana in the Creole Field.

The first productive well drilled “out-of-sight-of-land” in 1947 by Kerr-McGee Oil Industries. It was located 10.5 miles off the Louisiana coast in the Ship Shoal area, according to the report.

Offshore operations continue to move further from the coast and in deeper waters as energy companies attempt to avoid operating in high geopolitical risk areas like the Middle East and Africa, the Christian Science Monitor recently reported. However, the farther these companies move offshore, and the deeper the water, the higher operating costs become. Drilling operations in water more than 7,000-feet deep can cost an average of $500,000 per day. Projects in shallower water cost $300,000 to $400,000 per day, according to the source.

Today, the three largest offshore oil fields are located off the coasts of Saudi Arabia and the United Arab Emirates, according to Forbes.

The world’s largest offshore oil field is located 165 miles north of Dharan, Saudi Arabia in the Persian Gulf. Of its 50 billion barrels of oil, 36 billion are believed to be recoverable, according to Forbes.

The field was discovered in 1951 and is owned and operated by state-owned Saudi Arabian Oil Co. The company is also the world’s biggest oil producer, with 260 billion barrels of oil reserves in 2012.

The Safaniya field’s production capacity can reach as high as 1.5 million barrels of heavy crude per day, OffshoreTechnology.com reported. It has reservoir ranges between 4,000 feet and 7,000 feet.

This offshore field is also located in the Persian Gulf and owne​d by Abu Dhabi National Oil Company, ExxonMobile (NYSE:EOM) and Japan Oil Development Company. The companies have a 60 percent, 28 percent and 12 percent stake, respectively, in the field.

The field is located 50 miles northwest of the UAE and was discovered in 1963. It was brought on stream five years later and is currently producing 500,000 barrels of crude per day.

Also located in the Persian Gulf, the field was discovered in 1957 and is located off the coast of Saudi Arabia. It has a daily capacity of 200,000 barrels of oil.

The Saudi Arabian Oil Co. began operating in the field in 2012. The company has 13 drilling platforms in the field and by 2014, when the field is expected to be fully operational, it will likely produce 900,000 barrels per day, according to the company.