The rare earths sector is changing quickly — click here to read our latest coverage of how the trade war between the US and China is impacting the space.

Of the 17 rare earth elements (REEs), some have proven rarer than others. Neodymium and praseodymium (NdPr), two metals instrumental to the rapidly expanding green energy and electric vehicle (EV) sectors, saw the greatest demand and price movement in 2018.

Demand for the metals, which are used to make high-strength magnets for wind turbines and EV engines, is expected to grow as more EVs are manufactured and as clean-energy strategies are adopted.

Increased demand has understandably raised interest in these metals, creating a number of significant developments in 2018. Those include a boost in production and exploration, output halts, REE recycling, potential tariffs and political tensions.

At the end of 2017, there was speculation that NdPr prices would spike due to their ever-growing list of applications. However, 2018 didn’t bring the price increase that was projected.

“But the prices for magnet materials in 2018 have been less bullish than the market expected, partly due to magnet producers extending the available stocks of neodymium where possible.”

2018 started steady for the sector. By March, Tesla’s (NASDAQ:TSLA) plan to switch to a magnetic motor that uses neodymium perked prices ahead of an expected incremental increase in demand.

“The price of neodymium oxide was expected to follow a steady uptick over 2018, which continued until the end of the first quarter, but the price has declined back to end-2017 levels, down 5 percent year-to-date to approximately US$45 per kilogram as of end-November 2018,” pointed out Backeberg.

By mid-year, concerns of supply disruptions began to materialize as China, the world’s largest producer of REEs, set up environmental protocols around the REE industry and crackdowns on illegal production.

“Chinese control of the rare earths industry remains strong, with around 80 percent of production originating from Chinese-based operations in 2018,” said Backeberg.

China wasn’t the only REE producer that had a bumpy year. Lynas (ASX:LYC), one of the largest rare earths companies outside of China, has encountered a variety of issues at its facilities in Malaysia.

Most recently, shares of Lynas fell by 33 percent when the Malaysian government imposed new environmental regulations on the company ahead of its license renewal next year.

“This has, however, not diversified the geography of the rare earths industry, as China has captured most of the downstream processing and magnet manufacturing capacity.”

That said, non-Asian REE companies are hoping that geopolitical uncertainty and the illegalities still evident in China will drive customers to their supply.

For Australia-based Northern Minerals, 2018 was an important year as Chinese disruptions gave way to opportunity.

“We expected that there would be continuing crackdowns in the illegal Chinese rare earth sector that would curtail production and result in strengthening in pricing due to lower production,” explained CEO George Bauk. “While there are reports of curtailed production, this has not translated into higher prices.”

Despite REE prices not gaining the anticipated traction, the company was still able to hit milestones.

As Bauk pointed out, “Northern Minerals spent 2018 focused on bringing its flagship Browns Range heavy rare earths project to market. We produced first rare earth carbonate in October and expect our first shipment to leave before the end of 2018.”

In addition to the Asian supply woes the REE market faced in 2018, the US also made news in the sector when the idea of adding rare earths to a list of heavily taxed and tariffed critical metals was floated.

The inclusion, which ultimately did not come to pass, would have forced the US to seek out REE suppliers other than China, despite the Asian nation being the largest producer of the in-demand metals.

Chinese control has created concern beyond the US administration, especially when late in the year the country announced it may reduce supply to meet only its own needs.

“In 2018 and for the future, the most challenging aspect of the rare earth market is the uncertainty caused by China’s control over the majority of mining, processing and downstream aspects of the rare earth supply chain,” said Donald Bubar, president and CEO of Avalon Advanced Materials (TSX:AVL).

Bubar, whose company has various projects, thought the REE story for 2018 would be more about applications and less about precarious supply.

“Towards the end of 2017 we expected the euphoria which had led to forecasted increases in demand for lithium, cobalt, graphite and other metals related to the growth of EVs to have the same impact on rare earths during 2018,” said Bubar.

The REE market will need to find innovative ways to build supply as more automotive makers switch from traditional gas-centric vehicles to EVs.

As Avalon’s Bubar said, the sector is facing three questions.

Similar to other metals used in batteries, REEs are seen as deserving of the spotlight due to their many current and potential applications.

“Getting investor attention to the requirement of magnet metals in EVs,” is one thing Medallion Resources (TSXV:MDL) CEO and Director Don Lay sees as being beneficial to the sector.

“If EVs are a generational investment opportunity, as many think, then NdPr (the magnet metals) have a big role to play,” he explained. “The business media picked up on this, but not the investment world.”

One development that will increase global supply is the REE recycling sector, which made strides in 2018.

Quebec’s GeoMegA Resources (TSXV:GMA) is one company that is committed to end-of-life magnet recycling. The Investing News Network caught up with CEO Kiril Mugerman earlier this year, and he explained the process involved in breaking down old magnets.

However, he remains optimistic that there is nowhere to go but up from here.

“We think REE prices have hit bottom, which makes end users very happy as they can expand applications and demand grows,” he noted.

Mugerman continued, “we expect growth in demand for magnets and rare earths in general. Will it translate into [a] price increase is still hard to say, but we think we are not far from seeing a tighter supply and demand situation, which will translate into a price increase for [neodymium, praseodymium, dysprosium and terbium].”

Rare earths outlook 2019: The year ahead

There is a lot of positive speculation that 2019 will be the year for REEs to shine.

“The demand outlook for rare earths is very positive, with the electrification of transport systems being a government-driven agenda globally, but this will take another year or two before it translates to a serious surge in demand,” said John Mair, managing director at Greenland Minerals (ASX:GGG).

“As a result, prices have not really moved much throughout 2018, but through 2019/2020 we should see prices strengthen as fundamental demand starts to surge. Supply remains tight globally, and bringing on new supply does not happen quickly.”

Mair expects 2019 to be a catalyst year for a rapidly evolving sector.

“I see 2019 being more positive for the resources sector as a whole, and the rare earth sector is one of the few areas that is really well positioned to surge positively owing to a strong demand outlook and constrained supply,” he said.

This perspective was reinforced by Commerce Resources (TSXV:CCE) CEO and Director Chris Grove.

“I expect that 2019 will be seen as the turnaround year where it will be finally clear to everyone that the demand for REEs is only going to increase, and this is against ever-tightening global supply,” said Grove. “This should be an exponentially better market for the projects that can be processed using standard processing techniques, such as our Ashram REE deposit.”

Advancement of the company’s Ashram project in Northern Quebec has been a win for the explorer.

“[T]he most important milestone for our company was the successful work done at the University of Laval producing a mixed REE oxide concentrate with an optimized flow sheet for our Ashram REE deposit, financed by a grant from the Quebec government. The share price was not affected significantly though,” added Grove.

For fellow Quebec-based REE developer GeoMegA, 2018 was also eventful. “First we produced magnet-quality 99.5-percent neodymium oxide, then we produced the same purity dysprosium oxide,” pointed out Mugerman. “Then we obtained validation from an end user that this material was good for making magnets, and finally we built our 20L unit which is a 10x increase from the previous scale.” 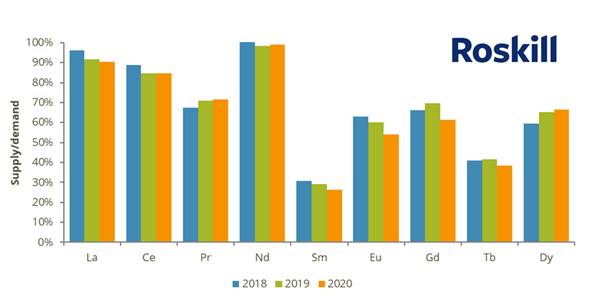 Roskill’s Backeberg also sees 2019 as an influential year for the sector, especially if EVs are able to grow the market significantly.

“The key growth area for the rare earths industry is the use of permanent magnets in the drivetrains of EVs,” said Backeberg.

“Motors using rare earth permanent magnets, predominantly NdFeB magnets, exhibit greater efficiencies and are less demanding on the batteries than competing technologies whilst providing the same performance. Each EV uses roughly 1 to 3 kilograms of RE permanent magnets, of which ~33 percent is contained rare earth oxides.”