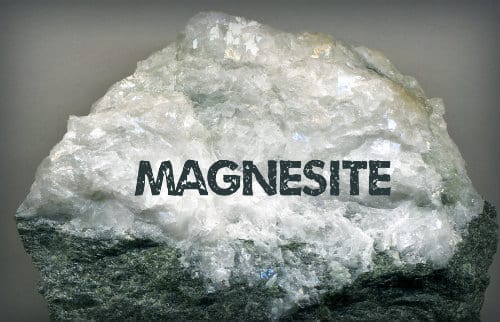 Here’s a look at the top countries for magnesite mining in 2017, as per the most recent data from the US Geological Survey.

Magnesium, a key industrial metal, can be recovered from a range of different host materials, with magnesite being just one key source of magnesium compounds.

Other sources of magnesium compounds include deposits of dolomite, forsterite and brucite, as well as magnesia-bearing brines and even seawater.

The US Geological Survey estimates that worldwide magnesite and brucite resources stand at 12 billion MT and several million MT, respectively, while resources for dolomite, forsterite and magnesite-bearing evaporite minerals together stand at similar levels.

In its latest report on magnesite compounds, the US Geological Survey looks specifically at magnesite production, noting that worldwide reserves currently sit at 7.8 billion MT. But what are the top countries for magnesite mining? Here’s a look at the nations that made the list in 2017.

Prices for magnesium increased marginally last year due to higher demand from the auto industry. In the years to come prices could also be favorably affected by a dip in supply from China. The Asian nation is imposing stricter laws in favor of reducing pollution; that said, more production at the Qinghai Salt Lake smelter plant could counterbalance any reductions.

Coming in at a distant second to China is Turkey, whose magnesite output came to 2.7 million MT in 2017; that’s the same amount it produced in 2016. According to Industrial Minerals, Turkey has a long history of magnesite mining, both for export and for use at domestic refractories.

Production from magnesite mining in Russia stayed flat in 2017 at 1.3 million MT. New capacity is expected to come online in the country in the future.

Russian Mining Chemical Company is a private producer that operates an open-pit in open-cast mine with proven reserves of over 8 million tons of brucite. The company claims that over 100,000 tons of brucite are produced each year.

Brazil’s magnesite production increased by 100,000 MT in 2017. The country’s Magnesita Refratarios (BVMF:MAGG3) says it holds one of the largest magnesite, dolomite and talcum reserves in the world.

Austria saw a slight increase in magnesite mining in 2017, putting out 730,000 MT compared to 710,000 MT in 2016. Austrian magnesite producer Styromag operates five mines in the country; it produces roughly 120,000 tons of material per year.

Slovakia produced 570,000 MT of magnesite in 2017, which is 10,000 MT more than it produced a year earlier. Slovakian producer SLOVMAG is majority owned by Russia’s Magnezit Group. It specializes in mining magnesite ore and producing refractory products from sintered magnesia.

Australia recorded a slight increase in magnesite-mining output in 2017 — its production rose to 450,000 MT from 425,000 MT the previous year. Queensland Magnesium, which is responsible for the bulk of Australia’s magnesite production, was acquired by global industrial minerals group Sibelco in April 2012.

Greece produced 400,000 MT of magnesite in 2017, the same as the year before. The country is home to one of the top magnesia producers in the world, Grecian Magnesite, which has facilities in Spain, Turkey and the Netherlands. Greece’s magnesite mines and production facilities are located in Chalkidiki in Northern Greece.

Spain’s magnesite output decreased in 2017, coming in at 310,000 MT compared with 300,000 MT in 2016. Spain’s Magnesitas Navarras is a leading European magnesia producer; currently the company holds the Antzeri and Sorianas magnesite-mining projects.

Rounding out the list, North Korea put out 300,000 MT of magnesite in 2017. Magnesite mining could continue to play a key role in North Korea’s economy. The country holds the second-largest reserves of magnesite in the world, and approximately US$6 trillion in total mineral resources.

However, with sanctions piling up and infrastructure run down, the country has yet to be able to capitalize on its natural wealth.