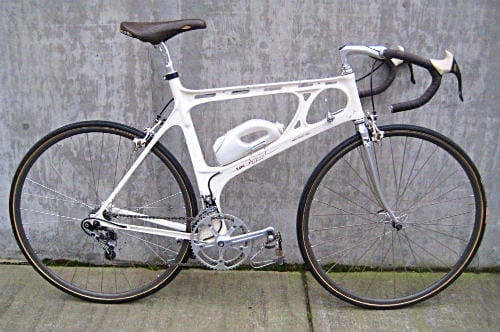 Manufacturing magnesium bike frames is tricky, but their extensive performance benefits make them well worth considering.

In cyclists’ quest for the strongest and lightest bike, titanium, carbon fiber and even scandium have all been touted as better frame materials than the more traditional steel and aluminum.

However, magnesium bike frames are also worth considering. Though magnesium has fallen in and out of favor over the years, bike makers like DT Swiss still seem to be betting on its success.

Magnesium bike frames: Made in the 80s

While they still have yet to take off, magnesium bikes have existed since the 1980s, when Frank Kirk first thought of making cast magnesium bike frames while working at Ford (NYSE:F) in Dagenham, England. These bikes eventually made an appearance in the Tour de France, but could not succeed commercially due to manufacturing and build quality issues.

Today manufacturers like DT Swiss, Paketa Cycles and others are addressing the challenges of magnesium bike frames through new technologies and the creation of new alloys. These developments are designed to yield better bikes that take advantage of the lightness, stiffness and high damping capacity of magnesium.

Magnesium can be used to engineer bike frames that are lighter than aluminum while maintaining high tensile strength and damping capabilities. All of that leads to a much smoother, more efficient ride. Magnesium also comes in at a lower price point than popular lightweight materials like carbon fiber.

But even with its performance and price benefits, magnesium is still not considered a standard for bike manufacturing. Why? Magnesium is softer and less stable than aluminum and the manufacturing process is still energy intensive. The metal is also prone to corrosion, making it very difficult to maintain. The combination of manufacturing obstacles and high-performance alternatives like carbon fiber have made magnesium a less popular option when it comes to manufacturing bikes.

Hope for magnesium’s future in manufacturing comes through the development of new alloys. These alloys can help reduce the negative impact of corrosion, improve stability and help magnesium become a more usable material. Finding great alloys can take years of research, and many companies seek to protect their formulas as trade secrets.

At least for now, magnesium looks unlikely to surpass the popularity of aluminum or carbon fiber. Still, the performance benefits of magnesium bike frames are worth considering, especially with advancements in technology that have improved upon welding challenges and corrosion. Frame producers like DT Swiss have also proved that magnesium bike components can be successfully manufactured to compete with some of the best aluminum parts on the market.

What do you think of magnesium bike frames — will they take off?

Securities Disclosure: I, Amanda Kay, hold no direct investment interest in any companies mentioned in this article.

One response to “Magnesium Bike Frames: A Challenge and Opportunity”