An annual survey shows that miners believe waiting periods for exploration permits are getting longer, dragging down Canada’s appeal as an attractive jurisdiction for investment.

The Fraser Institute has released a study concluding that Canadian jurisdictions are taking longer to issue relevant permits for mining exploration, weighing down the industry.

The study, titled Permit Times for Mining Exploration in 2017, says there is certainly room for many of Canada’s provinces and territories to improve the exploration permitting process, and the considerable mining potential of the Great White North is only some policy reform away.

“The permitting process for mining exploration is one area that is often overlooked in broader policy debates on mining,” states the study.

“Yet, uncompetitive policies in this area can increase the time, costs, and risks associated with exploration, potentially leading to reduced investment and decreasing the chances that a viable deposit will be found and eventually developed into a mine,” it continues.

The survey quizzed mining companies operating across 23 jurisdictions in five countries, and includes nine of Canada’s provinces and territories, comparing them to American and Australian states, as well as Finland and Sweden.

The Fraser Institute’s resident scholar and co-author of the study, Kenneth Green, says that “an increasingly opaque and confusing application process for companies to explore for mineral deposits deters investment and ultimately hinders Canada’s ability to realize its considerable resource potential.”

In damning numbers, 53 percent of respondents to the survey indicated that the amount of time for permit approvals to come through in Canada has increased over the last 10 years.

The survey, which asked five questions about the time it takes to receive permits, the transparency of the process and confidence in receiving approvals, shows Canadian operators gave their jurisdictions poor grades for timing.

Here, the Investing News Network takes a look at the numbers as reported by the Fraser Institute. Note that each company that took part was of course self assessing.

Three questions pertained to time, asking companies how long it took them to acquire the required permits, whether the amount of time had changed over the last 10 years, and finally whether or not the relevant jurisdictions met their own established timelines for permit approval decisions.

“In the Northwest Territories, 14 percent, and in Nunavut, none, of the respondents were able to acquire the necessary permits for exploration in two months or less,” says the study.

“The Yukon performs slightly better on this measure, as 29 percent of respondents indicated that they were able to acquire the necessary permits for exploration in two months or less. The pan-Canadian average for this measure is 39 percent,” it also states.

Extending the timeframe revealed most operators across Canada received permits in six months or less, bar Nunavut, where operators can expect to wait between seven and 14 months. 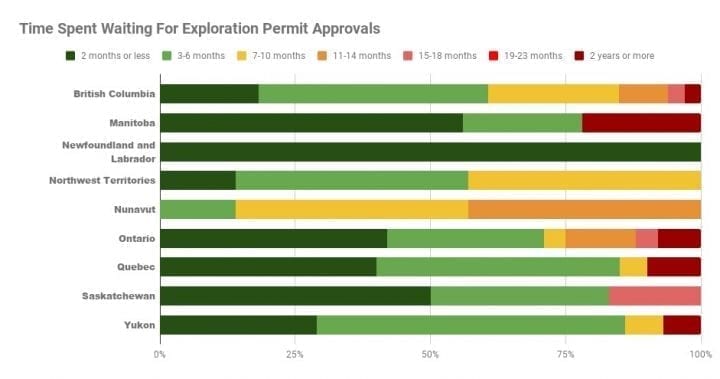 The study highlights BC, Ontario and Quebec for their performance, as they attract the most investment and projects, but notes that responses from companies there were mixed.

“In British Columbia, only 18 percent of respondents were able to acquire the necessary permits for exploration in two months or less … British Columbia also underperforms compared to its main competitors in Canada for longer periods of time, having the lowest percentage of respondents (61 percent) among the three provinces who indicated that they expected to spend six months or less acquiring the necessary permits,” says the study.

It also points out that the expectations of miners in the western province are dismal. “39 percent of respondents for British Columbia indicated that they expected to spend more than 6 months to get their exploration permits, compared to 29 percent in Ontario and only 15 percent in Quebec.”

The study claims that overall, Canada’s territories compare poorly in granting permits in a timely manner with provinces like Ontario and Quebec, which attract exploration investment for similar types of commodities. For example, 71 percent of respondents in Ontario, and 85 percent in Quebec, acquired the necessary permits for exploration in six months or less.

Compared to American and Australian states included in the survey, Canadian provinces don’t look too shabby. In America’s premier mining jurisdiction, Nevada, only 67 percent of operators received their exploration permits within six months or less, whereas the best-performing Australian state, Western Australia, saw 65 percent of operators receive their permits in the same timeframe.

When it comes to changes in time to approvals, Canadian miners are spending more time than ever waiting for the green light.

“In seven out of nine provinces and territories included, 50 percent of respondents or more said that the time to permit approval had lengthened over the last 10 years,” says the report. 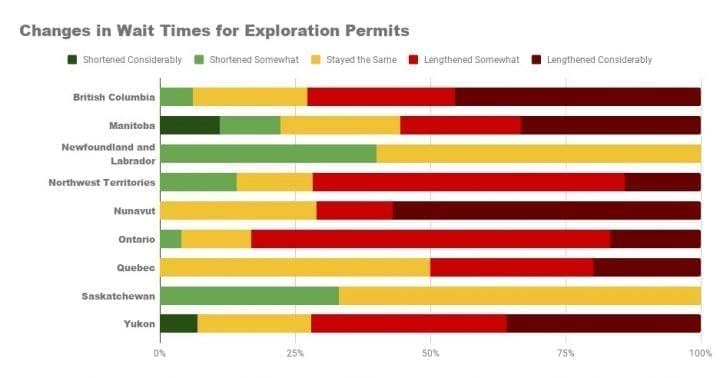 Overall miners are waiting longer everywhere by their self assessment.

Seventy-two percent of BC operators said the amount of time for exploration permits has lengthened — 45 percent said the time has “lengthened considerably,” while in the US, 54 percent of Nevada miners were spending more time waiting, and 27 percent of Western Australians shared the same experience.

The worst-performing Australian jurisdiction was the Northern Territory, where 67 percent of miners were waiting longer.

BC isn’t the worst Canadian jurisdiction for miners killing time though — a whopping 86 percent of Ontarian miners were waiting longer for their permits.

Looking at a jurisdiction’s own timelines, many Canadians are again being disappointed by the inner workings of bureaucracy and the promises they are made. 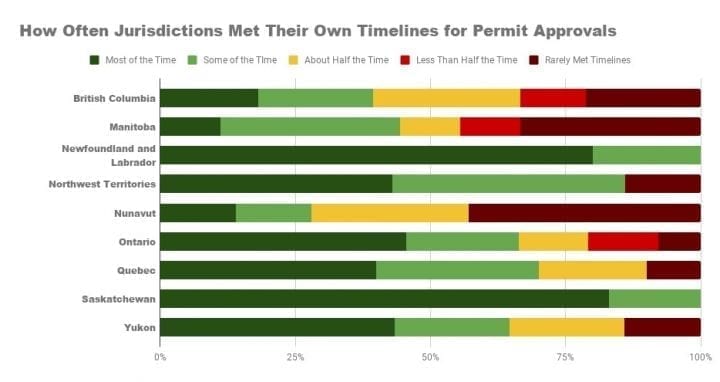 The study says that set timelines are important for miners as they are factored into costs, and blowouts in waiting times can lead to blowouts in costs.

BC and Manitoba performed poorly, with 18 percent and 11 percent of miners, respectively, getting their permits within the jurisdictions’ own set timelines “most of the time.”

In the middle of the pack were Ontario and Quebec, which sat at 46 percent and 40 percent, while Saskatchewan streaked ahead with 83 percent of miners giving their home jurisdiction good grades.

Compared to the competition, Canada’s about on par — 58 percent of miners in Alaska gave the government good marks, with the bureaucracy hitting its own milestones most of the time, while 29 percent of Nevada miners said the same.

In Western Australia, a healthy 61 percent of miners got their permits while none said the government rarely met its own timelines.

Moving away from the three questions on time, transparency was another topic queried, with miners asked how the level of transparency in the permitting process affects investment.

“When those prospecting for exploitable mineral deposits do not understand what the rules are or how they are applied, political interference and even corruption can enter the process, with the result that investment may be deterred,” explains the report.

Basically, this question asked miners whether or not they believe their home jurisdiction is showing them enough love and understanding.

At the head of the class for Canada is Saskatchewan again, with 67 percent of operators saying Regina “encourages investment,” and the remaining 33 percent saying transparency wasn’t a deterrent at all.

Newfoundland and Labrador was in the same league, with zero miners calling transparency an issue.

It’s a similar story for Ontario and Quebec, with 50 and 60 percent, respectively, saying it wasn’t an issue, and the remainder indicating displeasure with the permitting process.

The worst-performing Australian state was New South Wales, where 68 percent said transparency was a mild or strong deterrent. In all other Australian states, the majority said the government was friendly, or posed no issues.

The Americans were less impressive, but still good compared to most Canadian provinces. Only one state — Idaho — returned a majority of miners indicating transparency deterred investment at 57 percent, while 75 percent of both Alaskans and Utahns said the government was making the process clear.

Finally, operators were asked about their confidence in whether or not they would get the exploration permits they sought. The study explains that “if firms are not confident that they will be able to acquire the necessary permits to carry out exploration activities once they have met regulatory requirements, it is less likely that they will consider investing in the given jurisdiction.”

While Canada’s numbers for confidence look fine, compared to the competition they are well behind.

In Newfoundland and Labrador, 60 percent were very confident while the remainder were just confident.

Manitoba performed poorly, with 44 percent lacking confidence, while Saskatchewan was at the other end of the scale with 83 percent very confident.

Again, the numbers look fine, but when compared to the US and Australia, there’s work to be done. Ninety-two percent of Alaskans were sitting pretty and sure they’d get the permits they wanted, while 95 percent of Nevadans said the same.

In Australia, thumping majorities of miners across all jurisdictions said they were sure the permits they wanted would be granted, with 67 percent of Territorians saying they were very confident (although 33 percent said they had low confidence), and 100 percent of Western Australian miners sure their exploration aspirations could proceed.

Overall, the report concludes that “Canadian jurisdictions are lagging behind their international competitors for changes over time to permit approval, transparency, and confidence that permits will be granted,” noting that more could be done to encourage investment.