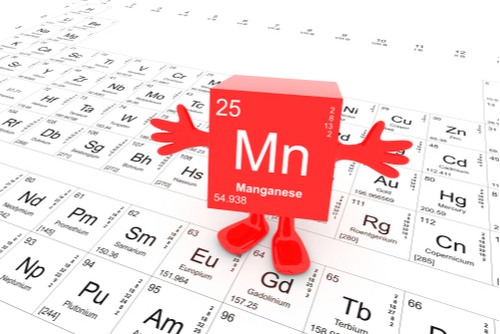 Which country was the largest producer of manganese in 2018? South Africa took the top spot, with other heavyweights following.

After two years of volatility, manganese performed with relative stability in 2018 as Chinese contracts had less of an impact on supply and demand dynamics than in previous years.

The verdict is still out on 2019, but the metal is strongly dependent on the Asian nation, which requires large amounts of electrolytic manganese to produce steel for construction. With a weaker Chinese economy expected, trouble might be in store for the metal — however, interest in battery applications for manganese could be a positive force moving forward.

As the manganese market continues to develop, it’s useful to know where the metal comes from. Interestingly, almost 78 percent of global manganese mineral resources are found in South Africa, though many other countries are significant manganese producers with sizeable reserves.

What is manganese used for?

While the steel industry is the primary user of manganese metal, consuming it as an alloy in steel production to enhance the strength and workability of the key construction material, manganese is also mixed with aluminum to manufacture tin cans.

Manganese dioxide and manganese oxide are often used as cathode materials in the production of zinc-carbon and alkaline batteries. Additionally, after crude oil is refined, manganese may be used as an additive to help coat and protect a car’s engine.

And, as mentioned, one of the most promising uses of manganese is in the lithium-ion battery sector. The silvery metal is used to make a lithium-nickel-manganese-cobalt oxide, which is known to improve energy loading and lifespan.

Batteries using this mineral composition are in high demand from the electric vehicle sector and are already in use throughout the space.

With that in mind, here’s a brief overview of the 10 largest producers of manganese in 2018. All stats are taken from the US Geological Survey’s most recent report on the metal.

South Africa is the world’s largest producer of manganese by a long shot, and in 2018 its output of the metal remained almost the same as the previous year at 5.5 million metric tons (MT). The country also holds the largest reserves of manganese, at 230 million MT.

South32 (ASX:S32,LSE:S32,OTC Pink:SHTLF) is a major presence in the South African manganese space. The diversified miner also produces bauxite, alumina and thermal and metallurgical coal, as well as other in-demand minerals. South Africa Manganese, one of the company’s four operations in South Africa, is made up of Metalloys and Hotazel Manganese Mines. Notably, the Hotazel mine is located in the manganese-rich Kalahari Basin, which holds 80 percent of the world’s known manganese ore resources.

Last year, Australia’s manganese production increased to 3.1 million MT from 2017’s 2.82 million MT. Though South32 is a key producer in the South African manganese space, it also has an Australian manganese operation.

As the largest producer of manganese ore, South32 controls a 60 percent stake in the Northern Territory manganese mine, which the company operates through its subsidiary Groote Eylandt Mining Company (GEMCO). The open-cut manganese mine is one of the world’s lowest-cost manganese ore producers. Anglo American (LSE:AAL) holds the other 40 percent interest in the project.

Located on the central western coast of the African continent, Gabon was the third largest producer of manganese in 2018. The coastal nation produced 2.3 million MT of manganese, a slight increase from the previous year’s 2.19 million MT.

The Moanda mine is a key manganese operation in the country. ERAMET (EPA:ERA,OTC Pink:ERMAY), the world’s second largest producer of high-grade manganese ore, operates the mine through its subsidiary COMILOG.

In its most recent financial report, the company notes that it is on track to reach its 2019 production record of 4.5 million tonnes of overall manganese production.

China was the fourth largest producer of manganese last year, recording output of 1.8 million MT; that’s a bit more than the 1.7 million MT it produced in 2017.

As mentioned, not only is the country a player in manganese ore production, but it is also a major consumer of manganese as it uses large amounts of the metal in steelmaking. A manganese reserve containing 708 million tonnes of manganese ore was discovered in the Guizhou province in 2017, the biggest deposit in Asia. With the addition of the massive discovery, China’s total national reserve levels are 54 million MT — the sixth largest global reserve.

Brazil produced 1.2 million MT of manganese in 2018, slightly more than it put out in 2017. Major miner Vale (NYSE:VALE) is the largest manganese miner in the country and accounts for a whopping 70 percent of its market. According to the company, 80 percent of its manganese comes from the Azul mine.

Like China, Brazil is a consumer of manganese in addition to being a top producer of the metal. An infographic from Visual Capitalist suggests that in the future, much of the manganese that Brazil uses could to go the agricultural sector. The country is a major supplier of agricultural products, but the land it uses to produce those products is low in manganese. As a result, the country’s demand for manganese is expected to grow in coming years as farmers look to improve crop health.

Ghana’s 2018 manganese output weighed in at 850,000 MT, nearly the same as it put out in 2017. Most manganese in the country is mined in the western region in an area around the city of Takoradi.

Consolidated Minerals, better known as Consmin, is one of the four largest producers of manganese in the world by volume and holds a 90 percent stake in Ghana Manganese Company, which runs the Nsuta mine. According to its website, Nsuta has total reserves of 45.01 million MT grading 28.16 percent manganese and total resources of 101.3 million MT grading 26.8 percent manganese. Consmin signed a 10 year supply deal with China’s Ningxia Tianyuan Manganese Industry in 2018.

As with China and Brazil, India is one of the leaders in manganese consumption as well as one of the top producers in the world. A vast majority of India’s manganese goes to the production of steel, for which manganese is a crucial alloy.

Unfortunately, that could pose problems for India in the years to come — according to the Indian Ministry of Mines, the country will face a shortage of manganese for steel production by 2020. The organization’s report, “Manganese Ore: Vision 2020 and Beyond,” outlines the need for increased exploration and production to support growing domestic manganese demand.

Ukraine takes the spot of eighth largest producer of manganese. The country outputted 740,000 MT of manganese in 2018, a small increase from 2017’s numbers of 735,000 MT. Like some of the other countries on the list, Ukraine is also a major importer of manganese products, specifically ore.

The country has the second largest reserves of manganese ore in the world, at 140 million MT or roughly 42.8 percent of global supply. The country’s Nikopol basin holds about a third of the explored reserves. Ukraine also has significant iron ore, coal and titanium deposits.

According to Metal Ukraine, in 2018 the nation imported 938,900 tonnes of manganese ore valued at US$182.7 million. This number was down 27.9 percent year-over-year. Of that, 57.5 percent came from Ghana, 18 percent came from neighboring Russia and South Africa exported 16.7 percent to the country.

Malaysia put out 510,000 MT of manganese in 2018, a small increase from the previous year. Roskill notes that, over the past decade, Malaysia has gone from producing almost no manganese to annual output of over 200,000 MT. Malaysia’s manganese is located in the states of Johor, Kelantan, Pahang and Terengganu.

A release from the International Manganese Institute states that manganese demand is expected to keep pace with steel manufacturing. Global steel production demand has grown by 9 percent in the last year and is anticipated to climb further.

Last but certainly not least is Mexico, the 10th largest producer of manganese. It put out 230,000 MT of manganese in 2018; that’s up slightly from 212,000 MT the year prior. The country has reserves of 5 million MT of manganese.

One of the country’s largest producers is Autlan (BMV:AUTLAN,OTC Pink:CMHFF), which produces a variety of manganese products, including manganese ferroalloy and manganese derivatives.

There are a number of mining companies interested in the developing manganese resources, and others working in exploration to target new deposits. Mining for manganese is one way to recover the metal, and scouring the seafloor is another way to source this valuable construction and battery metal.

According to the World Ocean Review, manganese nodules cover thousands of square kilometers on the ocean floor. The metal-bearing nodules are primarily composed of manganese; however, they also contain nickel, cobalt and copper, making them a potentially lucrative diversified mineral resource.

Now that you’ve read about the largest producers of manganese, what else would you like to know? Here are some related articles to peruse:

ESG Will Take Center Stage in Post-COVID-19 World
Best Copper Stocks of 2020 on the TSX
Potash Fertilizers: What’s the Difference Between SOP and MOP?
CPM Group: PGMs Will Stay Rangebound for Rest of Year