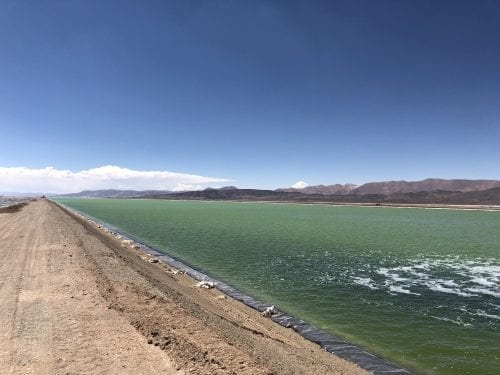 Project construction is expected to be finished by 2020, with first output estimated by early 2021 and full production by 2022.

Vancouver-based Lithium Americas (NYSE:LAC,TSX:LAC) has increased its expected production capacity at Caucharí-Olaroz to 40,000 tonnes per year of battery-quality lithium for 40 years.

Construction of the project, which is located in Jujuy, Argentina, is expected to be completed by 2020, with first output estimated by early 2021 and full production by 2022, according to an updated definitive feasibility study (DFS) released on Tuesday (October 1).

“With construction underway and funding in place, the results of the 40,000 tonnes per year DFS further supports Caucharí-Olaroz as a scalable, high-purity source of lithium carbonate for battery material customers,” said Jon Evans, president and CEO of Lithium Americas.

According to the DFS, capital costs for the lithium brine project have increased 33 percent, from US$425 million in a 2017 study to US$565 million, with output capacity jumping 60 percent from 25,000 to 40,000 tonnes of battery-quality lithium carbonate per year.

Operating costs now stand at US$3,576 per tonne of battery-quality lithium carbonate — up from the US$2,495 per tonne estimated in the 2017 DFS. The increase is a result of higher reagent costs, which reflect process changes designed to consistently achieve the more stringent low-impurity specifications of battery material customers.

Caucharí-Olaroz is being developed by Lithium Americas and Chinese top lithium producer Ganfeng Lithium (OTC Pink:GNENF,SZSE:002460), which in August closed a US$160 million investment in the project, forming a 50/50 joint venture with the Vancouver-based company. The joint venture owns Minera Exar, which oversees the project.

Lithium Americas expects its 50 percent share of Minera Exar to be fully funded to production, with US$221 million available under the company’s credit and loan facilities and net proceeds from the US$160 million investment by Ganfeng.

According to the most up to date mineral resource estimate, Caucharí-Olaroz’s measured and indicated resources stand at 19.85 million tonnes of lithium carbonate equivalent at a cutoff grade of 300 parts per million lithium.

Aside from Caucharí-Olaroz, Lithium Americas owns 100 percent of the Thacker Pass project in Nevada, the largest-known lithium deposit in the US.

Last week, the company said it is working on a DFS to be published in mid-2020, cutting its target production capacity from 30,000 tonnes of lithium carbonate per year to 20,000 tonnes annually.

On Tuesday, shares of Lithium Americas closed almost unchanged in New York at US$3.06.