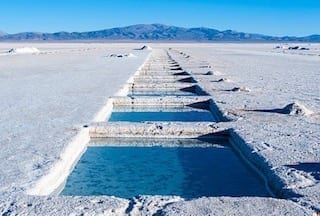 The German carmaker is reportedly close to signing a 10-year lithium supply deal. Lithium is a key component in electric vehicle batteries.

The deal comes at a time when automakers are looking to secure long-term supply of crucial battery metals to ensure mass production of electric vehicles (EVs) in the coming decades.

“The aim is to secure the supply all the way down to the level of the mine, for 10 years. The contracts are ready to be signed,” Markus Duesmann, procurement chief, told Germany’s Frankfurter Allgemeine Zeitung.

EVs are expected to account for 54 percent of new car sales by 2040, BNEF says. According to Benchmark Mineral Intelligence, in order to fulfill this increasing demand, supply of lithium will need to reach 550,000 tonnes by 2026, up from just 75,000 tonnes in 2016.

“For [BMW] it’s very important to make sure that our plans won’t suffer from a lack of supply,” BMW spokesman Michael Rebstock told the Financial Times.

He did not confirm the names of the suppliers or the total volumes involved, but said the amount will be “far below” the 100,000 tonnes of cobalt suggested by German media outlets.

Last September, BMW announced plans to mass produce electric cars by 2020 and to have 12 different models by 2025. But the company is not the only automaker in the race for a spot in the EV revolution.

Several carmakers have said they will electrify most of their models by the mid-2020s, including Volvo (STO:VOLV), GM (NYSE:GM), Mercedes, Dyson and Ford (NYSE:F).

In fact, BMW competitor Volkswagen (ETR:VOW) has been looking to secure supply of lithium and cobalt without progress since last year. The car giant said in November that it would spend $40 billion on electric cars, autonomous driving and new mobility services by the end of 2022.

Despite VW’s lack of success, many analysts believe contracts between carmakers and upstream companies will become more common in the near future.

“All auto makers are now fully aware of the need for secure, long term lithium supply but none have yet locked in long term contractual agreements,” Benchmark analysts said in their latest report, estimating that a number of lithium/auto deals will be struck in the next 24 months.

On Tuesday (February 13), shares of BMW closed down 0.83 percent, at 86.72 euros. The company’s share price has remained almost neutral year-to-date.