What happened to cobalt in Q1 2019? Our cobalt market update outlines key market developments and explores what could happen moving forward.

Last year, negative sentiment hit the cobalt market, and, despite bullish demand forecasts, prices started to decline sharply — a trend that has intensified during the first three months of 2019.

Demand for cobalt, a key metal in the lithium-ion batteries used to power electric vehicles (EVs), is expected to surge in the next few years. That’s why many analysts are optimistic about its fundamentals.

Read on to learn what happened in the cobalt market in Q1 2019, including the main supply and demand dynamics and what market participants are expecting for the rest of the year.

Aside from the uptick in prices seen in the first quarter of 2018, cobalt has been under pressure since last year due to increased supply from the Democratic Republic of Congo (DRC) and market volatility. 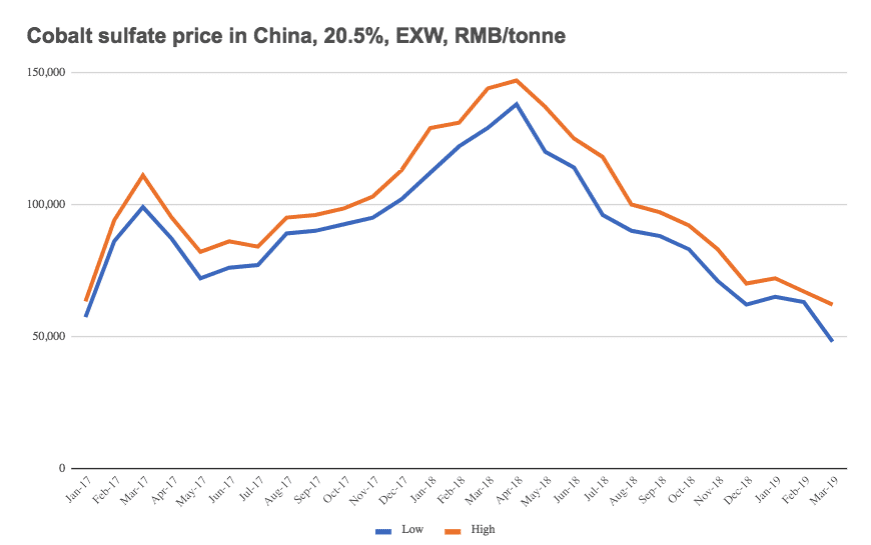 As a result of prices dropping from week to week, buyers have stayed on the sidelines, with the number and size of spot deals surging, Roskill Director Jack Bedder told the Investing News Network (INN).

He explained that significant amounts of cobalt were not committed to long-term contracts last year and many buyers, including those in China, are intending to purchase cobalt on a spot basis.

“While the outlook for demand, especially from the battery sector, remains very positive, sentiment remains depressed compared to one year ago,” he added.

Speaking about demand during Q1, CRU Group Senior Analyst George Heppel told INN that the main surprise in the first quarter was on the end-use side.

According to the expert, Europe is key for setting the cobalt price, and much of the demand in the region comes from chemical companies buying cobalt metal for processing into cobalt salts for chemical applications.

“What we’ve seen in the first quarter has been an increasing trend of these companies choosing to buy cheap cobalt salts from China as opposed to buying European metal, which has exacerbated the downward trend,” Heppel said.

Also impacting demand during the first three months of the year was the announcement of changes to China’s new energy vehicle subsidy policy, with incentives cut in average by 50 percent. The Asian country accounts for more than half of all electric car sales in the world.

“We may see a run on production by Chinese automakers until [the transition period ends] to achieve the higher [subsidy] rate, and then will follow the market closely to see the impact the lower subsidy rate has on Chinese EV demand,” Benchmark Mineral Intelligence Senior Analyst Caspar Rawles explained.

On the supply side, during the first three months of the year, the sector saw a lot of news about potential output disruptions.

In January, the DRC mines minister formally requested that top cobalt producer Glencore (LSE:GLEN,OTC Pink:GLCNF) suspend construction of the ion exchange plant at its Katanga mine.

The company was set to build the US$25 million ion exchange system to remove uranium found in its product, which exceeded the acceptable levels for export through the main African ports.

“The industry was expecting a wave of DRC cobalt hydroxide supply in 2019, which hasn’t materialized so far, with the two key projects in focus being Katanga and ERG’s RTR,” Rawles said. Cobalt hydroxide is the main raw material feed for the battery industry.

In February, ERG suspended production at its Boss mine in the DRC and at its Chambishi refinery in Zambia after the African country approved a new 5 percent duty on cobalt concentrates imported into the country this year.

“[These announcements] highlight how flexible supply can be dependent on prices and market conditions,” Rawles said.

In March, the DRC reported that it was banning cobalt concentrate exports — then overturned the ban a day later.

“Thankfully, cobalt concentrates only make up a tiny portion of DRC cobalt exports so this would not have a major impact on intermediate availability if permanent, but it is at the very least symptomatic of the high political and legislative risk associated with operating in the DRC,” Heppel said.

For now, the intermediates market is sufficiently well stocked and oversupplied, so these announcements have not had a major effect on prices.

“But should disruption continue to be the theme of cobalt mining in Africa, this could impact prices further down the line,” Heppel added.

Looking ahead, Roskill expects the market to roughly double in size over the next decade, reaching approximately 260,000 tonnes in 2028, which is going to require lots of new mine supply.

After the ramp up of the big projects in the DRC — Glencore’s Katanga, ERG’s RTR, Chemaf’s Mutoshi, as well as the various Chinese projects — there’s uncertainty as to where new supply will come from.

“We are tracking over 100 cobalt mine projects at the moment but outside Congo there are not many that are too big nor many at advanced stages … The cobalt market will be dominated by the DRC (mine) and China (refined) for the foreseeable,” Bedder added.

Bedder pointed out that this time last year, cobalt prices were above US$40 per pound. Since then, oversupply, especially of hydroxide, set against sluggish demand (and limited investor stockpiling), brought about a 12 month period of price decline.

“Prices stopped their declines recently and have tracked up a little. Destocking should push prices up a little further but how far is hard to say,” Bedder added.

Roskill expects cobalt prices to recover over the course of 2019, and to remain volatile over the coming years.

For CRU, prices performed worse than the firm originally expected in Q1, mainly as a result of very aggressive trader selloffs, which pushed the market price below a stable level.

“We largely anticipated a drop in the market in early 2019, as several key western metal producers were left with very high stocks towards the end of last year and were forced to slash offer prices in order to compete with cheaper Chinese material,” Heppel said.

“Further price gains are expected, although the days of average prices in the US$30s and US$40s are probably over for the time being ― barring any major unforeseen disruptions,” Heppel added.

For his part, Rawles said prices performed as expected in Q1 but dropped a little faster and rose a little sooner than estimated.

“Whilst we have seen a slight recovery in cobalt prices in the final week of Q1 and going into Q2, I don’t expect this rally to be long-lived,” he said.

“[That’s because, even though] the price increase will likely trigger some restocking by the downstream in the near term, there are overhanging stocks of raw material feed in Africa as well as some pent up supply from a number of projects [plus] excess capacity in the supply chain.”

According to the expert, the price increases seem to have been driven more by trading activity than any fundamental shift in demand. 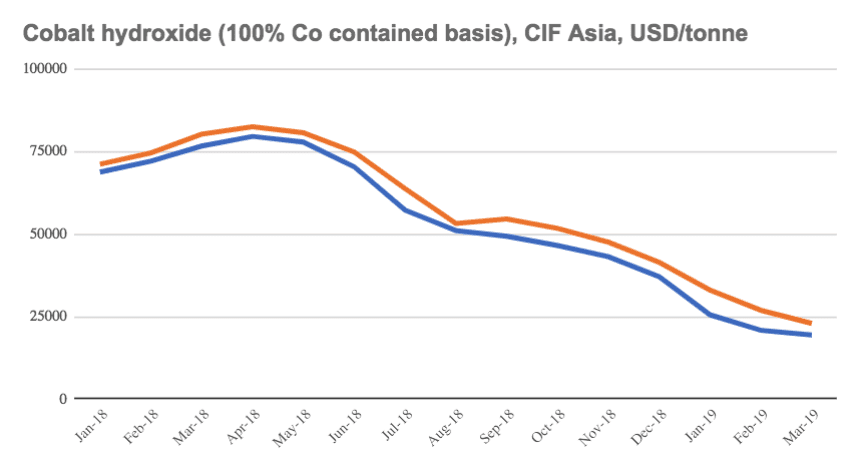 As the second quarter of the year begins, there are key factors and announcements that could impact the cobalt market.

Heppel said investors should keep an eye on mining announcements from the DRC, as the market relies on the timely startup of several key projects in the African country to remain balanced into the early 2020s.

“Any delays or disruption from such projects could cause lower availability of feedstocks,” he said.

The expert also said cobalt-focused market watchers should pay attention to the softening of the cobalt price combined with increased political and legislative risk in the DRC, as this could scare off investors in the long term and, in return, accelerate the next price cycle.

According to Rawles, another factor to keep in mind is the impact that the change in subsidy policy in China has on EV production and demand over the space of the second quarter, as this could play a significant role in cobalt demand.

Rawles also highlighted that, during Q1, the first major deal for raw material supply was signed by a western original equipment manufacturer (OEM) other than Tesla (NASDAQ:TSLA) — in this case, a lithium supply deal between Volkswagen (OTC Pink:VLKAF,FWB:VOW) and Ganfeng Lithium (OTC Pink:GNENF,SZSE:002460).

“This shows the mindset of the major OEMs, and we may start to see deals of this nature announced in the cobalt market, particularly in the current oversupplied and low price environment,” he added.