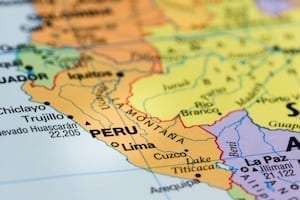 Peru’s zinc resources and favorable mining policies have attracted both major and junior resource companies to the country.

Peru is recognized as a major producer of copper, gold and silver. Yet the South American country also consistently ranks third in world zinc reserves and second in global zinc production.

Today, copper, gold and zinc represent about half of the value of the country’s total export revenues.

Zinc production in Peru dates back to the pre-Colonial era, long before the Spanish arrived and began mining wealth from the Central Andes. La Oroya, Peru’s first modern zinc refinery, started operations in 1922, and by the end of the 20th century the South American country had become one of the world’s leading zinc producers.

Peru’s zinc-mining sector has benefited greatly from rising zinc prices. Continued strength in China’s steel industry and closures of zinc-producing mines across the globe helped zinc to become the top performer on the London Metal Exchange in 2016 and 2017.

A politically and economically stable country, Peru’s overall foreign investment laws and tax regime are highly supportive of the mining industry. In fact, the country’s mining industry is thriving and investment in the sector is on the rise.

Mining investment totaled more than $4.9 billion in 2017, according to the Ministry of Energy and Mines, representing a 15.7-percent increase over the previous year. The majority of these investments are concentrated in infrastructure and exploration — up 44.3 percent to $1.5 million, and up 34.2 percent to $492 million, respectively.

The impressive growth in Peru’s mining industry, according to a report by Scotiabank, is attributed in part to Peru’s simplification of the permitting process, which the government estimates will attract $10 billion worth of new projects in 2018. Scotiabank’s analysts have raised their growth estimate for 2018 mining investment in Peru from the previous forecast of 5 percent to 12 percent.

“Volcan’s operations are located in the richest polymetallic production area in Peru, producing some of the highest quality zinc concentrates,” said Glencore’s management. “The transaction will provide an increase and extension of Glencore’s zinc production profile and the opportunity for synergies with Glencore’s existing Peruvian zinc operations.”

Glencore also has a 33.75-percent interest in the large, low-cost Antamina copper-zinc mine in North-Central Peru. The mine accounts for 30 percent of Peru’s total zinc output, producing a reported 362,255 metric tons in the first 10 months of 2017, according the Ministry of Energy and Mines. Antamina is jointly held by some of the world’s largest corporations, including BHP Billiton (ASX:BHP,NYSE:BHP,LSE:BLT) (33.75 percent), Teck Resources (22.5 percent) and Mitsubishi (TSE:8058) (10 percent).

Glencore partner Trevali Mining (TSX:TV) brought the Santander mine in West-Central Peru back into production in 2013. The 2,000-tonne-per-day underground zinc-lead-silver mine and mill complex is expected to produce upwards of 57 million pounds of payable zinc concentrate. Trevali’s 2017 exploration program at Santander recently identified multiple zones of high-grade zinc mineralization at near-mine targets along the two primary mineralization trends on the property. The program is aimed at expanding the inferred resource in addition to upgrading inferred tonnages to measured and indicated status for future mine planning.

Zinc One Resources (TSXV:Z,FWB:RH33,OTCMKTS:ZZOF) is another Canada-based miner working to bring a Peruvian zinc mine back into production. The company owns the past-producing Bongará zinc mine, one of the world’s highest-grade zinc deposits, and the neighboring Charlotte Bongará zinc oxide project in North-Central Peru. While in production from 2007 to 2008, the mine produced zinc grades greater than 20 percent with recoveries of over 90 percent from surface and near-surface zinc oxide mineralization. Zinc One plans to complete a preliminary economic assessment in 2018, followed by a feasibility study in 2019, with commercial production slated for 2020.

2 responses to “Peru is a World Leader in Zinc Production”