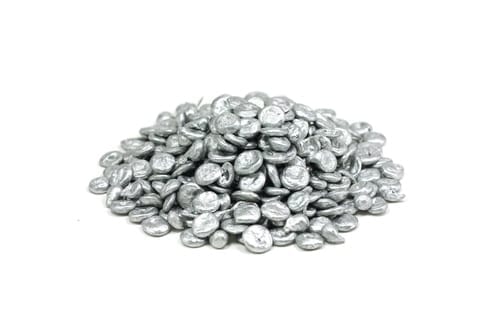 Here’s an overview of the main factors that impacted the zinc market in H1 2019, and what’s ahead for the rest of the year.

After hitting some significant rough patches in 2018, zinc spent the first half of 2019 trying to lick its wounds.

While the base metal gained notable strength at the beginning of Q2 on the heels of supply concerns, the growth was unfortunately short-lived.

Prices for the previously battered base metal generally trended upwards through the first few months of the year, minus hitting a few temporary US$100 to US$200 snags. Zinc’s numbers found themselves climbing from the new year’s starting point of US$2,460 per tonne to an H1 peak of US$3,016 on April 1. 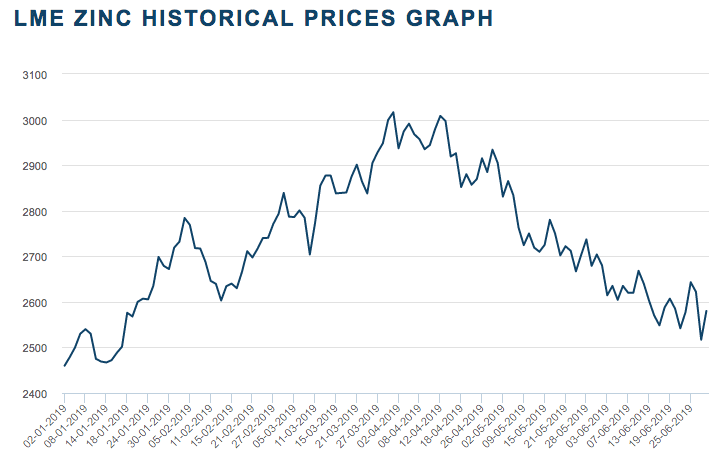 Price chart via the LME.

However, zinc’s rally proved to be brief; the metal’s movement on April 1 marked one of two times that the commodity would pass the US$3,000 mark in 2019. By the end of the month, pricing was back down in the US$2,900 range and would continue to fall for the next few months.

At the end of Q2, zinc prices had simmered down to US$2,580 on the London Metal Exchange (LME).

According to FocusEconomics Economist Javier Colato, the April spike in pricing happened primarily due to tightened supply.

“Zinc prices trended upwards through April mainly as a result of supply constraints. Stockpiles of the base metal at LME warehouses fell to their lowest levels in over two decades during this period, while inventories at the Shanghai Futures Exchange also remained historically low,” Colato told INN.

Colato added that the slip zinc prices faced after April was partly due to signs of slowing global growth, along with the perpetually turbulent relationship between China and the United States.

Over the last several months, the zinc space’s spotlight has shifted away from miners and towards smelters. In March, Wood Mackenzie Senior Research Analyst Rory Townsend spoke at the Prospectors and Developers Association of Canada convention in Toronto, where he highlighted smelters as having an upper hand in contract negotiations.

“With regards to the global benchmark contract, the concentrate surplus (that) we’ve forecast for this year should put an advantage in the hands of the smelters when it comes to the annum contract negotiations, and we’re expecting them to be certainly higher than what they were last year. We may well see escalators return to the contract,” he said at the event.

Echoing a similar sentiment to Townsend was colleague and Wood Mackenzie Research Director Chris Parker, who told INN that smelter production is the “key element” in zinc supply and demand.

“For the last seven years, annual global zinc consumption has been met in full only with a drawdown of exchange and unreported stocks. Refined inventory is now very low, there is little scope for further substantial drawdown and consumption can only be met by increased smelter output.”

In terms of actual production, Townsend noted a handful of projects that are anticipated to step up contributions in the coming years. These include Glencore’s (LSE:GLEN,OTC Pink:GLNCY) Lady Loretta and McArthur River assets, which are currently increasing production, along with projects and restarts ramping up such as MMG’s (HKEX:1208) Dugald River and Heron Resources’ (ASX:HRR) Woodlawn.

According to Townsend, this up-and-coming pipeline is set to put the global concentrate market into a surplus in the coming years, hitting a peak of 800,000 tonnes per year in 2020 and 2021.

Chiming in on the supply-side growth was Karen Norton, senior analyst at Refinitiv, formerly known as Thomson Reuters Financial and Risk.

“New mine supply is coming through, and we are looking at 2 percent growth this year after a 2.7 percent rise last year. Despite reported smelter bottlenecks, refined production is picking up pace as more new mine supply comes on stream, while increasingly there will be insufficient demand-side impetus to offset, with forecast growth this year of less than 1 percent,” she told INN.

While zinc concentrate is docketed to boom in the coming years, other analysts are concerned about the potential for a shortage in the refined market. Elaborating further on his previous point, Parker explained that optimistic projections regarding zinc supply may end up being shortsighted.

“Smelter output so far this year has underperformed, especially in China. There is a risk that global refined production will not pick up as we project. This increases the probability of a further tightening of the refined market,” he explained.

On the flipside, he also noted that China could end up providing a silver lining to zinc demand.

“Year-to-date growth in galvanised sheet production is almost universally down in response to softer automotive output. The one bright spark is China, where economic activity is slowing but investment in zinc-intensive infrastructure sectors is being supported by the authorities and zinc demand growth is positive,” he told INN.

Challenging Parker’s sentiment about zinc demand was Colin Hamilton, managing director of commodities research at BMO Capital Markets. While he thinks that the refined market remains “extremely tight” — adding that the raw material side has been easing — Hamilton expressed concerns about a slowing automotive market.

“The other thing I’ll say about zinc is demand has been disappointing. A lot of zinc goes into galvanized steel … (and) much of that goes into the auto industry. The lack of growth in global autos is a bit of a challenge,” he commented.

As Hamilton mentioned, one of zinc’s biggest roles is in galvanization, which entails adding a protective layer of the metal to steel or iron to help prevent rusting. As such, zinc is commonly used in the automotive industry. However, recent reports out of China, the world’s biggest automaker, have indicated that the car market is simmering.

According to Reuters, car sales out of the major nation dropped 14.6 percent this past April compared to the same month in 2018. This was the industry’s 10th consecutive month in the red, as sales were down 5.2 percent in March and 14 percent in February.

As zinc’s refined market continues to sit in a tightened state, experts are preparing for a boost in prices later this year. However, there are mixed opinions about how far growth will go in the coming months.

“An appreciation of the real market fundamentals and a reversal of short selling sentiment should lead to a pick up in the price to above US$3,000 in Q4 and Q1 2020 before retreating later in 2020 on higher refined production. Even so, the principal risk for 2020 remains with smelter capacity utilisation,” Parker forecasted.

While Parker has a bullish stance on the base metal going forward, others are maintaining a sense of optimism about zinc’s price, but staying on the bearish side of the fence.

“Analysts project prices to bounce back due in large part to the significant supply shortfall that is expected to persist in the global market and hopes that the trade spat between China and the United States will gradually improve. All in all, we see prices rising through year end, averaging US$2,693 in Q4 2019,” Colato told INN.

In a July commodity forecast report from FocusEconomics, firms polled had a median estimate of US$2,625 in Q3 and US$2,670 in Q4. The biggest bull in the Q3 forecast was Oxford Economics with a prediction of US$2,877, while Citigroup Global Markets was the biggest bear at US$2,400.

As for Q4, Oxford was tied with Pezco Economics as the biggest bull with a forecast of US$2,906; Citigroup remained the most bearish of the group with its prediction of zinc prices averaging US$2,300.