What’s the zinc outlook for 2019? Experts and CEOs share their thoughts on what’s ahead for the base metal next year.

Zinc has had a bruiser of a year, with prices for the unloved metal racing fellow base metals to the bottom of the pile since the trade war kicked off in earnest over June and July.

While supply continues to dry up and stockpiles continue to fall, prices haven’t responded in any meaningful way, leading zinc to fall over 24 percent year-to-date (as of December 14).

Zinc experts — both analysts and company leaders — think there’s a light at the end of the tunnel though, with a short-term recovery in the cards.

Over 2018 zinc has languished well below its base metal compatriots, falling as low as 32 percent under its starting point of US$3,375 a tonne to US$2,285 in mid-September.

Compare that to copper on the same day (September 17), down 18 percent year-to-date, and nickel, down 3.5 percent (though nickel rose partway through the year, while other base metals did not).

Looking at the LME chart below, as of mid-December zinc has recovered somewhat, up to US$2,555 — though still 24 percent below its January 1 price. 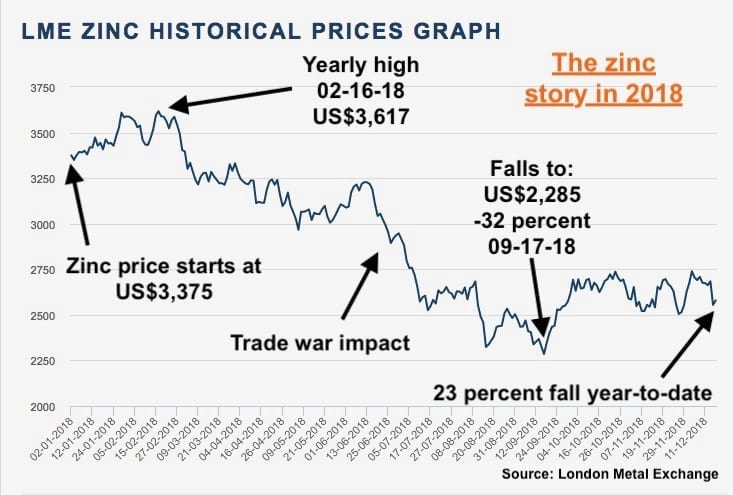 Various analysts through the year have stood by the claim that zinc’s fundamentals are solid, and negative sentiment is to blame for the metal’s price in 2018 — which was perhaps more of a correction.

Helen O’Cleary, senior analyst at CRU Group, told the Investing News Network (INN) that the zinc price had been “buoyed by investors front running the deficit story, and had been outperforming the rest of the LME metals for some time.”

The trade war still got slapped with blame for bearish sentiment though.

“Galvanized sheet trade has been directly affected by Section 232 tariffs on steel products, and although US galvanized sheet prices increased to cover the 25-percent duty, buyers have become more cautious,” she said.

Andrew Thomas, research director at Wood Mackenzie, said much the same, saying prices for zinc had been ahead of fundamentals.

“By the February peak the concentrate market had been tight for 15 months, but the metal market was still adequately supplied,” he commented.

Thomas said that the US$3,600 value for zinc prices reached in mid-February 2018 was the peak, and “profit taking [and] short selling lent momentum to the retreat” from there.

He said that the biggest story of 2018 (and heading into 2019) was smelter capacity in China. A combination of poor economics and an ongoing environmental crackdown has resulted in Chinese smelter production falling in 2018.

“Whilst economics should improve next year, the big question will be: will smelters be able to complete environmental upgrades [to] increase production levels in excess of those seen in 2015 and 2016, and prevent the tightness in the metal market from becoming too extreme,” he said.

Stefan Ioannou of Cormark Securities said that zinc shaped up through 2018 to be in line for a supply crunch, with large projects drying up and inventories falling.

Ioannou noted that as with other base metals, “the trade war is really what was sailing the boat.”

Feeding into previous comments about a supply crunch, Ioannou pointed to an early 2018 fall in treatment charges as a sign of turbulence.

“What that means is that the smelters — basically the end users of a mine supply — realized that there’s a shortage [in supply] and they’re willing to charge less to process it.”

Read INN’s story from September for more thoughts from Ioannou on the coming supply crunch.

Zinc prices have stayed down through the second half of 2018, failing to recover from the shock of the trade war. However, stockpiles are still being drawn down as a supply shortfall hits inventories. As of mid-December, LME zinc stockpiles stood at 122,000 tonnes — down from 250,000 tonnes in late July.

O’Cleary said that CRU expects a short-term recovery of the zinc price into early 2019 “as refined metal stocks will remain at critical levels until increased mine output starts to feed through to an increase in smelter output.”

“We believe that the metal supply crunch is coming to an end and that the refined market will return to balance in 2019,” she added.

Brian Leni of Junior Stock Review said that while the trade war has depressed prices, “it isn’t the whole story. When any commodity is hitting new five-year highs, new or hidden supply caches begin to feed the market.”

He added, “however, LME zinc inventories remain very low and, in my opinion, still give upside potential to the zinc price. While I do believe there is potential for a nice spike in the price, especially upon news of a resolution in the US and China trade war, I don’t think it will be sustainable over the long term.”

Leni said that today’s lower zinc price is “a good gauge for the long term, with the proviso that there is certainly room for a nice spike due to the very low visible LME inventories.”

As mentioned, Thomas said the big story for zinc was smelter activity in China, which is now giving way to mine supply.

“The underperformance of Chinese smelters has depleted Chinese stocks of refined metal, which are close to record lows and supported the recovery in the zinc price from less than $2,300 in September to current levels,” he said.

“With mine supply now starting to come onstream, the supply crunch now revolves around smelter production — historically the shortfall in rest-of-world smelter capacity has been more than compensated for by new smelter capacity in China. However, the pace of capacity expansion has slowed. As a consequence there is a risk of a structural smelter bottleneck developing in zinc.”

Meanwhile, Ioannou said that troubled zinc smelter Nyrstar’s (EBR:NYR) woes in 2018 are a sign of the very dry supply line for the metal.

“[Nyrstar has] always been a successful smelting business, and a few years back they decided to make the move to become a fully integrated mine-through-smelting company. And I think they discovered fairly quickly that the mining game is a lot tighter and a lot less forgiving than the smelting business.”

Besides analysts, INN also asked CEOs operating in the zinc space how they felt about 2018 now it is behind them, and what they think 2019 will hold.

Steve Williams, CEO of Pasinex Resources (CSE:PSE), said that prices remaining so low is “odd” as there are only eight or nine days of zinc held in visible stockpiles.

“We’re still very low on stock, yet the zinc price has come down. I think part of that is that the market is anticipating more production coming on. There’s a mine reopened in Australia, and I think the market’s already sort of anticipated that a bit into the price. But normally you would think that the zinc price should be a bit higher. It’s sort of an unusual position right at the moment,” he said.

Among other CEOs, investor sentiment was the main challenge seen for the base metal in 2018.

CEO of Group Eleven Resources (TSXV:ZNG) Bart Jaworski said that he expected a “more bullish tone in the zinc market in 2019 given hiccups in new production and growing optimism on zinc demand used in fertilizers and batteries.”

He also expected trade war rhetoric to subside — a sentiment shared by Brandon Macdonald of Fireweed Zinc (TSXV:FWZ), who expected a rebound back up to 2018 prices in a “double peak.”

Macdonald said he based this sentiment on continued tightness in the market, while Dr. Mark Cruise, CEO of Trevali Mining (TSX:TV), said that his optimism for zinc is based on continued drawdowns of global refined zinc inventories.

Ioannou said that at Cormark, a price prediction of US$1.35 a pound (US$2,976.2 a tonne) is the average for the next year going forward, a price he said is “somewhat conservative.”

“We’re down into sort of a 120,000-tonne range on the LME right now. And quickly approaching 100,000 tonnes, and when you add up the visible supply that’s out there right now, we’re down to half a week of global consumption, which I think for argument’s sake is pretty critical already.”

“[The] last time we saw zinc inventories on the LME below 100,000 tonnes, the zinc price spiked to US$2 a pound [US$4,409.24 a tonne] … I think just based on that supply concern, I think if we see any waning in the Trump trade war narrative and people start to take a closer look at what the visible inventories are telling them … we could see prices spike significantly next year,” he said.

Wood Mackenzie’s Thomas was closer to Ioannou’s sentiments. “We forecast double-digit growth in Chinese smelter production in 2019,” he said.

“It’s important to understand that even if this is achieved, the metal market is still forecast to experience further declines in stocks and remain in deficit. As a consequence the price is projected to revisit, and potentially exceed, the highs seen in February [2018].”

As mentioned, Junior Stock Review’s Leni believes a spike in price is on the cards due to low inventories — though that could be soured by any resolution to the trade war.

Leni said the big story for 2018, and going into 2019, is zinc-air batteries, which he said he increasingly heard and read about this year.

“Unlike the narrative-heavy vanadium redox battery storylines, zinc-air batteries are legit, and I believe could be an emerging major demand source for zinc in the future.”

Zinc outlook 2019: What’s ahead for companies

Each of the zinc CEOs polled by INN shared what their respective companies were working on through 2018 and into the future.

ZincX Resources (TSXV:ZNX) President and CEO Peeyush Varshney said that his company recently completed a preliminary economic study on its Cardiac Creek deposit within its Akie property in BC — a development that shifted ZincX’s share price by 200 percent.

For Trevali, Dr. Cruise said that 2018 was the first full year of ownership of its two African zinc mines, Perkoa (in Burkina Faso) and Rosh Pinah (in Namibia).

“There was an integration process, which is now largely complete, that did introduce some challenges and resulted in some production and shipping/logistics setbacks at our Rosh Pinah operation that negatively affected our output; however, this was offset by superior operating results from Perkoa.”

Cruise said that going forward, Trevali will be working on optimizing its operations through organic growth initiatives at some of its operating mines.

For his part, Williams at Pasinex said investors should keep an eye on his company’s drilling in Nevada.

“We’ve got what we think is a SEDEX-style zinc deposit in Nevada, and so we’ll be drilling that again in the spring of next year. So definitely watch that because that one we think can be exciting,” he said.

“And then we’re also drilling in Turkey. We think there’s a lot more zinc around where we are. We’re actually drilling at the property due north of Pinargozu, the mine, right at the moment. And so hopefully later this year we should have some results coming out.”

Editorial Disclosure: Pasinex Resources, Trevali Mining and Fireweed Zinc are clients of the Investing News Network. This article is not paid-for content.