What trends drove nickel prices in 2017? We run through top supply, demand and price catalysts in this overview of the space.

At the end of 2016, nickel was trading at $10,010 per tonne, and many market watchers were anticipating higher prices in the face of rising demand and short supply.
What actually happened to prices and why? As 2017 comes to a close, the Investing News Network is looking back at the main trends in the nickel space this year, from issues in top nickel-producing countries to electric vehicle optimism.
Read on to learn what happened in the nickel market in 2017, and what market participants had to say during each quarter of the year.

The year began with the Indonesian government announcing plans to loosen a ban on nickel ore exports. While nickel pig iron production declined in China in 2016, the International Nickel Study Group (INSG) said recently that Indonesia’s move could lead to increased output in 2017. It also sees nickel pig iron production increasing in Indonesia itself this year as new projects ramp up.
In February, nickel prices hit a three-week high after Regina Lopez, the Philippines’ acting environment secretary, ordered the closure of over half the country’s mines due to environmental concerns. The Philippines is the top producer of nickel, and when Lopez failed to secure a permanent government position, prices for the metal fell on concerns that mines in the country could come back online.

Andrew Mitchell, Wood Mackenzie’s principal nickel analyst, said Chinese stainless demand weakened in Q2, and “we saw many plants cut production.” At the start of June, prices reached an 11-month low of $8,700, leaving them down over 10 percent year-to-date. “That situation [in China] was in reverse by late June, and since then Chinese stainless production has ramped up quite strongly,” he added.
Low nickel prices have affected even major miners this year. In fact, midway through the year, Brazil’s Vale (NYSE:VALE) said it was reviewing its New Caledonia operations. Spokesperson Cory McPhee told Reuters at the time, “[t]he nickel price today is languishing at around $9,000 a tonne with no indication of recovery in the near-term. This has forced us to reassess all areas of the nickel business, including our operations in New Caledonia, which continue to lose money at these prices.”
Commenting on the current nickel price environment, Brian Leni, founder of the Junior Stock Review, said, “current nickel spot prices leave 25 percent of the nickel producers in negative cashflow. If this trend continues, producers will go out of business and supply will fall further. A rise in the nickel price isn’t necessarily imminent, but it’s inevitable.”

As the year continued, nickel began to receive increasing attention for its role in lithium-ion batteries, which are used to power electric vehicles. Some lithium-ion battery manufacturers said they are looking for ways to reduce the amount of cobalt used in these batteries in order to cut costs.
In fact, in August, Korean firm SK Innovation (KRX:096770) began commercial production of mid- and large-sized lithium-ion batteries composed of 80 percent nickel, 10 percent cobalt and 10 percent manganese. That’s compared to the typical lithium-ion battery ratio of 60 percent nickel, 20 percent cobalt and 20 percent manganese. This and other developments excited market participants, though overall most experts agree that electric vehicle demand is still only a minor nickel price driver.
In its October Commodity Price Index, Scotiabank notes that “a gradual reduction of nickel inventories is forecast to put soft upward pressure on prices, which are expected to average $4.65 per lb in 2017.” However, Rory Johnston, commodity economist at Scotiabank, noted, “if you see more and more enthusiasm for nickel on the back of rising forecasts for electric vehicle sales for instance, you could see nickel rise faster than that outlook.”

On November 1, nickel prices reached $13,030, their highest level since June 2015, on further anticipation of electric vehicle demand.
Mitchell commented, “excited discussions around LME week sent the [nickel] price soaring — rising almost 10 percent during the course of a week — even though the EV story is a longer-term driver.” The INSG notes that electric vehicle demand will represent just 3 percent of nickel demand in 2017 compared to the two-thirds of supply that goes toward stainless steel.
Later in the month, the Philippines Mines and Geosciences Bureau reported that only 17 of the country’s 30 nickel mines recorded output in the first nine months of the year, resulting in an 11-percent drop in output. The country’s president said he will uphold the ban on open-pit mining introduced by Lopez despite a recommendation that it be lifted. The government is also reviewing whether closed mines will be eligible to reopen and has said it plans to finish the review by the end of 2017.
Nickel prices were at $11,230 as of December, which was 12 percent lower month-on-month. However, prices were up 12.7 percent on a year-to-date basis, and were 0.7 percent higher than on the same day of last year. FocusEconomics explains in its latest report that prices fell on increasing supply from Indonesia as well as weaker demand from China after a period of restocking and measures taken to curb pollution in the country. China’s cooling housing market is also expected to exercise downward pressure on nickel demand and prices since nickel is used in steelmaking. 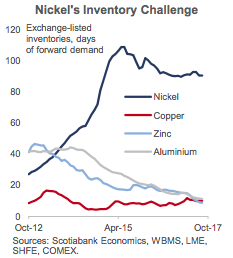 Commenting on the nickel space as a whole in 2017, Mitchell said, “we expect the market to be in deficit for the year, with prices averaging around $10,400. But this average hides the fact that prices will have risen from $9,981 in January to currently $12,800 at the beginning of November, a spectacular 28-percent rise and [nickel’s] highest level for nearly 18 months.”
The INSG is also predicting a market deficit for 2017. In its latest update, the organization said world primary nickel production was 1.991 million tonnes in 2016, and it is projected to increase to 2.052 million tonnes in 2017. Meanwhile, world primary nickel usage was 2.037 million tonnes in 2016, but should increase to 2.15 million tonnes in 2017.
For more information on the nickel market, stay tuned for our 2018 outlook.
Don’t forget to follow us @INN_Resource for real-time news updates!
Securities Disclosure: I, Melissa Shaw, hold no direct investment interest in any company mentioned in this article.
Editorial Disclosure: The Investing News Network does not guarantee the accuracy or thoroughness of the information reported in the interviews it conducts. The opinions expressed in these interviews do not reflect the opinions of the Investing News Network and do not constitute investment advice. All readers are encouraged to perform their own due diligence.