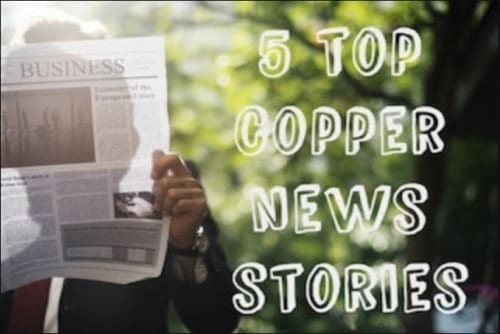 Copper spent most of 2019 at the mercy of the US-China trade war, with its price improving and declining alongside news of the talks.

In the first half of the year, copper’s price made gains only to begin to fall towards the end of Q2, a trend that continued on well into the third quarter. Copper’s price began to recover in Q4, but it has not yet surpassed its previous highs from Q1.

Here, the Investing News Network (INN) takes a look back on the most popular copper stories over the past 12 months.

At Mines and Money New York, Adam Rozencwajg of Goehring & Rozencwajg told INN that he and his firm believe that base metals like copper will see price rises in the coming years as demand increases.

Rozencwajg predicted China to be a major demand source for copper in the future, and stated that India could also be a major player in the industry if its mining industry can catch up to its per capita GDP.

Rozencwajg also shared his doubts regarding the popular idea that electric vehicles (EVs) will take over the transportation industry.

“While it will continue to grow and while the demand for it is there — as what we like to call a ‘plaything’ for the wealthy — I think the ability of EVs to really displace internal combustion engines on a broad basis will be fairly limited,” he said.

CRU Group Principal Analyst Robert Edwards spoke to INN in April about the copper market, sharing his thoughts regarding a potential deficit. According to Edwards, the real question is when and to what extent the deficit will hit.

“That’s a medium-term story that’s obviously been around for a number of years now. And I think it’s certainly true that, if you’re looking … at least five years ahead, there is, as we stand today, a shortage of copper coming,” he said.

In January, the government of Indonesia told the market to expect significantly reduced copper concentrate exports in addition to lower output from its recently nationalized Grasberg mine. The news came after the government struck a deal with former owner-operator Freeport-McMoRan (NYSE:FCX) and its joint venture partner Rio Tinto (ASX:RIO,NYSE:RIO,LSE:RIO).

Freeport, in a 2018 quarterly report, said that Grasberg’s copper output would decrease in the coming years as the mine transitioned from open pit to underground between 2019 and 2020, a transition expected to be completed in 2022.

Karen Norton of Refinitiv told INN at the time that Grasberg’s lower output was an expectation and was factored into previous copper outlooks.

“(It will) be one of the factors contributing to forecast minimal growth in global copper mine output this year,” she said. “There is not much room for maneuver, though, and that growth could easily turn negative if major mines fall short of expectations.”

The International Copper Study Group (ICSG) released its copper forecast in May, in which it states that China is set to remain the world’s top contributor of copper through to the end of 2020. The ICSG expects a deficit of 190,000 metric tons in 2019 and 250,000 metric tons in 2020 — a jump from its previous 2019 deficit prediction, which was 65,000 metric tons.

“ICSG recognizes that global market balances can vary from those projected owing to numerous factors that could alter projections for both production and usage, namely the current US-China trade issues (and the) strength of the global economy, especially the Chinese,” the report reads.

With that said, ICSG still expects global refined production growth of 2.8 percent this year and a 1.2 percent increase in 2020.

In March, Chilean miner Antofagasta (LSE:ANTO,OTC Pink:ANFGF) announced that it would soon enter an agreement with BHP (ASX:BHP,NYSE:BHP,LSE:BHP) over access to desalinated water. This was an important step in developing the Zaldivar copper mine, located in the Atacama region, one of the driest places in the world.

“We have been negotiating for three or four months, and we are nearing the end of that. I am hopeful that we will reach a good agreement,” said Antofagasta Vice President of Administration and Finance Alfredo Atucha in an interview with Chilean media.

The Zaldivar mine was already fully operational, producing 55,000 metric tons of copper in 2017, but Antofagasta hopes to extend operations to 2031, a move that requires additional water.

Securities Disclosure: I, Sasha Dhesi, currently hold no direct investment interest in any company mentioned in this article.

Rio Tinto to Invest US$1 Billion to Reach Zero Emissions Goal by 2050
Gold Price Well Above US$1,600 as COVID-19 Cases Increase
Indonesia: Coronavirus Will Delay US$11 Billion in Projects
Pharma Space Facing Challenges Due to Uncertain Policies