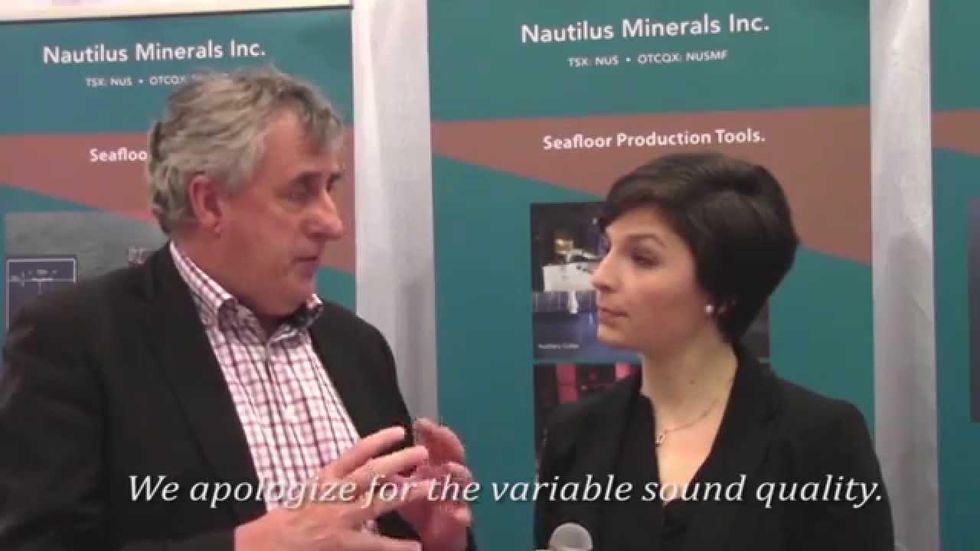 To be sure, Nautilus Minerals is one of the more interesting mining companies out there. Its project, Solwara 1, lies on the seafloor near Papua New Guinea, where the company is planning to mine high-grade copper and gold deposits.

To be sure, Nautilus Minerals (TSX:NUS) is one of the more interesting mining companies out there. Its project, Solwara 1, lies on the seafloor near Papua New Guinea, where the company is planning to mine high-grade copper and gold deposits.

To find out a bit more about underwater mining, Resource Investing News (RIN) had a chat with Mike Johnston, CEO of Nautilus, at the 2015 PDAC conference in Toronto. In the interview below, Johnston discusses what makes Solwara 1 so high grade, and speaks to questions about the environmental impacts of underwater mining.

He also touches on New Zealand’s recent rejection of underwater mining projects, and about Nautilus’ partnership with the Papua New Guinean government. Overall, it was interesting to get some insight into the world of underwater mining and how Nautilus intends for its project to work.

RIN: The resource at Solwara 1 has an exceptionally high grade of 7 percent copper and 6 grams per tonne gold. Why is that?

That’s where you end up with [high-grade] material like this. So very, very high grade. So all the copper that’s in that fluid gets dropped within half a meter … and it forms these chimney deposits, [which are] very high grade. And in the case of Solwara 1, and most of our other systems, they also contain a lot of precious metals — as you said, 5 grams of gold, which on land that would be a high-grade gold deposit.

RIN: Okay. And given all those benefits you just mentioned, New Zealand did reject underwater mining recently. How is Nautilus reassuring investors in light of that?

MJ: Well, the two projects that have been in the news from New Zealand recently are both very shallow-water projects. They’re what we call “dredging” — the first project was in about 50 meters or 60 meters of water depth, so quite shallow. Ours is [at about] 1,500 meters, so we’re in very deep water. The second [New Zealand] project was at a water depth of about 200 to 250 meters.

Both projects were given mining licenses by the New Zealand government. The problem is actually in the legislation in New Zealand, and it’s specific to New Zealand. The environmental legislation has been written by their environmental department and doesn’t allow any development. This is just blatantly ridiculous. They either have to fix that or they’ve got a serious problem.

RIN: Speaking of the environment, you must get questions about environmental impact. How does Solwara 1 affect the deep-sea, mid-sea and surface levels, and what is Nautilus doing to mitigate that?

MJ: What we did was a very extensive environmental impact assessment of the project — right at the start, before we submitted our permit. In that process, we did a lot of independent studies by researchers from the United States, Australia, Canada, Europe, and those experts in their fields all produced various reports about the project and about the Solwara 1 site.

Critical to those assessments was the full water column current analyses which we did … and those studies show that it’s physically impossible for any activities on the seafloor to impact above 1,300 meters water depth. So everything happens below 1,300 meters. That’s due to the fact that deep water is colder and denser than shallow water, and the two don’t mix — in Solwara 1, they don’t mix at all.

Where they do mix on the planet is at the poles, when the surface water gets cooled right down and starts to freeze. Then it’s at the same temperature and density as the deep-sea water … so that keeps everything within the confines of the mine.

Our system is designed with a very, very strong environmental focus. What we have is a steel riser system and a pump at the bottom of that riser system. We pump the mined material from the bottom of the ocean up into the vessel, where we separate the ore from the water and the slurry. The water then gets pumped down return pipes — steel pipes on the side of the main pipe — all the way down to where the pump is at 1,500 meters and then it’s exhaust at that point. It goes right back to where it came from, but before it goes back, we actually filter it to 8 microns. [That’s] actually arguably cleaner than it is down in the bottom, because there’s ash and all sorts of volcanic activity happening down on the bottom of the sea. So we put it back probably cleaner than what it is when we take it out.

RIN: Okay. And finally, you’ve partnered with the Papua New Guinean government for the project. What sort of support have you seen from it?

MJ: The Papua New Guinea government is very supportive of the mining and petroleum industry in general. The prime minister, and various ministers, have said to me personally that they no longer want to be on the sidelines of resource development in their own country. They want to be active participants.

The government now has a policy of taking equity and new projects. They really like the Solwara 1 project … because of all the benefits; it doesn’t have waste, we don’t have tailings in our project. We don’t have waste dumps. All the things which people don’t like about mining on land essentially are not there for deep-sea mining.

The government’s ownership is also separated from the regulatory arms of the government. So the Mineral Resources Authority, which is a separate entity that manages mining projects and their compliance, is separate to Petromin [PNG Holdings]. They have different ministers. And then the environment department is also responsible for monitoring environmental compliance — with your mining license conditions, your environmental conditions — and that’s got a separate minister and is separate from Petromin as well.

The government separates its regulatory and investment arms, and is treated just like any other investor. It’s a very good system.

RIN: Thanks for joining me.

MJ: It’s been a pleasure.