After rallying 5.5 percent on the back of the Chilean earthquake, copper prices dipped, ranging between lows of $7,255 per tonne and highs at $7,634 per tonne on the LME. 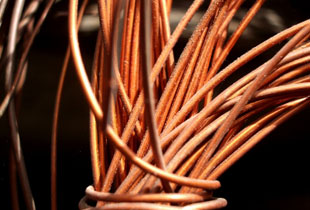 After rallying 5.5 percent on the back of the Chilean earthquake, copper prices dipped, ranging between lows of $7,255 per tonne and highs at $7,634 per tonne on the LME.  Tuesday, prices hit $7,545.00 per tonne. Copper’s recent descent is dollar-driven. Fears over the stability of the Euro-zone economies are making the greenback a relatively strong currency, which in turn is making copper and other dollar dominated commodities more expensive for holders of other currencies.

The red metal’s downside is being capped by declining stocks. LME inventories have fallen 9,000 tonnes since March 2 to 541,575 tonnes. Cancelled warrants- evidence that near term inventories will continue to shrink-jumped to hit 26,725 tonnes Monday, up from 3,625 tonnes on Feb. 8.

Over in New York, the COMEX was taking cues from the weak LME market. Upon opening on Tuesday, copper futures were pushed back by both the greenback and investor caution over risky assets. Most active copper for May delivery dove 3.90 cents, or 1.14 per cent, to $3.3715 per lb.  Early day trading range spanned from $3.355 to $3.425.  As of Monday, COMEX copper stocks were steady at 102,192 short tonnes.

The markets will look to Thursday’s trade data from China, the world’s largest metals consumer. Analysts are not optimistic, as China clearly has abundant stockpiles after importing copious amounts of the red metal in 2009. In February, stockpiles in China hit their highest level in more than seven years. Clearly, the country will draw down stockpiles to support its thirst for copper before they will import more of the metal.

Preliminary data out of the country is in support of declining imports. Traders estimate that imports of refined copper, the most popular form in global and Chinese markets, are flat to slightly lower from a month ago. The week long Lunar New Year holiday celebrated in February is expected to affect all import data as the country shuts down in observance of the new year.  Chinese traders admit that the length of the holiday in the shortened February month makes it difficult for importers to process new shipments.

Li Yuhuang, the chairman of Jiangxi Copper Co– the largest integrated copper producer on the mainland- predicts that for the first half of 2010 copper will continue its ascent.  Betting on a tight copper market, the company will push output to 900,000 short tonnes and will remain on the lookout for acquisition opportunities of high-grade copper mines in Zambia, Congo, and other African countries. However, Mr. Li is not as optimistic on what will happen in the second half of the year. China’s copper demand boomed last year thanks to government measures to support the economy with US $585 billion stimulus plans. But, for 2010 the government has started to tighten money supply in an effort to avoid short-term speculative bubbles.

Factors such as high stockpiles, tightening money supply and decreasing demand in the number one copper consumer don’t paint a good picture for this year’s market. These facts have prompted Goldman Sachs to change its position on the copper market.  The investment firm ended its recommendation to bet on higher copper prices because of concern that economic recovery in developed markets isn’t on “solid footing.”

London based copper producer Antofagasta fell short of analysts’ expectations for 2009 net income.  In a statement issued on Monday, Antofagasta declared its net income dropped to $667.7 million, from $1.71 billion in 2008, missing the $686 million median mark of analyst estimates. Full-year profit fell 61 per cent because of lower prices and output. Antofagasta produced 442,500 metric tonnes of copper, down from 477,700 tonnes in 2008. The average price of copper for immediate delivery on the London Metal Exchange dropped 26 per cent to $5,178 a tonne.  Full year profit fell 61 per cent as low copper prices and slumping demand eroded the company’s bottom line.  Antofagasta will pay its shareholders a final dividend for 2009 of 20 cents per share.