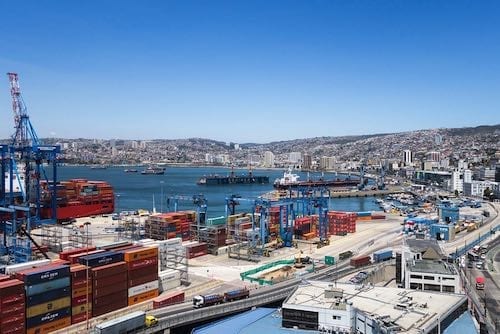 Workers at the world’s largest copper mine will walk off the job on Tuesday in solidarity with protesters around the country.

Protests across Chile have spread into the resources sector as workers at mines and ports walk off the job in solidarity with protesters.

Eleven people have now died in the country, with protests against a 4 percent transit fare increase spiraling into rage about economic hardship.

“That was the straw that broke the camel’s back,” said Remi Piet, who is senior director at Americas Market Intelligence.

The protests have seen workers around the country announce strikes in solidarity. In the mining sector, workers in the union at BHP’s (ASX:BHP,NYSE:BHP,LSE:BLT) Escondida copper mine are set to walk off the job for at least one shift on Tuesday (October 22).

Workers with the Union Portuaria de Chile — which controls 20 ports up and down the coast — participated in a work stoppage on Monday (October 21). The union announced, “The reasons behind this mobilization are related to the broad and deep social discontent of the Chilean people.”

Chilean President Sebastian Pinera has gone as far as to say the country is “at war,” with trains, buses and factories torched in Santiago, cities placed under curfew and a state of emergency declared.

“What you have in Chile is a rise in inequality,” said Piet. Chile is known as a relatively wealthy and stable Latin American nation due to its mineral wealth and entrepreneurial business environment, he explained. “(However), we tend to completely forget that Chile is a deeply divided country — it’s a country where you have the lower end of the population struggling to live today.”

Cormark Securities Mining Analyst Stefan Ioannou said that, for the copper market, the Escondida halt is a major development to keep tabs on as other copper mine unions will likely do the same.

“With Escondida (striking), it’s hard to imagine others won’t follow suit,” he said, adding that the port stoppages could have an impact on concentrate sales.

Despite the problems thrown up by the union stoppages, Ioannou said that it is too early to tell what sort of impact the protests and related strikes will have.

“At the end of the day, from a resource perspective, obviously Chile’s the world’s number one copper producer, and any sort of nation-wide impact to the copper output, that’s going to affect the global copper outlook significantly,” he said.

“I think the coming days will be very telltale in regards to what the potential impact of that is again … it’s day one, and we’re waiting for (more) decisions again from port people and from mine people, and exactly which big mines are or aren’t participating.”

Ioannou noted that copper mining companies were staying quiet as of Monday, mentioning as an example Lundin Mining (TSX:LUN,OTC Pink:LUNMF), which is yet to release any news, but also owns its own port facilities.

“Aside from labor union issues at the mines — which again we haven’t heard anything about yet — they’re a little bit more insulated than some of the other guys that are shipping through third party ports,” said Ioannou.

Piet said that Chile could possibly see weeks of civil unrest as a result of the seemingly small increase in transit fares announced by the government last week, comparing the protesters to the yellow vest movement in France, which was founded on anger at rising costs of living.

He added that there will be an inevitable impact on the economy, especially if Pinera has to change his fiscal policy to quell the protesters.

“The wellbeing of Chile is really based on foreign investment. If Chile starts to be seen as a risky nation, then it can really trigger severe consequences for the economic future of Chile.”

On Monday, the copper price was tracking upwards — though not by much — at US$2.64 a pound.