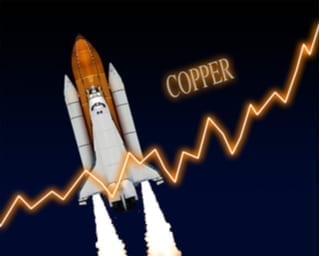 Copper was changing hands at its highest level in almost four years on Wednesday (December 27), on track for its biggest annual gain since 2010.
According to the Financial Times, the red metal hit $7,259 per tonne on Wednesday, a point it hasn’t seen since January 2014. Copper prices were buoyed largely by Chinese import data, and look set to end 2017 up 39 percent.
“China’s trade data lit the fire under copper. Sentiment is very bullish,” one copper trader told Reuters. The country’s copper imports reportedly rocketed up to 329,168 tonnes in November, up 19 percent year-on-year.


Give me my free report!
Market watchers are encouraged by those numbers, which are an improvement over lackluster copper imports seen in October. It’s worth noting that for the first 11 months of the year, China’s copper imports are down over 10 percent from the year-ago period.
Earlier in the week, copper prices were supported by news that Jiangxi Copper had been ordered to halt production for at least a week. Jiangxi Copper is China’s largest producer of copper, and the company had reportedly been told to stop work to allow for an assessment of local pollution levels.
“There could be some strong price performance into next week and the new year until there’s clarity on how much capacity is really getting affected,” Tai Wong of BMO Capital Markets said on Monday (December 25). Jiangxi Copper has since denied that it has received any orders to shut down.
Copper prices have been on the rise since mid-2017, after reaching a low point for the year in May. The base metal has performed better than many expected this year, with higher Chinese demand and increased supply disruptions being a couple of the factors that pushed it higher.
Analysts are cautiously optimistic about the red metal heading into 2018. Many anticipate a balanced market, though some are calling for a deficit. Others expect a deficit to hit further out — BMO Capital Markets has suggested 2019, while Thomson Reuters GFMS has said it may not come until 2020 or 2021. Prices are expected to increase further as the market tightens.
Don’t forget to follow us @INN_Resource for real-time updates!
Securities Disclosure: I, Charlotte McLeod, hold no direct investment interest in any company mentioned in this article.