Here’s an overview of the main factors that impacted the copper market in Q3 2019, and what’s ahead for the rest of the year.

Copper has had a turbulent third quarter, with prices heating up during July only to fall dramatically by September. Copper production also struggled, as both US and Chinese manufacturers reported lower-than-projected numbers.

With no end in view for US-China trade talks, analysts are forecasting that copper prices will remain shaky as the two powerhouses face off — particularly in light of additional factors, such as lower output of the red metal and protests at various mines.

Longer term, however, many analysts are calling for copper to increase in value as decarbonization comes into full effect and raises demand; this is expected to materialize in about three to five years.

With Q4 already in motion, the Investing News Network (INN) caught up with analysts, economists and experts alike to find out what’s ahead for copper supply, demand and prices. Here’s what they said.

Copper has started high and ended low these past few quarters, and Q3 was no exception. Copper hit its top point for the period in mid-July, when it reached US$6,065 per tonne on July 19. However, it began to drop dramatically in the following weeks, dipping below the US$5,800 mark by August 2 — a 4.9 percent decrease in two weeks. 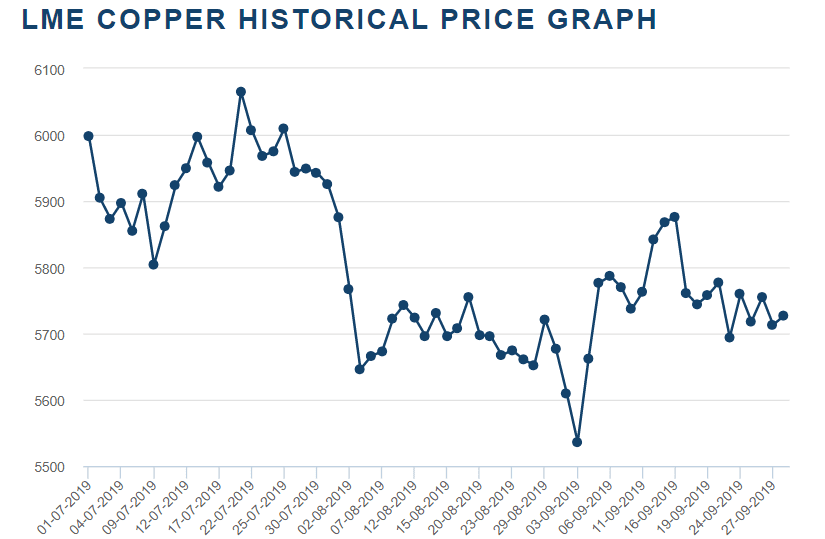 Copper struggled throughout the summer as trade talks between the US and China continued to stall, with both sides remaining steadfast in their demands.

According to Chris Berry, founder of House Mountain Partners, investors should not expect a drastic price increase in the coming quarter given the instability of trade talks between the US and China.

“The US essentially wants China to reconstruct their entire economic model and increase safeguards against intellectual property theft to level the playing field with the rest of the world,” said Berry. “The Chinese think they can wait until after November 2020, when the US presidential election will take place, to even consider seriously negotiating.

“Neither party here seems willing to budge, so this game of economic chicken will likely drag on to the detriment of the consumer, which is of course the engine of growth in the US and an increasing source of growth in China,” he added.

Copper hit its lowest price this past quarter on September 3, when it closed at US$5,536. The red metal quickly bounced back to US$5,576.50 two days later. The price of copper spent the rest of September oscillating between US$5,777 and US$5,694.

Copper supply remains in flux, with both production concerns and geopolitical unrest affecting output and the market’s needs.

Throughout Q3, copper production struggled amid protests in South America and floods in Chile, both of which impacted output. In July, Wood Mackenzie reported that there had been more mine disruptions by mid-2019 than there were in 2018 as a whole.

Among others, the third quarter brought continued protests at MMG’s (ASX:MMG,HKEX:1208) Las Bambas mine; the unrest resumed on September 22 and has since rolled over into Q4.

The fourth quarter has already seen other disruptions as well, with Ecuador’s only large-scale copper mine halting operations amid protests against fuel-based subsidies.

With disruptions slowing the growth of worldwide copper supply, analysts are recommending that investors pay attention to global activity, trade tensions and other similar geopolitical concerns.

“All other copper scrap would remain classified as solid waste, and likely banned from being imported from 2020 onwards,” said Joannides. “The outcome of these policy changes could lead to tighter scrap availability in China and could support healthier demand for refined copper over the next few months. If this scenario would play out, this would provide support to prices and limit movement to the downside.”

Meanwhile, Berry remains cautiously optimistic regarding the stability of copper production, if one looks at broad-based trends rather than month to month, despite the recent slowdown.

“When looking at manufacturing PMI surveys, it’s clear that while there is still ample evidence of manufacturing expansion, this trend has slowed in recent months,” said Berry. “This should come as no real surprise as the current economic expansion in the United States is entering its 122nd month — the longest in its history.”

According to FocusEconomics, supply has been weighed down these past few months due to low manufacturing across the board, whether it be China, the US or Germany. The International Copper Study Group reported that the global copper output has not seen a major uptick since it reported lower numbers in the first half of the year.

Overall, copper’s global supply has been lower than anticipated, in part due to disruptions at mines, but also due to the expected decrease following any market expansion. Copper may see another decline in supply if China’s drafted proposal comes to fruition.

According to Berry, paying attention to labor disputes in South America will likely be the best way to understand copper supply in Q4.

“With respect to supply shocks in copper, watching Chile and other major producers to see how labor issues and funding for expansions are handled will be key,” he said.

“I think the market’s attention is firmly focused on the demand side of fundamentals. So economic data releases will be closely watched. We think that the construction/property sector in China will turn down in the coming months, which has negative implications for the copper market,” she said.

Analysts have speculated that there will be an increase in demand for copper as decarbonization takes hold globally, but this increase should not affect the copper market for another three to five years.

In July, Wood Mackenzie forecasted that global copper consumption will increase by 250 percent by 2030 as electric vehicles (EVs) increase in popularity. Due to copper’s conductive properties, which make it especially efficient, the metal will remain a key part of EV charging stations.

While increased consumption is likely, Berry argued that this alone will not push copper prices higher in the way that it did for lithium and cobalt.

“The copper market benefits from its overall size, liquidity and price transparency. Underinvestment in adequate supply and a lack of available feed from sources such as recycling are more likely to put upward pressure on the copper price,” he said.

Although analysts expect copper to remain fairly consistent, the biggest curveball is still US-China trade talks. However, the resolution should not drastically change the structure of the market.

“I would think an announcement of a deal would cause a melt up in equity markets, but not do much to restructure the global trading system,” said Berry. “I still think the copper market is more attuned to overall global economic growth trends (as measured by GDP, PMI surveys or industrial production), which look quite shaky at the moment. I don’t believe that a trade deal would really structurally change the copper market at all.”

Bain is unconvinced a deal will come to fruition at all between the two powers.

“We are skeptical that any meaningful deal will be reached. The sides are too far apart. China is not going to promise to change its industrial policies. The proposed tariffs may be delayed, but ultimately we think that trade tensions will remain high next year,” she said.

With regards to the future, Berry recommended that investors pay closer attention to supply disruptions in Chile and Indonesia rather than banking on an early payoff from EVs.

“… 2020 may be a better year for copper, but I think a higher copper price really depends upon supply disruptions in Chile or Indonesia coupled with the inexorable increased demand from electrification over the long term,” he said. “I can see the market tightening over the longer term should the current economic expansion continue, coupled with increased demand from the electrification theme, but this is not an imminent turn.”

In FocusEconomics’ October forecast report, analysts predict that copper prices are likely to remain below US$6,000 as global production lowers and geopolitical tensions rise. Its panel of experts projects an average price of US$5,890 in Q4 2019.

Bain is forecasting a similar number, projecting a year-end price of US$5,800.