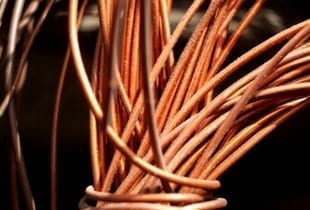 Copper demand for electric vehicles and buses could rise to 1.74 million tonnes in the next decade, a new study says.

Copper demand from the electric vehicle (EV) sector could rise by as much as nine times in the next decade, says a study prepared for the International Copper Association (ICA) by IDTechEx.
“Demand for electric vehicles is forecast to increase significantly over the next ten years as technology improves, the price gap with petrol cars is closed and more electric chargers are deployed,” IDTechEx Senior Technology Analyst Franco Gonzalez says in the report.
In total, the consultancy expects 27 million electric or hybrid cars and buses to be on the road by 2027, up from 3 million this year. “Our research predicts this increase will raise copper demand for electric cars and buses from 185,000 tonnes in 2017 to 1.74 million tonnes in 2027,” Gonzalez adds.
That’s because while cars using internal combustion engines require up to 23 kilograms of copper each, a hybrid electric vehicle uses nearly double that amount, at 40 kilograms of copper. IDTechEx also found that a plug-in hybrid electric car uses 60 kilograms of copper and, depending on the size of its battery, an electric bus can use between 224 and 369 kilograms of copper.
Those numbers suggest that electric vehicles could account for about 6 percent of global copper demand in 10 years, up from less than 1 percent this year.

Chart via International Copper Association.
“Copper has the highest conductivity of any non-precious metal, and plays an important role in all energy production, but it is particularly important for future sustainable technology applications such as electric vehicles,” Colin Bennett, market analysis and outreach at the ICA, told Reuters.
“Copper increases the efficiency and reliability of these vehicles and is itself a sustainable material, as it is 100 percent recyclable without loss of properties,” he also said.
The report confirms what CEOs and experts have been predicting for the copper market the last few months. In May, Ivan Glasenberg, CEO of Glencore (LSE:GLEN), the world’s third-largest producer of copper, said the rise of EVs will not only significantly boost demand for lithium, but also other metals like copper.
Similarly, Jean-Sebastien Jacques, CEO of global mining group Rio Tinto (ASX:RIO,LSE:RIO,NYSE:RIO), another major copper producer, and BHP Billiton’s (ASX:BHP,LSE:BLT,NYSE:BHP) Huw McKay, vice president of market analysis and economics, have called for a big boost in copper demand from the EV sector.
Copper’s use in technology could grow even higher as energy-independent vehicles that use solar photovoltaic systems enter the market. These vehicles also require considerable quantities of the red metal to operate.
With all of that in mind, copper bulls should closely follow the electric car revolution, as it looks likely to become an important driver of copper demand in the near future.
Don’t forget to follow us @INN_Resource for real-time news updates!
Securities Disclosure: I, Priscila Barrera, hold no direct investment interest in any company mentioned in this article.