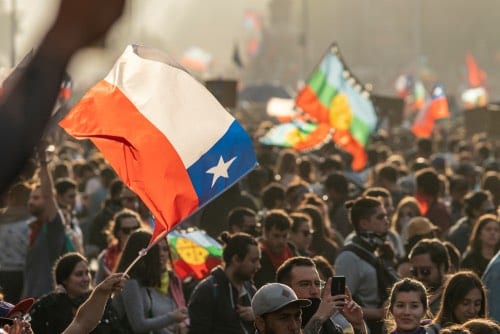 INN takes a look at recent comments by Robert Friedland, and asks whether Chile and the DRC can be compared as investment destinations.

At Mines and Money London in November, well-known and respected Canadian financier Robert Friedland, the founder and co-chairman of Ivanhoe Mines (TSX:IVN,OTCQX:IVPAF), made a whole lot of the top brass in the resources sector sit up in their chairs by unfavorably comparing the world’s premier copper jurisdiction — Chile — to the Democratic Republic of Congo (DRC).

Chile, which has been undergoing social unrest for months now off the back of a transit fare increase in mid-October, is, according to Friedland, a “terrible place to invest in mining” as a result.

The better alternative, he said, is the DRC, a “really great place” that just so happens to be the home jurisdiction of a rash of major copper projects owned by Ivanhoe Mines.

On the ground in the DRC

Charles Dumbrille, chief risk officer with In-D-Tel International, shared his thoughts on the situation in the DRC with the Investing News Network (INN), painting a picture that isn’t pretty.

Open conflict between government forces and dissidents is most pronounced in the eastern provinces of North and South Kivu and Ituru — while Ivanhoe Mines’ main project, Kamoa-Kakula is in Lualaba province to the south.

However, Dumbrille said that as a whole the Central African country is awash with risk, and “overall, the security situation is likely to remain unchanged.” In short, the risk level is fairly consistent.

“There are at least 70 armed groups currently operating in North and South Kivu provinces, as well as the three Kasai provinces, despite the heavy presence of the MONUSCO (United Nations Organization Stabilization Mission in the DRC) peacekeeping mission,” said Dumbrille.

He said that those groups, along with exiled rebel groups from neighboring Rwanda and Uganda, “continue to take control of weakly governed areas of the country.”

Returning to Friedland’s unflattering assessment of Chile, Dr. Remi Piet, senior director at Americas Market Intelligence, waved away the financier’s comments, saying that “we cannot honestly compare Chile and Congo” based on their governments, their level of development and their future prospects.

“Robert is playing his own cards, and trying to channel some investment for some of his mining operations in Congo,” said Piet in conversation with INN. “He’s seen in the past few years investors turn their back on Congo. The situation there is dreadful.”

All three major projects owned by Ivanhoe Mines in the DRC are being watched with keen interest by the copper market, but the situation on the ground in the DRC is generally regarded as being of a much higher risk to investors when compared to competing copper-rich jurisdictions like, say, Chile.

The DRC’s risk profile is always higher due to perception and the threat of child labor in mining areas, with artisanal mining rife within the country; that has prompted downstream users of materials from the DRC to go over their supply lines with fine-tooth combs. Artisanal mining poses its own conundrums for institutional operators.

The unrest happening in Chile doesn’t mean that the Latin American country is suddenly comparable to the raft of issues and dilemmas facing investors in the DRC, said Piet.

“In the case of mining specifically, most of the mining projects in Chile are in the north … far away from Santiago, where most of the unrest has taken place.”

The impact of the protests, said Piet, will be in whatever changes come about from a potential new constitution promised by the government.

For now, he said, “You cannot base your investments on headlines in newspapers on events that are not sustained in time.”

Paola Rojas, who is the managing director at Synergy Resource Capital, based in Australia, and is focused on Latin American projects, was also present at Mines and Money, and told INN that Friedland’s comments were made simply to get a reaction.

“In that sense, he was really successful because a lot of people reacted,” she said.

Rojas said she believes there is no true comparison between the two countries, saying that Friedland’s argument that Chile is doomed as a copper jurisdiction is vastly overblowing the severity of the situation.

“I think that things are going to be a little tough for a few more months,” she said. “We don’t know how long, but eventually they’re going to go back to normal.”

Similar to Piet, Rojas said she believes Friedland was just “using the moment” to spruik his own projects.

“It was used as a tool, and it worked — if he didn’t make those comments we wouldn’t be talking about it,” she said.

“Honestly … (Friedland’s comments were) something that people laughed at … there’s no comparison. (Chile is) a country that has established structures, established a large number of operating mines, a very strong mining sector from majors to small operations — everything in between, from very large international companies to family-owned firms that sell their production to ENAMI and all the local aggregates,” Rojas explained.

She concluded that while the DRC is indeed progressing in the development of its resources industry, and is better than it used to be, “they do need to do a lot of work.”

INN also reached out to analysts at London-based global risk consultancy Maplecroft for their thoughts on comparing the DRC and Chile.

Maplecroft’s head of Africa research, Indigo Ellis, and senior Latin America analyst, Mariano Machado, said that while the DRC and Chile are similar in that they boast large copper reserves and well-established mining industries, and are both seeing recent unrest, “the similarities end there.”

For the similarities, Ellis and Machado said that both the DRC and Chile are considered to be high risk in Maplecroft’s civil unrest index for Q4 2019, but overall Chile has much lower risk than the DRC.

Ellis said that given that the unrest in the DRC tends to be urban, individual mining sites are rarely impacted. The issue in the DRC, as many analysts have noted, is non-institutional mining.

“The more salient security risk for industrial copper mining in the DRC is the incursion of artisanal miners onto sites, and the potential complicity in human rights abuses of (mine police).”

Ellis added that given the interconnectedness of politics and mining in the DRC, “association with corruption is a primary risk for companies operating there.”

Machado painted a different picture for Chile, saying that the situation is far more complex right now. He described the ongoing civil unrest as the result of “long-pent-up public anger over a multitude of issues relating to the cost of living, education, healthcare and pensions, to name a few.”

Machado said that President Sebastian Pinera has a rocky road to travel in appeasing protesters and maintaining Chile’s economic prosperity.

“In agreeing to a process for a new constitution to address these matters, the conservative president will be obliged to negotiate not only with the center-left and radical left-wing opposition, but with a broad range of actors drawn from civil society, the trade union movement, the Catholic Church hierarchy, the military and the powerful private business sector, among others.”

That said, however, Machado pointed out that Chile’s overall regulatory framework for the resources industry is “one of the most developed, transparent and predictable in Latin America.”

The area where the two countries diverge the most dramatically is resource nationalism, said Ellis and Machado, noting that while Chile is regarded as low risk on Maplecroft’s resource nationalism index, the DRC is extremely risky, largely due to the state’s unreliability as a resource development partner.

“State miner Gecamines under Albert Yuma continues to play a detracting role in the sector and enables government interventionism,” said Ellis. Gecamines is in a joint venture with Ivanhoe Mines at Kipushi.

Machado said that while the government in Chile is obliged to follow through with its promises about a new constitution — unless it wants more protests — there is consensus among the political classes that the mining sector is critical for Chile’s growth.

“As such, we are confident that any changes to the overall mining regulatory framework in support of the broader constitutional restructuring will not be resource nationalism in ambition, but rather will look to ensure a sustainable and socially and environmentally responsible sector for the long term.”

For now, the protests in Chile have continued from mid-October through to mid-December, with the United Nations poking around trying to assess the situation on the ground.

Analytical firms have been reporting that Chile’s economic outlook is rocky for the time being off the back of the protests and ongoing disruptions, while its central bank has been quick to sound the alarm.

Even so, the country is regarded as Latin America’s most successful economy, having skilfully tended to its resources industry to become the world’s premier copper jurisdiction — something that Rojas, Piet and Machado seem to think is unlikely to change.

For the DRC’s part, it is indeed on the up — but it started from a very low base and continues to see unrest both within its borders and across them on an ongoing basis, compared with what most analysts consider a flash in the pan in Chile.

Piet said that Chile still represents a good return on investment, even with the disruptions of late 2019, adding “in the case of Africa there is also very interesting jurisdictions and very secure jurisdictions, but Congo is definitely not one of them.”