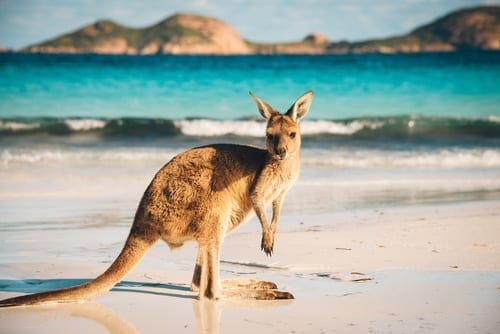 Interested in investing in lithium in Australia? Here’s a brief overview of the basic facts investors should know about the market.

After reaching the top spot as the world’s largest lithium producer in 2018, many investors are wondering if investing in lithium in Australia is a good option.

Without a doubt, the energy revolution is here to stay, with forecasts for electric vehicle (EV) sales increasing every day. As a result, demand for lithium, a key element in the lithium-ion batteries used to power electric cars, is expected to triple by 2025 — reaching about 1 million tonnes in size.

For investors interested in getting into the space, here’s a brief overview of the basic facts to know about investing in lithium in Australia.

Lithium is found globally in hard-rock deposits, evaporated brines and clay deposits. Australia is known for its hard-rock, pegmatite-hosted lithium resources, which are largely located in Western Australia.

Hard-rock ore containing lithium is extracted at open-pit or underground mines using conventional mining techniques. The ore is then processed and concentrated using a variety of methods prior to direct use or further processing into lithium compounds.

The country hosts the Greenbushes lithium asset, which is operated by Talison Lithium, a subsidiary jointly owned by miners Tianqi Lithium (SZSE:002466) and Albemarle (NYSE:ALB). Greenbushes is the longest continuously operating mining area in Western Australia, having operated for over 25 years.

Other operations in the country are the Mount Cattlin, Early Grey, Mount Marion and Bald Hill deposits, as well as other deposits with significant lithium resources.

In terms of reserves, Australia also holds over 2.7 million tonnes of identified lithium reserves, according to the US Geological Survey, which puts it just behind Chile. It is worth noting that most of the country’s lithium supply is exported to China as spodumene.

Despite a strong future outlook, 2019 has been a particularly tough year for lithium producers in Australia. Many factors have impacted the sector, including global trade tensions, a downward trend in prices and the fact that China, the top consumer of Australia’s spodumene for processing, has implemented EV subsidy changes.

As a result, investor sentiment has been negative, with stock prices declining for the past several months.

However, many analysts and market participants agree that the long-term fundamentals for lithium remain strong, with the EV revolution leading the way.

Benchmark Mineral Intelligence forecasts that lithium demand will reach 2.2 million tonnes by 2030, driven by growing EV adoption through the next decade.

Investing in lithium in Australia: Stocks on the ASX

Despite the current negative sentiment in the space, now might still be a good opportunity to look into investing in lithium in Australia. In fact, investors interested in lithium stocks should keep an eye on companies listed on the Australian Securities Exchange (ASX).

The Sydney-based stock exchange, which has a total market capitalization of about AU$2 trillion, was among the top five exchanges globally in terms of new listings last year  — 132 companies were listed during the 12 month period.

When looking at investing in lithium in Australia, companies listed on the ASX are a good place to start learning about players in the space. Here’s a quick look at the five top lithium stocks on the ASX by market cap. Data for this list was gathered using TradingView on October 28, 2019.

The Mount Marion lithium project, which is located in Kalgoorlie, Western Australia, is jointly owned by mining companies Mineral Resources and top lithium producer Ganfeng Lithium (OTC Pink:GNENF,SZSE:002460). The asset was initially expected to produce 206,000 tonnes of spodumene concentrate per year, but a current upgrade project is underway to increase production to 450,000 tonnes of all-in 6 percent spodumene concentrate per year.

Pilbara Minerals (ASX:PLS,OTC Pink:PILBF): Pilbara Minerals owns 100 percent of the world-class Pilgangoora lithium-tantalum project, which the company says is one of the biggest new lithium ore (spodumene) deposits in the world, with a globally significant hard-rock spodumene resource.

Orocobre (ASX:ORE,OTC Pink:OROCF): Orocobre is building a substantial Argentina-based industrial chemicals and minerals company through the construction and operation of its portfolio of lithium brine, potash and boron projects and facilities.

Orocobre, in partnership with Toyota Tsusho (TSE:8015), has built the Olaroz lithium-producing facility in Northern Argentina; it is the world’s first commercial lithium brine operation built in about 20 years. The company’s recently announced Stage 2 Olaroz expansion will add 25,000 tonnes per year of lithium carbonate production capacity to reach 42,500 tonnes per year (at full production and capacity).