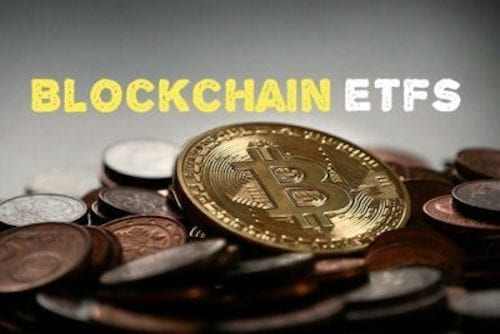 Investing in the blockchain industry is a relatively new phenomenon. Here’s a look at how to get started on investing in blockchain ETFs.

Cryptocurrency investors have experienced a real rollercoaster over the last few years, so why should you consider investing in blockchain exchange-traded funds (ETFs)?

The likes of bitcoin, ethereum and ripple have all reached incredible highs and then crashed, and investors have seen big gains and big losses (and then gains again). The cryptocurrency space remains volatile but exciting, and many are interested in how to enter and make money in this developing sector.

However, depending on how you look at it, perhaps an even bigger story is blockchain, the technology behind cryptocurrencies. Blockchain is the mechanism by which digital currencies are “mined” into existence, and it has become a popular investment in its own right for savvy investors.

Case in point — a range of blockchain technology stocks have emerged, creating a wider array of blockchain companies in the market. Large companies like Facebook (NASDAQ:FB), IBM (NYSE:IBM), Microsoft (NASDAQ:MSFT) and Toyota (NYSE:TM) have invested in blockchain. These corporations see the potential for blockchain to play a role in driverless vehicles, food safety and fintech.

For those newer to the blockchain investment space, deciding on a specific company to invest in may seem overwhelming, especially with the current uncertainty and price movements in the market.

That’s where ETFs come in. In simple terms, ETFs are marketable securities that track an index, a commodity, bonds or a basket of assets like an index fund. ETFs trade like a stock, and each ETF owns its underlying assets, dividing them up into shares that are available to investors.

While blockchain investing is new compared to most other industries, more and more investment data and opportunities are opening up in this space. Below is a look at the top five blockchain ETFs by total assets, as per information on ETF.com as of April 24, 2020.

Bear in mind that none of these ETFs are pure-play blockchain funds — all of them have other technology holdings and are not solely focused on blockchain companies.

First on our list of blockchain ETFs is the Amplify Transformational Data Sharing ETF. It launched in January 2018 and has had its share of ups and downs.

Amplify is an actively managed blockchain ETF, which makes it stand out against the other ETFs on this list. It has 55 holdings with an expense ratio of 0.9 percent. The ETF’s top holdings include GMO Internet (TSE:9449), Digital Garage (TSE:4819) and Square (NYSE:SQ).

The Reality Shares NASDAQ NexGen Economy ETF launched in January 2018. The ETF’s holdings are principally focused on companies that are involved in the research, development and application of blockchain technology.

This blockchain ETF has 64 holdings with an expense ratio of 0.68 percent. Overstock.com (NASDAQ:OSTK), IBM and SAP (NYSE:SAP) are among its top holdings.

The First Trust Indxx Innovative Transaction & Process ETF also launched in January 2018; it is a passive index fund. First Trust made this choice because it does not believe that anyone is currently adequately qualified to lead in the blockchain space given that it is such a new industry.

First Trust has two types of companies it selects from: blockchain users and blockchain developers. These include companies like IBM and Microsoft.

The fund consists of 99 holdings, which include Advanced Micro Devices (NASDAQ:AMD), NVIDIA (NASDAQ:NVDA) and Intel (NASDAQ:INTC). It has an expense ratio of 0.65 percent.

The majority of its holdings fall into the “digitization of finance” segment, while just over 15 percent of its holdings are focused on the blockchain industry. The ETF’s top three holdings are Mastercard (NYSE:MA), Visa (NYSE:V) and Square. This ETF has 120 holdings with an expense ratio of 0.5 percent.

In total, the fund has 42 holdings and its expense ratio is 0.95 percent. Its top three holdings are Amazon (NASDAQ:AMZN), NVIDIA and BP (LSE:BP).

One response to “Investing in Blockchain ETFs”