Precious metals prices returned from Easter Break with a bang. Despite the dollar remaining in the green Wednesday, silver took direction from the industrial side of the market and, like gold, rose along with platinum, palladium and copper prices. 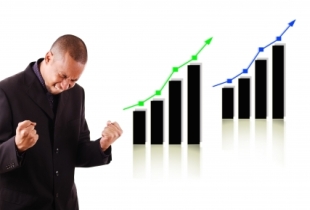 Precious metals prices returned from Easter Break with a bang. Both silver and gold are on a tear, hitting highs not seen since January.

On Monday, positive economic sentiments and a weaker dollar led silver prices to close up over $18 an ounce in New York, following similar trends in gold and platinum.

Silver prices took a few steps backward Tuesday, closing at $17.90 an ounce, as the dollar recovered slightly on less than inspiring economic data out of the euro zone.

Despite the dollar remaining in the green Wednesday, silver took direction from the industrial side of the market and, like gold, rose along with platinum, palladium and copper prices. Silver reached a nearly three-month high of $18.27 an ounce before closing at $18.16.

At this level, analysts believe the white metal may be able to take another run at the $18.90 an ounce high it reached back in January of this year; especially if it can maintain the $18.10 level.

Silver’s strength lies in its dual nature as both its precious and industrial metal roles are benefitting from market trends this week.

Gold continues to give silver a boost as it rides a return to risk-appetite on the Fed’s promise to keep interest rates at record lows. The yellow metal has risen nearly $50 an ounce on the Comex since last Tuesday and has reached a new all-time record against the euro. Investors are running to gold on deepening debt worries out of the euro zone. The markets seem apprehensive about the rescue plan for Greece’s financial troubles, especially with Greek bonds taking a hit from news the nation aims to forego IMF help, and this is pushing some into the safe-haven arms of gold.

Silver prices are also taking a cue from the industrial sector as platinum, palladium and copper post gains on renewed confidence in economic growth, particularly from North American and Asian markets.

Platinum reached its highest level since August 2008 at $1,726.75 an ounce and palladium rose to a 25-month high of $508.50 an ounce this week. Copper also grew stronger on positive economic sentiment, rising to its highest level in 20 months to over $8,000 a tonne.

Industrial demand for silver will continue to support prices in 2010 and beyond, say analysts. Although, we should expect recovery in demand to be slow going until after 2011 with full recovery not expected by the most pessimistic until 2014.

Even so, there is still hope for those looking to see silver shoot over $20 an ounce this year or next, especially on a potential surge in demand out of the electronic sector next year.

March production reached a monthly record high of 546,738 silver ounces and 9,225 gold ounces at Palmarejo, with first quarter silver production up 25 percent over the fourth quarter of 2009. The company says the operation is still set to reach a production target of 7.9 million ounces of silver and 109,000 ounces of gold for this year.

At San Bartolome, March production reached the highest monthly level in five months, up 46 percent over the previous month to 451,746 silver ounces. Mid-month, the Idaho-based company had started mining the higher-grade Huacajchi deposit, which helped improve production levels. For this year, the operation is expected to produce 7 million ounces of silver.

Once production begins at Kensingtion, Coeur expects the operation to put out about 50,000 ounces of gold for the second half of 2010.

Adrian Day: The One Thing Central Banks Are Good At
Will Trump Bring Back the Gold Standard?
VIDEO — Brien Lundin: Gold is Rallying — Buy Juniors While You Can
Gold Climbs After Fed Officially Pauses Interest Rate Hikes