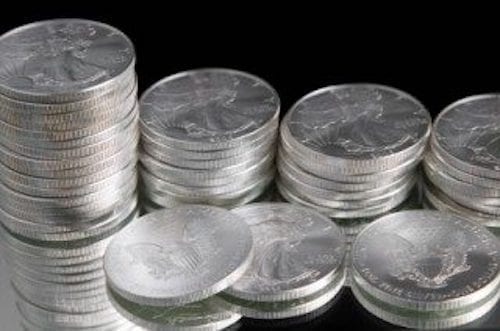 Silver claimed its biggest increase in 11 weeks. Backed by technical trading and a weaker US dollar, the white metal was able to climb almost 3 percent.

The silver price rose over 2 percent on Wednesday (April 18) afternoon, reaching a 2.5-month high thanks to technical trading. A weaker US dollar also supported prices.

Kitco analyst Jim Wyckoff said gold and silver are “tilted in favor of the bulls, which is inspiring technically-based buying interest at mid-week.”

He added, “[t]he ability of gold and silver to post price gains today, amid little risk aversion in the marketplace, is impressive.”

Also adding to silver’s price increase was its safe-haven appeal during the current political volatility.

Trump stated, “while Japan and South Korea would like us to go back into TPP, I don’t like the deal for the United States.”

“Too many contingencies and no way to get out if it doesn’t work. Bilateral deals are far more efficient, profitable and better for OUR workers. Look how bad WTO is to US,” he added.

Comments like these tend to leave investors clutching to safe havens such as precious metals.

Meanwhile, the US dollar fell to a near three-week low, boosting silver demand and supporting prices. A softer greenback makes commodities priced in dollars cheaper for investors using other currencies.

Johann Wiebe, lead analyst for Thomson Reuters’ GFMS team, told the Investing News Network last week that silver will most likely outperform the yellow metal in 2018 “purely based on the ratio argument.”

“[If] you look at the ratio it is at 82, and every time it pops above 80 … it reverses back because it is simply too expensive versus gold. So in that sense, yes, I support that argument [that] silver will upsell gold,” he added.