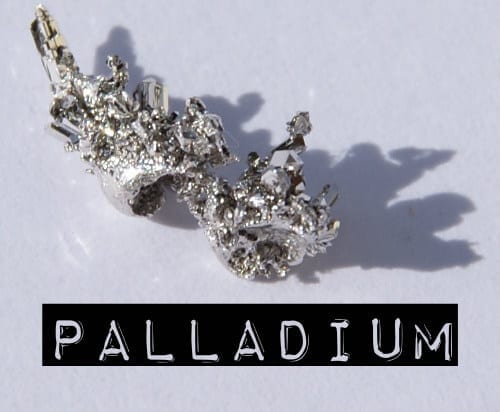 These are 2017’s top countries for palladium and platinum production, as per the latest data from the US Geological Survey.

Platinum-group metals (PGMs) include platinum, palladium, rhodium and other metals, all of which are prized for their durability, resistance to corrosion and excellent catalytic properties.

Today, the automotive industry is the world’s largest consumer of these metals, which among other things are used in catalytic converters for vehicle exhaust systems.

Car production is seen climbing in the coming years, particularly in developing markets, and that is expected to ensure healthy demand for PGMs. In fact, a supply deficit is predicted for this year.

But where do platinum and palladium come from? The list of the world’s top palladium- and platinum-mining countries is a short one — most PGMs come from South Africa and Russia, though there are a few other countries that produce the metals. Below is a list of the five top producers in 2017, as per the latest data from the US Geological Survey.

South Africa is the world’s top platinum-mining country and a major producer of palladium. It holds the largest-known reserves of PGMs globally at 63 million kilograms, and currently extracts a whopping 75 percent of the planet’s platinum.

The World Platinum Investment Council notes that South African platinum production was up by 20 percent in 2017 compared with the 2016 forecast as a result of greater efficiency.

However, production fluctuations by the world’s top platinum-producing country have been a common trend over the years. The nation is expected to experience reduced platinum output in 2018 as a result of mine closures in 2017. This year there has also been some concern that a massive drought that rocked the country in Q1 will affect supply; however, those worries have largely been dismissed.

Despite being the world’s second-biggest platinum-mining country, Russia’s annual production trails behind South Africa’s by a large margin. That said, Russia produced the largest amount of palladium last year, increasing its output from 79,000 kilograms in 2016 to 81,000 kilograms in 2017.

Russia-focused Norilsk Nickel (MCX:GMKN) is the world’s largest palladium producer, and it has created a fund to develop relations with holders of existing metal stockpiles. Earlier this year, it released its 2017 full-year production report, citing a 6-percent increase in palladium output year-over-year, amounting to 2.78 million ounces, as well as a 4-percent increase in platinum production, reaching 670,000 ounces.

In 2013, Obert Mpofu, then Zimbabwe’s mines minister, introduced new royalty requirements on unrefined PGMs being sent outside the country. These royalties were designed to encourage in-country processing of PGMs. Since then, the resignation of Robert Mugabe and the appointment of a new president, Emmerson Mnangagwa, has spurred on a great deal of interest from the mining community.

Apparently seeking to boost the economy, the president has “partially rolled back a law requiring mining companies to be locally owned.” While some say it will take longer to rebuild confidence and trust, and for major producers to return, others have already signed up to invest with the government, claiming $6 billion in mining commitments thus far.

Zimplats (ASX:ZIM) is currently the biggest platinum miner in the country. It is 87-percent owned by South Africa’s Impala Platinum Holdings (JSE:IMP), and owns a total of 48,535 hectares in mining claims.

North American Palladium (TSX:PDL) is one of only two primary palladium producers in the world. Its flagship mine is Lac des Iles, located in Ontario; it has been in production since 1993. In Q3 of this year, the company produced 56,862 ounces of payable palladium, higher than the 53,118 ounces it produced in the same quarter last year. Overall production of payable palladium in 2017 came to 201,592 ounces, according to the company’s annual report.

Stillwater Mining Company was the only producer of PGMs in the US until it was acquired by South African mining company Sibanye Gold in May 2017. The $2.2-billion deal allowed Sibanye to expand its operations to the US and reduce its dependence on aging mines in South Africa. The combined company is called Sibanye-Stillwater (NYSE:SBGL).

The firm now owns Stillwater’s East Boulder and Stillwater mines. Together, these mines were responsible for 376,356 ounces of 2E PGMs in 2017. The company also maintains a smelter, refinery and laboratory in Montana and recovers PGMs from spent catalyst material.

Which palladium- and platinum-mining countries do you want to learn more about? Let us know in the comments below.

22 responses to “5 Top Countries for Palladium and Platinum Production”