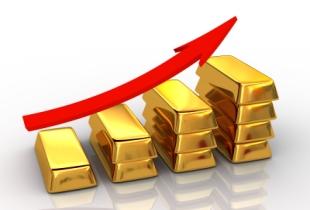 Many a wide-eyed gold bug caught a glimpse of their favorite metal jumping over the psychologically (and technically) important $1200 an ounce level Wednesday morning. I say a “glimpse” because those who blinked may have missed it.

But the blip still managed to register on the radar screen long enough to get every gold enthusiast hot and bothered about a possible return to the highs enjoyed earlier in the year, if not a jump into the stratosphere.

After a nearly 5 percent price loss last month, the gold market was understandably hungry for some good news. And this week offered plenty of nibbles large enough to feed double digit gains, with gold rising 2.2 percent in the five prior sessions. Wednesday’s gains put the yellow metal on track for its longest advance in nearly nine months.

Two of the most bullish factors at play in the gold market are the expectation the US Fed Reserve may lean on more inflation-stoking quantitative easing measures, and news that China is seeking to expand its gold market.

Earlier in the week, the Wall Street Journal, without naming sources, suggested the Fed was set to use the cash it will receive from its matured mortgage-bond holdings to purchase new mortgage or Treasury bonds. The report sparked fresh inflation fears, and sent the dollar down, which served gold prices well.

“The more debt the Fed buys, the lower interest rates will be and the more money there will be in circulation,” noted The Street’s Alix Steel. “Already the yield on the 10-year Treasury note, a benchmark, is less than 2.91%. One fear is that this move will lead to a devalued dollar, which hit an eight-month low against the yen on Tuesday, and a lack of confidence in the U.S. economy.”

The concern is the Fed will resort to such measures in the face of sure signs economic recovery has stalled. Many are holding their breath awaiting Friday’s unemployment numbers, which are expected to be rather week.

The Peoples Bank of China announced this week it will allow more commercial banks to import and export gold as well as to participate in trading at the Shanghai Gold Exchange, which the market viewed as an indicator of rising Chinese demand.

“Suggestions from the PBOC that they would develop a gold loan market and indications that they have also decided to expand their physical gold market seems to give gold fresh credence as a financial instrument inside China,” said Jaime Greenough, futures representative at Global Securities, in a note.

“Behind India, China is the second-largest physical consumer, therefore any step to integrate, liberalize, and expand this market should, in time, foster a rising appetite for gold,” UBS analyst Edel Tully commented.

It’s safe to say that in no other market do the Bears and the Bulls butt heads as often as in the gold market, where interpretations of the events shaping prices vary widely from bare bones and boring technical analysis to the stuff of international spy novels dripping with dark cabals and wild conspiracy theories. So, it should be of no surprise that price forecasts from the market’s analysts can vary in ranges wider than the Grand Canyon.

London-based commodity brokerage firm Natixis believes gold’s supply/demand fundamentals are too poor to justify current price levels let alone much higher advances. In fact, it sees price levels dropping to around $1050 an ounce in the fourth quarter with further drops to as low as $950 an ounce into 2011 with highs of $1150 an ounce next year. Those with a more bearish take view fears over a world-wide financial armageddon abating as euro zone debt issues cool, taking away much of the impetus for the precious metal’s gains over the past year and to record highs in June.

Obviously, the analysts at Natixis aren’t privy to the knowledge held by Mr. Embry at Sprott Asset Management.

The firm’s chief investment strategist, John Embry, told Mineweb’s Gold Weekly podcast listeners Wednesday that if gold’s “not between $1,500 and $2,000 in the next 18 months, I’m dead wrong.”

Embry’s price forecast is based on a lack of optimism when it comes to any hope for a “sustainable economic recovery in the western world” and the belief that governments such as the US will resort to “throwing so much money at this, it’s going to make your head spin,” just to keep a lid on things.

China’s latest move to expand its gold market has also added to Embry’s extremely bullish price predictions. “The Chinese were just out today [Tuesday] again with more suggestion that the public buy more and what have you, and basically physical gold is moving from the west to the east and when that process is largely finished, then the price is going to go nuts because gold always goes where wealth is being created and it’s most assuredly being created in the eastern world.”

Other analysts, while not so confident as Mr. Embry, are still bullish on gold. Matt Zeman, a metals trader at Chicago-based LaSalle Futures Group believes gold may hit $1,350 an ounce in the next few months.

However, Peter Hillyard, head of metal sales at Australia and New Zealand Banking Group, doesn’t view this week’s mini rally as the “springboard to $1,300 an ounce.” He expects further pullback this summer before a rally in the fall. “I’m one of those that believes that by year-end we will see gold with a $1,300-handle … that doesn’t mean that it can’t go back to $1,190 or $1,185 on its way there.”

Standard Bank analyst Walter de Wet sees gold moving to highs of $1300 an ounce in the next 6 months given the high probability that the Fed will keep interest rates flat into the second half of next year.

For now, most analysts agree that with bargain buying and upcoming seasonal demand in India providing a floor, gold prices will continue to find support in the $1170 to $1180 an ounce range. While reports indicated that Indian gold imports were lower for June 2010 than for June 2009, causing some to worry high prices will further dampen demand from the world’s largest gold consumer, other analysts see buying interest from India stabilizing.

In the short-term, the precious metal is expected to face resistance in the $1,189 and $1,200 an ounce range. A close above $1225 an ounce is needed to really provide gold the momentum to rally to the $1300 an ounce level many analysts are calling for.