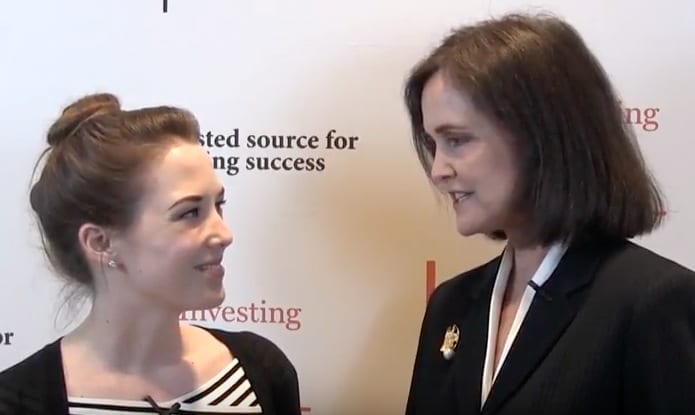 Trump transition team economist Judy Shelton shares her thoughts on how he’s doing, who the next Fed chair may be and why the gold standard is important.

Economist Judy Shelton has an impressive background, but most recently she’s received attention for serving on US President Donald Trump’s transition team. At last week’s New Orleans Investment Conference, she shared her thoughts on how he’s doing so far.
“I’m very much in favor of the pro-growth economic agenda that he is trying to enact, I think he’s making some progress,” she said. “I like the regulatory part … [and] I like the tax reform program — I think we’re going to end up making it a much more attractive environment for corporations, and I think those benefits end up helping the people who work in those corporations.”
Shelton also spoke about who Trump may choose as the new chair of the US Federal Reserve. He is expected to announce his decision on Thursday (November 2), and as the day approaches market watchers have been hotly debating who he will pick.
“I can see why he would be drawn to … continuing with Janet Yellen to reassure markets, or possibly Jay Powell, who is already on the board,” said Shelton. “[And] you have John Taylor, an excellent economist. He would like to impose discipline … to guide Federal Reserve policy decision making.” She also said the fact that gold standard advocate John Allison was interviewed shows Trump is open minded.
Shelton is in favor of the gold standard as well, and explained, “I think that money needs to be stable and provide the foundation for productive economic growth. When money is just a variable the financial markets toss around, or it’s part of a derivatives formula or it’s part of someone speculating on currencies, it’s not serving the private sector in the sense of providing that reliable unit of account.”
“Under a gold standard you did have that stability, and I think that’s what’s missing. I like the idea of a gold standard — it could be used in a very cryptocurrency way. The point is do you have a unified money system so that when you talk about the international marketplace, everyone is playing on a level monetary playing field,” she said.
Watch the video above for more insight from Shelton on Trump, the next Fed chair and whether the gold standard will be used again in the future. The transcript for this interview will be added shortly.
Don’t forget to follow us @INN_Resource for real-time news updates!
Securities Disclosure: I, Charlotte McLeod, hold no direct investment interest in any company mentioned in this article.
Editorial Disclosure: The Investing News Network does not guarantee the accuracy or thoroughness of the information reported in the interviews it conducts. The opinions expressed in these interviews do not reflect the opinions of the Investing News Network and do not constitute investment advice. All readers are encouraged to perform their own due diligence.

One response to “VIDEO — Judy Shelton: Trump, the Next Fed Chair and the Gold Standard”