The gold price started the week on a tear as bargain hunters put the pedal to the metal on bullish comments from the US Fed chair. Good economic news, however, beggared the price, and by the end of the week gold was struggling again. 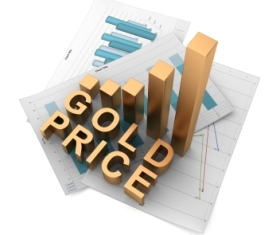 Gold this week was buffeted by winds coming from both Europe and the United States — with the end result being that most of its gains were wiped out and the price of the precious metal finished Thursday at almost the exact level as a week earlier.

The action started on Monday when bargain hunters — still seeing blood in the water from last week’s 20 percent price pullback due to signals from the US Fed about a possible end to quantitative easing — jumped into the bullion markets. A weaker dollar and the prospect of bad news coming out of Italian elections also helped gold. The gold price added more than $25 and came close to breaching the psychologically significant $1,600 level — rising over 1 percent to $1,593 per ounce.

Then it was Ben Bernanke’s turn to weigh in on quantitative easing — a term first coined in 2008 when the central bank began purchasing bonds in an effort to shore up the flagging US economy. Since that year the gold price has doubled on the inflationary implications of QE and its latest round, QE3 announced last year, involves the purchase of some $85 billion per month worth of US Treasuries and bonds.

On Tuesday the US Federal Reserve chairman tried to assuage concerns about QE ending, stating “In the current economic environment, the benefits of asset purchases […] are clear.” Bernanke indicated that QE could stay in place until 2014 and added that “monetary policy is providing important support to the recovery while keeping inflation close to the FOMC’s 2% objective.”

Those remarks were bullish for the gold price, which gained more than $30 to reach a high of $1,620.

The rally wasn’t to last, however, after positive economic news from the United States on Wednesday dampened the spirits of gold bugs and traders began hitting their sell buttons. Housing data turned out better than expected and that had investors thinking the Fed’s ultra-loose monetary policy could end sooner rather than later despite Bernanke’s comments to the contrary. Gold fell as much as $25 to touch a low of $1,591, erasing most of the gains made the day earlier.

Gold remained flat on Thursday with the US dollar hovering near a six-month high and little fresh safe-haven demand in the wake of the Italian election results. Kitco reported the head of the Organization for Economic Cooperation and Development as saying the gridlock that resulted from no clear winner emerging will not significantly impact the European debt crisis as was feared.

At the close of the trading session April COMEX gold was down $17.10 at $1,578.60/oz. Spot gold also dropped $17.20 to finish at $1,579.50. On a monthly basis gold futures declined for the fifth straight month; the last time that happened was in 1997. In another signs of gold’s current weakness, holdings in the SPDR Gold Trust (ARCA:GLD) — the world’s largest gold ETF — crashed through a six-month low on signs of an improving global economy, Reuters reported.

Waning investment demand for gold does not appear to be affecting the yellow metal’s appeal by central banks. Bloomberg reported that Russia and Kazakhstan expanded their gold reserves for the the fourth straight month in January. Russian holdings increased in January by 8.5 percent over 2012, while Kazakhstan purchased another 1.5 tons to add to that country’s 40 percent increase in gold reserves last year.

In China, gold mines continue to crank out bullion and cement the country’s position as the world’s number one gold producer. China’s Ministry of Information Technology reported that in 2012, China’s total gold production increased 11.66 percent to 403.1 metric tonnes.

The Las Vegas Review-Journal reported that Nevada, the world’s third-largest gold producer after China and Australia (2011 figures), could dodge the “gold production cliff” facing major miners after 2017. While Canada’s National Bank Financial has found that big gold companies have found too few large new deposits to sustain current production rates, the paper counters that Nevada could buck the trend:

“For one thing, miners here seem to be bucking the trend away from new deposits. More importantly, an international production slowdown could prop up gold prices, which would make additional exploration and output more feasible in the long run.”

Examples of new discoveries in Nevada include Newmont Mining’s (NYSE:NEM) Long Canyon project and Barrick Gold’s (NYSE:ABX,TSX:ABX) Goldrush mine, both of which have substantially increased their resource estimates.

Rio Tinto (LSE:RIO,NYSE:RIO) and Turquoise Hill Resources (NYSE:TRQ,TSX:TRQ) had a setback this week when the government of Mongolia revoked the licenses for a key section of their giant Oyu Tolgoi copper-gold complex. Rio and subsidiary Turquoise Hill own two-thirds of the project, with the Mongolian government controlling 34 percent. The companies have often clashed with Mongolia over costs, revenues and taxes, as the Central Asian nation seeks to ensure it maintains substantial benefits from the $6.6-billion mine that has been over a decade in the making. FT.com reported a person with knowledge of the matter as saying ”If an agreement is not reached either the mine will suspend operations or Rio will extend credit to the mine.”

Barrick Gold said last Friday it would try mediation to try ending protests at its Lagunas Norte mine in Peru centering around water supplies. Production at the mine, which yielded 763,000 ounces of gold in 2011, has not been affected by about 150 protesters blocking the road to the mine, according to Reuters.

Mineweb reported that Saudi Arabia’s largest gold miner, Ma’aden company, has granted a lucrative contract to build a gold processing plant for its Ad Duwayhi gold mine. The US$271 million design-build contract was awarded to Korean company Hanwha Engineering and Construction.

Timberline Resources (TSXV:TBR,NYSE:TLR,AMEX:TLR) increased the resource estimate at its Lookout Mountain Gold Project in Nevada. Gold ounces in the measured and indicated categories increased by 30 percent from 2012, and are now 78-percent greater than Timberline’s initial 2011 resource estimate, Timberline said in a statement.