The Federal Reserve once again didn’t do gold any favors this week. Spot gold was down on Thursday to $1,279.24 per ounce on more outflows from gold exchange-traded funds after the Fed stuck with its plan to reduce its monthly bond-buying program. 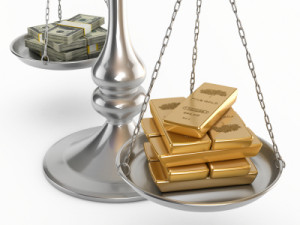 The Federal Reserve once again didn’t do gold any favors this week. Spot gold was down on Thursday to $1,279.24 per ounce on more outflows from gold exchange-traded funds (ETFs) after the Fed stuck with its plan to reduce its monthly bond-buying program. The yellow metal touched a one-week low of $1,277.09 earlier in the day.

The Fed’s decision to reduce its monthly bond purchases was reinforced by its view that the US economy is on the path to recovery. This week, US data showed that consumer spending was at its highest level in over four and a half years in March, while factory activity increased in April. Market watchers will be on the lookout for US nonfarm payrolls data, scheduled to be released on Friday.

The gold-backed SPRD Gold Trust ETF (ARCA:GLD) saw roughly 4.19 tons of outflows on Wednesday, marking its biggest drop in two weeks. That suggests investor confidence has not quite been restored when it comes to gold. ETF holdings have been on a decline for the past several weeks, with a drop of 30 tons over the last month and a half.

Earlier this week, when gold touched about $1,300 on continued tension between Russia and Ukraine, ETFs seemed like a good idea. Unfortunately, ETFs seem to be caught in the middle of a “tug of war” between the former Soviet nation and the US.

“Total holdings in exchange traded products backed by physical gold fell by 0.6 tons as investors in the yellow metal continue to seek protection from a potential escalation in Ukraine against the risk of further losses as the US economy continues to improve, thereby offering better investment opportunities elsewhere,” said Ole Hanson, head of commodity strategy at Saxo Bank.

US slipping from top spot

Despite the improving US economy, a report out of the World Bank suggests that China’s economic growth is rapidly gaining on that of the US, so much so that China could soon hold the top spot as world’s biggest economy.The US has held the top spot as world’s largest economy for more than a century, and could be surpassed by China as early as this year. Economists, as the Financial Times explains, had previous thought that China would only pull ahead of the US in 2019. The Bank also highlights that India has climbed up the ranks, taking the place of third-largest economy away from Japan.

This week, merger talks between Barrick Gold (TSX:ABX) and Newmont Mining (TSX:NMC) came to an end. As CTV News reported, both companies blamed each other earlier this week for the collapse of merger talks, which could have resulted in the a combination of the world’s largest gold producers. In what ended up being a war of words, Barrick’s chairman, Peter Munk, pointed to “cultural differences,” adding that Newmont is an extremely conservative and risk-averse company, which made negotiations frustrating.

On Wednesday’s annual shareholder meeting, Munk stepped down from his post after more than 30 years.

Vancouver gold miner Goldcorp (TSX:G) announced its Q1 earnings on May 1. They show a decline due to the lower gold price, despite the company’s increase in gold production.

On Thursday, Corvus Gold (TSX:KOR,OTCQX:CORVF) announced the results from the ongoing Phase 1 drill program at the North Bullfrog project in Nevada. Corvus notes assay results include the full intercept of hole NB-14-380, as well as four recently completed holes on the new West Vein zone. Highlights from the new West Vein zone include hole NB-14-384, which intersected 4.5 meters of 17 g/t gold and 140 g/t silver 50 meters along strike from NB-14-380. Meanwhile, hole NB-14-382 encountered 4.7 meters of 4.6 g/t gold and 0.5 meters of 181 g/t gold 25 meters down dip from NB-14-380.

Detour Gold (TSX:DGC) reported its first-quarter results on April 30. They indicate that Detour met expectations, producing 107,154 ounces of gold for the quarter. The company also saw revenues come in at $110 million from the sale of 84,560 ounces. In addition, Detour closed some equity financing for gross proceeds of C$173 million and repaid $40 million in debt.

Paramount Gold and Silver (TSX:PZG,NYSE:MKT:PZG) discovered a new set of structures to the south of the richly endowed Guazapares Megastructure on the San Miguel project in Mexico. Preliminary drilling has intersected sizable widths of high-grade precious metals.

Also this week, Klondex Mines (TSX:KDX) announced the results of its PEA for the Fire Creek project in Nevada. The assessment points to low all-in sustaining cash costs of $636 per ounce of gold and a $157.3-million after-tax cash flow.