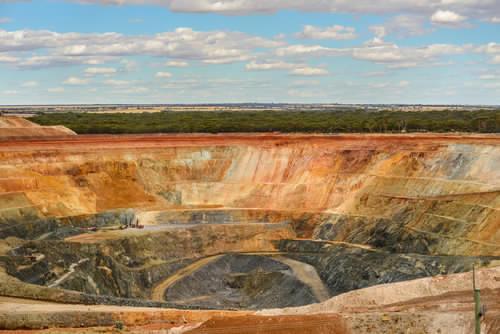 Interested in gold mines? We’ve rounded up a list of the top Australian gold mines flush with the yellow metal.

With Australia earning more accolades within the gold space, investors may want to find out more about gold mines in the country.

Currently the second-largest gold-producing country in the world, Australia is the home for top producers and gold mines.

Read on for a break down of the Australian gold market, as well as the largest gold mines that can be found throughout the area.

The region of Australia

As previously mentioned, Australia is currently the second-largest gold-producing country across the globe.

Gold production in the country reached a high of 310 million metric tons (Mt) in 2018, up from 300 million Mt the previous year. This year alone, Australia is expected to produce an estimated 10.7 million ounces, which is the equivalent of about AU$19.2 billion.

One of the more prolific gold mining areas in Australia is Western Australia.

Recent exploration activity in the Pilbara region of Western Australia has renewed interest and helped increase the country’s consistent gold output. While the Pilbara region is typically best known as one of the world’s largest producers of iron ore, the region is currently in the midst of increased gold exploration thanks to a major discovery in 2017 by Novo Resources (TSXV:NVO,OTCQX:NSRPF) and Artemis Resources (ASX:ARV,OTCQB:ARTTF).

In fact, gold mining is the fourth largest commodity sector in Western Australia, behind iron ore, crude oil and liquified natural gas, with a value of approximately AU$10 billion.

The Fraser Institute also named Western Australia one of the best mining jurisdictions in the world, coming in second to Nevada. The area has attracted major miners like Rio Tinto (ASX:RIO,LSE:RIO,NYSE:RIO) and BHP (ASX:BHP,NYSE:BHP,LSE:BLT) to the region. Covering more than half a million square kilometres (km), Western Australia’s Pilbara is one of the most resource-rich regions in the state.

Western Australia itself represents close to 70 percent of the country’s total gold output and some geologists have compared the geology of the Pilbara Craton with South Africa’s Kaapvaal Craton and Witwatersrand Basin. Witwatersrand is home to the Earth’s largest known gold reserves and is responsible for over 40 percent of worldwide gold production. Both the Pilbara and Witwatersrand are similar in age and composition, sitting on top of the Archean granite-greenstone basement. The Pilbara area hosts numerous small mesothermal gold deposits containing conglomerate gold — mineralization known to hold large, high-grade gold nuggets.

Major mining companies like Kirkland Lake Gold (ASX:KLA,TSX:KL) have also invested in the region, committing C$56 million into Novo Resources. Kirkland Chairman Eric Sprott is a well-known resource investor who owns shares in Novo as well as several other companies throughout the Pilbara region.

What are the top Australian gold mines?

Below is a guided tour of the top 10 largest gold mines in Australia in terms of gold output, according to the most updated Aurum Analytics quarterly report on Australian & New Zealand gold operations.

Owned and operated by Newcrest (ASX:NCM,OTC Pink:NCMGF), Cadia is officially the biggest mine in Australia in terms of production. During the third quarter of 2019, the asset had an output of 171,730 ounces of gold.

The mine is made up of Cadia East underground panel cave mine and the Ridgeway underground mine, which produce gold doré from a gravity circuit and gold-rich copper concentrates from a flotation circuit. Cadia had a copper output of 91,000 Mt this year alone.

Newmont, now Newmont Goldcorp (TSX:NGT,NYSE:NEM), became the sole owner of this open-pit mine in 2009, with the asset pouring its two millionth ounce of gold in 2012.

The mine is located 16 kilometres from Boddington, Australia, and has an annual gold production of 709,000 attributable ounces. During the third quarter of this year, the asset produced 167,000 ounces of the yellow metal.

In addition to gold, the mine also produces copper, and at the end of 2018, it provided an output of 77 million attributable pounds of the base metal.

The mine currently employs over 2,000 employees and contractors.

Fosterville is a high-grade, low-cost underground gold mine located in the state of Victoria, Australia. The Fosterville mine features growing gold production at increasingly high grades, as well as extensive in-mine and district scale exploration potential.

The mine has been operational since 1989, with a lifetime production of over 16 million ounces of gold. Additionally, in terms of scale, it is Australia’s largest mine and its pits encompass more than 5 square kilometres.

Tropicana is co-owned by AngloGold Ashanti (ASX:AGG,NYSE:AU,OTC Pink:AULGF), which owns 70 percent, and Independence Group (ASX:IGO), which owns the remaining 30 percent.

As of the beginning of this year, it was reported that the asset has produced 2.5 million ounces of gold.

The mine spans 3,600 square kilometres, stretching over close to 160 kilometres in strike length along the Yilgarn Craton and Fraser Range mobile belt collision zone. The regional geology is dominated by granitoid rocks; it is a rare example of a large gold deposit within high grade metamorphic rocks that have undergone widespread recrystallisation and melting.

Kalgoorlie is a super pit gold mine, as well as a joint venture asset, as it is owned by both Newmont Goldcorp and Barrick Gold (TSX:ABX,NYSE:GOLD).

The mine is referred to as a super pit because it has produced more than 50 million ounces of gold in the last 30 years.

The asset is located in the legendary Golden Mile, which was once reputed to be the richest square mile on earth. When fully developed, Kalgoorlie will be 3.6 kilometres long, 1.6 kilometres wide and up to 650 metres deep.

Tanami has been fully owned and operated by Newmont since 2002, and it is located in the remote Tanami Desert of Australia. Additionally, both the mine and the plant are located on Aboriginal freehold land that is owned by the Warlpiri people and managed on their behalf by the Central Desert Aboriginal Lands Trust.

Tanami is a fly-in, fly-out operation in one of Australia’s most remote locations. The asset is 270 kilometres away from its closest neighbours, the remote Aboriginal community of Yuendumu. By the year 2012, Tanami had added US$466 million of value to the Australian economy.

Jundee is located in the increasingly sought after Western Australia region and is owned by Northern Star (ASX:NST,OTC Pink:NESRF) after the miner purchased it from Newmont in 2014 for AU$82.5 million.

The project is well-known due to the fact that it solely uses underground mining and not the often utilized open pit mining. Jundee produces around 1.8 million Mt of ore per year, which yields 499,000 ounces of gold.

Most recently, the asset has yielded significant profits for Northern Star, with revenues of over AU$4 million during the first half of 2018 alone. The company is currently expanding the project following a significant discovery of high-grade gold ore at the mine’s Zodiac region. With a strong resource base of 1.4 million ounces of gold, Northern Star estimates the mine will continue production for at least another 10 years.

Another mine owned by Newcrest, Telfer is located in the eastern Pilbara and is one of the oldest in Australia. Between the years 1975 and 2000, the asset produced approximately 6 million ounces of gold until operations were suspended due to high operating costs.

Fortunately, production was able to restart in 2004 and the mine has since produced over 5 million ounces, producing 425,536 ounces in the 2018 financial year alone. The mine also produces copper, with an output 16,212 Mt in 2018.

In 2015, the company signed a land use agreement with the Martu people, which enabled work at the mine to continue in exchange for the Martu receiving AU$18 million over the course of five years with the addition of a further revenue-sharing agreement.

Cowal is fully owned by Evolution Mining (ASX:EVN,OTC Pink:CAHPF) and is the largest gold mine outside of Western Australia. The asset is located 350 kilometres west of Sydney, in New South Wales.

Most recently, Evolution was granted regulatory approval to increase the plant processing rate by 31 percent from 7.5 million Mt per annum to 9.8 million.

In one of Gold Fields’ latest quarterly reports, it was revealed that St. Ives produced 75.2 million ounces of the yellow metal between January and September of 2019.

How can you invest in Australian gold stocks?

Like all publicly listed stocks, gold companies issue shares that are available for investors to trade. When you purchase shares of a gold stock, you are essentially purchasing a stake in the company, making an investment with financial returns or losses from its profits.

There are two main ways that an investor can gold mining stocks. The first way is when market participants purchase through a major mining company. The other way of trading on the stock market is by investing in a gold mining stock through a junior miner (a small cap stock).

Although no gold stock investing is 100 percent foolproof, backing a successful mining company in the precious metals space can alleviate some of the stress of a down stock market when you keep in mind that if a company’s share price goes down, it becomes more affordable to purchase and investors can more than likely anticipate that it will rise again and turn a profit.

While gold stocks are affected by some of the same factors that shape and shift the price of precious metals, they keep some distance from a direct correlation because it is possible for a gold miner and its stocks to be in a sound financial situation even in a down market.