Quentin Yarie, Chief Executive Officer of Red Pine stated, “Our 2019 exploration results continue to successfully extend the Wawa Gold Project resource with gold intercepts in the Surluga Deposit, the Hornblende Shear Zone, and the Minto B Shear Zone. The new gold zones in the hanging wall and footwall of the Surluga Deposit indicate that new discoveries are still possible, and continue to be uncovered, near and beyond the footprint of the current resource. Also, results to date show that the resource can not only be expanded at depth, but also laterally. We now have evidence of the continuity of gold mineralization over a strike length of 1 kilometre in the Hornblende Shear Zone and 800 metres in the Minto B Shear Zone with both zones remaining open along strike and at depth.”

Highlights from the discovered gold zones in the Wawa Gold Corridor: 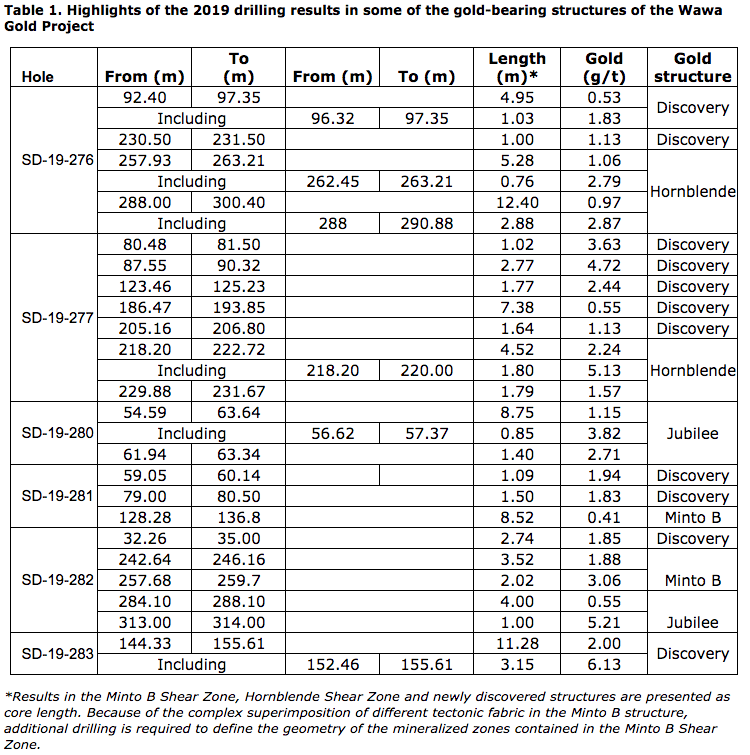 In the Cooper Shear Zone, diamond drilling proved that the structure extends at depth. Despite the observation of visible gold in some of the intercepts, drilling results did not replicate the high-grade mineralization encountered at surface with channel sampling. The Company believes that a very high nugget effect is responsible for the lack of grade continuity observed in the drill results of the Cooper Shear Zone. The high nugget effect would explain why some samples containing visible gold resulted in assay results that were below the gold detection threshold of the analytical method.

Over 95% of the contained ounces at both deposits are located between surface and 350 metres depth;
Both deposits remain open at depth.
Six additional gold-bearing structures have been identified on the property that combined, form the Wawa Gold Corridor, a structure that extends for more than 6 kilometres on the property. These gold-bearing structures include the Cooper, the Hornblende, the Grace mine, the Minto B, the Parkhill #4-Minto Lower, and the southern extension of the Jubilee Shear zones.

Red Pine’s future drilling programs will be focused on converting these exploration targets into Mineral Resources and proving their continuity at depth.

On-site Quality Assurance/Quality Control (“QA/QC”) Measures
Drill core samples were transported in security-sealed bags for analyses to Activation Laboratories Ltd. in Ancaster, Ontario. Individual samples are labeled, placed in plastic sample bags and sealed. Groups of samples are then placed into durable rice bags and then shipped. The remaining coarse reject portions of the samples remain in storage if further work or verification is needed.

Red Pine has implemented a quality-control program to comply with best practices in the sampling and analysis of drill core. As part of its QA/QC program, Red Pine inserts external gold standards (low to high grade) and blanks every 20 samples in addition to random standards, blanks, and duplicates.

Qualified Person
Quentin Yarie, P Geo. is the qualified person responsible for preparing, supervising and approving the scientific and technical content of this news release.

Red Pine Exploration Inc. is a gold and base-metals exploration company headquartered in Toronto, Ontario, Canada. The Company’s common shares trade on the TSX Venture Exchange under the symbol “RPX”.

Red Pine has a 60% interest in the Wawa Gold Project with Citabar LP. holding the remaining 40% interest. Red Pine is the operating manager of the Project and is focused on expanding the existing gold resource on the property.

For more information about the Company visit www.redpineexp.com