: Dig Media recently conducted its Resources Investing News 2010 Survey to gauge the interests of its readers and gain insight into investors’ perception of the markets. Perhaps most telling was that nearly 69 percent of respondents said they believe the price of gold will reach $1500 before the end of 2010. 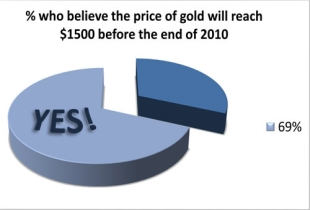 Dig Media recently conducted its Resources Investing News 2010 Survey to gauge the interests of its readers and gain insight into investors’ perception of the markets.

Perhaps most telling was that nearly 69 percent of respondents said they believe the price of gold will reach $1500 before the end of 2010. This bullish sentiment is most likely supported by the increasing flight-to-safety climate currently taking shape in Europe and North America as investors contemplate the likelihood of a slow economic recovery and the possibility of a double-dip recession.

It’s not surprising that such a high percentage of respondents would answer yes when many analysts this past month have been calling for $1500 gold this year or next, including commodities analysts at Citibank, Macquarie Securities, UBS AG and Fairfax IS plc.

Recently, Gold Investing News spoke with Mr. Wayne Atwell, Managing Director at Casimir Capital, LLP, former Morgan Stanley Managing Director and former VP of Metals and Mining Industries at Goldman Sachs. Mr. Atwell was kind enough to share his perspective on $1500 gold in 2010, one that is based on over forty-years of experience in the metals markets.

The threat (reality) of rising inflation plays a large role in directing Atwell’s short and long-term outlooks. While he does see inflation creating havoc in the markets and positively influencing gold, inflation won’t begin to be a factor in gold prices right away. The yellow metal, he cautions, will likely continue to remain range-bound throughout the remainder of 2010. “Whenever gold does make a new high, it seems like a lot of investors or speculators take profits to cover losses elsewhere or maybe reinvest in what they may think is a more attractive price in other commodities,” remarks Atwell. And this phenomenon is likely to repeat itself until the reality of rising inflation takes hold.

Atwell’s forecast of $1500 to $2000 an ounce gold within one to three years is based on his observation of the rising debt crisis in the US. “I don’t see any way out of this environment without a very serious bout of inflation,” worries Atwell. He points out that the interest expense on US debt is now at approximately $400 billion, according to the Budget Office, and in another four to five years that figure is expected to reach $900 billion. “That’s a result of two things,” explains Mr. Atwell. “Interest rates are going to go up and the debt level is going to go up.”

Acknowledging what many economists are trying to ignore, Atwell declares that the US hasn’t been in this bad a shape financially since the Depression and the Second World War. Atwell warns that rising inflation is on its way in the next year or two, which means gold “will continue to march higher, but at a modest pace, until a year or two from now when you have sort of a meltdown when people start to get very scared about what’s going on because the government doesn’t seem to be addressing the deficit area very well.”

Either way, gold prices are bound to do well over the next few years as the impact of the global economic crash of 2008 continue to take its toll.