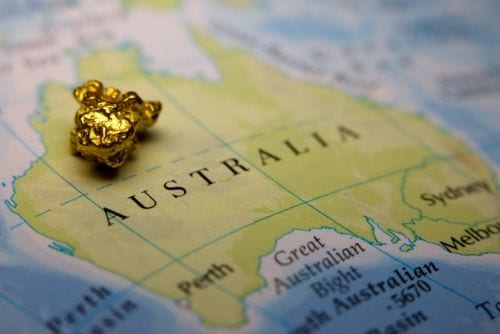 As the price of gold continues to climb, now may be the perfect time for investors to enter into the gold space.

In particular, market participants may want to turn their attention to investing in gold stocks on the Australian Stock Market (ASX), as Australia is currently the second largest gold producing country in the world and its western region is an increasingly sought out jurisdiction.

Read on for a break down of the Western Australian gold market, why and how to invest in gold stocks and some of the top ASX-listed gold stocks to buy.

The region of Western Australia

As previously mentioned, Australia is currently the second largest yellow metal producing country across the globe.

Gold production in the country reached a high of 310 tonnes in 2018, up from 300 MT the previous year. This year alone, Australia is expected to produce an estimated 10.7 million ounces, which is the equivalent of about US$19.2 billion.

“There are three countries that combine the rule of law with significant gold production: Canada, USA and Australia. Outside of these three, there’s not much gold, or there’s not much protection for individual investors and companies,” Kevin McElligott, managing director of Australia at Franco-Nevada (TSX:FNV,NYSE:FNV), told the Investing News Network (INN) via email.

“The difference for Australia is that gold is 12 percent of exports, versus 2 percent for Canada. So the gold producers are more important to the Australian economy, to maintain that high standard of living. There’s higher political and social support for gold mining here.”

One of the more prolific gold mining areas of Australia is Western Australia.

Recent exploration activity in the Pilbara region of Western Australia has renewed interest and helped increase the country’s consistent gold output. While the Pilbara region is typically best known as one of the world’s largest producers of iron ore, the region is currently in the midst of increased gold exploration thanks to a major discovery in 2017 by Novo Resources (TSXV:NVO) and Artemis Resources (ASX:ARV).

In fact, gold mining is the fourth largest commodity sector in Western Australia, behind iron ore, crude oil and liquified natural gas, with a value of approximately AU$10 billion.

The Fraser Institute named Western Australia one of the best mining jurisdictions in the world, coming in second to Nevada. The area has attracted major miners like Rio Tinto (ASX:RIO,LSE:RIO,NYSE:RIO) and BHP (ASX:BHP,NYSE:BHP,LSE:BLT) to the region. Covering more than half a million square kilometres, Western Australia’s Pilbara is one of the most resource-rich regions in the state.

Western Australia itself represents close to 70 percent of the country’s total gold output and some geologists have compared the geology of the Pilbara Craton with South Africa’s Kaapvaal Craton and Witwatersrand Basin. Witwatersrand is home to the Earth’s largest known gold reserves and is responsible for over 40 percent of worldwide gold production. Both the Pilbara and Witwatersrand are similar in age and composition, sitting on top of the Archean granite-greenstone basement. The Pilbara area hosts numerous small mesothermal gold deposits containing conglomerate gold — mineralization known to hold large, high-grade gold nuggets.

Major mining companies like Kirkland Lake Gold (TSX:KL,ASX:KLA) have also invested in the region, committing C$56 million into Novo Resources. Kirkland Chairman Eric Sprott is a well-known resource investor who owns shares in Novo as well as several other companies throughout the Pilbara region.

Principles of a gold stock

Like all publicly listed stocks, gold companies issue shares that are available for investors to trade. When you purchase shares of a gold stock, you are essentially purchasing a stake in the company, making an investment with financial returns or losses from its profits.

There are two main ways that an investor can buy gold mining stocks. The first way is when market participants purchase through a major mining company. The other way of trading on the stock market is by investing in a gold mining stock through a junior miner (a small cap stock).

Although no gold stock investing is 100 percent foolproof, backing a successful mining company in the precious metals space can alleviate some of the stress of a down stock market when you keep in mind that if a company’s share price goes down, it becomes more affordable to purchase and investors can more than likely anticipate that it will rise again and turn a profit.

While gold stocks are affected by some of the same factors that shape and shift the price of precious metals, they keep some distance from a direct correlation because it is possible for a gold miner and its stocks to be in a sound financial situation even in a down market.

Brock Sailer, a partner at Sprott Global Partners, believes that there is an intriguing case to be made for looking at ASX-listed stocks compared to stocks for Canadian companies, even though Canada also has high gold production.

“(There are) a bunch of (ASX-listed) mining companies doing exactly the same thing as what the Canadians are doing. So you’ve got to be careful when you’re investing in a Canadian stock — are you getting the best value?” he told INN.

As his second point, Salier noted that the ASX and even the LSE are home to companies that focus on commodities and geographies that are less common on the TSX and TSXV. For example, he said, London-listed companies tend to be more comfortable with Africa, while companies on the ASX “have taken to (the Tesla (NASDAQ:TSLA) revolution) with more vigor than anyone on the TSX or in London.”

Best gold stocks on the ASX

Below we’ve outlined the five ASX-listed gold stocks within Western Australia that have seen the biggest gains year-to-date. Data for this article was gathered using TradingView’s stock screener on November 7, 2019, and companies with market caps of over AU$50 million were considered.

Magnetic Resources is a mineral exploration company with a focus on gold mining in Western Australia. Gold assets held by the miner include Mount Jumbo, Kowtah, Hawks Nest, Mertondale and the Christmas Well.

In a recent annual report, the miner announced that it had unearthed 70 ounces of large gold nuggets at its Mertondale target. The company added that one of the largest nuggets contained over 20 ounces of the yellow metal and was 10 centimetres long by 5 centimetres wide.

These nuggets are reported to occur at shallow depths of 0 to 2 metres within a lateritic profile and are likely to be sourced from the underlying bedrock due to the angular nature and size of the nuggets, which were found using hand-held metal detectors.

Following the discovery, Magnetic signed a tribute agreement, which ensured that the miner would receive 15 percent of the gross sale value of all minerals including gold extracted, mined, produced or won from the tenement.

Capricorn Metals is slightly newer to the gold mining space, but after it acquired its flagship Karlawinda asset in early 2016, the company has moved to quickly grow the project. Resources are currently estimated at 1.5 million ounces, an increase of over 100 percent since the miner acquired the asset.

Late last year, an updated reserve of 892,000 ounces was estimated for the Bibra deposit, which is a 25 percent increase from the previously announced maiden ore reserve of 713,000 ounces.

The new ore reserve is contained within an updated measured and indicated mineral resource of 45 tonnes at 1 grams per tonne gold containing 1.4 million ounces. This is an increase of 200,000 ounces from the 2017 mineral resource.

Red 5 operates both the Darlot and King of the Hills (KOTH) gold mines in the Eastern Goldfields region of Western Australia.

Since the miner acquired these projects two years ago, the company has successfully ramped up gold production to an annualised run-rate of over 100,000 ounces a year and is now embarking on aggressive exploration programs in order to increase its resource and reserve base.

Westgold has commissioned and operates three production facilities in Western Australia, the Murchison gold operations, Fortnum gold project and the recently started Cue gold operations. Once steady state production is achieved in the near future, Westgold will be a significant producer with multiple high quality long life projects.

In its most recent operation update, the miner revealed that its gold hedge position at the end of Q3 was 202,500 ounces at an average of AU$1,879 per ounce, essentially 10,000 ounces per month until June 2021.

Ramelius is a gold producer that has been listed on the ASX since 2003 and began production in 2006.

The company’s original flagship mine, the Wattle Dam, was located approximately 70 kilometres south of Kalgoorlie and was at one stage the highest grade gold mine in Australia. It was operated successfully from 2006 to 2013.

Since then, Ramelius has become more prominent in the space. Its is currently operating its Mount Magnet mine, Edna May mine and Vivien underground mine near Leinster. Exploration projects are ongoing in Western Australia and Nevada, US, as well.

At the end of October of this year, the company announced that it had produced 44,182 ounces of the yellow metal at an all-in sustaining cost of AU$1,234 per ounce.