Nevada is ranked as the fourth largest producer of gold in the world. The state produces approximately 79 percent of all the gold mined in the United States, totaling 175 tonnes in 2009. 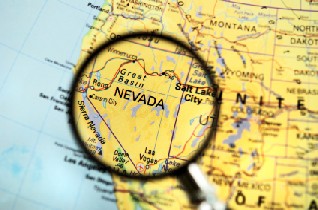 Although Nevada was well reputed for prolific silver deposits in the 19th century, many of the early mining districts also hosted considerable quantities of gold. The Comstock Lode, for instance, produced 267 tonnes of gold through 1959, and the Eureka district produced 37 tonnes. Combined production of gold from Nevada recorded from 1835 to 2008 is estimated at 4,700 tonnes, which would be worth approximately $180 billion at 2010 prices.  The establishment of lenient marriage divorce proceedings and legalized gaming during the 20th century transformed Nevada into a major tourist destination. Although Las Vegas and the tourism industry have surfaced as Nevada’s largest employer, mining continues to be a substantial sector of the state economy as Nevada is ranked as the fourth largest producer of gold in the world.  The state produces approximately 79 percent of all the gold mined in the United States, totaling 175 tonnes in 2009.

The majority of all the gold in Nevada comes from large open pit mining and cyanide heap leaching recovery. About 24 percent of gold from Nevada in 2009 was produced from underground mines.  Unlike coal and oil extraction, where mining companies pay royalties for minerals obtained from public land, gold mining companies do not pay any royalties for deposits claimed on federal public lands as mines on public land continue to operate under the General Mining Act of 1872. In 2009, Nevada produced construction aggregates, barite, clays, copper, diatomite, dolomite, gypsum, lime and limestone, lithium, magnesite, mercury, molybdenum, oil, gas, perlite, precious opals, salt and silica sand.

The mining jurisdiction of Nevada ranks tenth out of fifty-one in the most recent Fraser Institute’s Survey of Mining Companies: 2010 Mid-Year Update. Nevada’s score suffered the second largest decline in the developed world, from 88.8 to 77.0 out of 100, dropping it from a rank of third to the tenth spot.  According to miners, Nevada still remains an excellent place to mine, but the results of the survey highlighted some concern about an effort to put a considerable tax increase to a referendum. The referendum petition failed to get enough signatures to be put on the ballot; however, the legislature enacted a new one-time mining tax.

Gold Mining in the State

A number of major mining companies operate gold mines in the state, including Newmont Mining , Barrick Gold Corp. and Kinross.

Newmont Mining Corporation (TSX:NMC) (NYSE:NEM)has been pouring gold in Nevada for nearly 50 years along a 100 mile stretch of highway in the north section of the state. Several of the company’s properties operate as an integrated unit, and together, they include a broad range of processing methods comparable with other global gold mining complexes. The company suggests this strategy maximizes economic recovery of gold from a variety of ore types and grades optimizing economies of scale. Operations include 14 open-pit and four underground mines and 14 processing facilities. In addition to gold, the operations produce silver and copper as byproducts.

Barrick Gold Corp. (TSX: ABX) (NYSE: ABX), the world’s largest pure gold miner has obtained a number of assets in Nevada with the Goldstrike Complex representing the greatest regional source of productivity for the company.  The complex is located on the Carlin Trend, which is considered to be one of the most prolific gold mining districts in the Western Hemisphere, about 60 kilometres northwest of Elko.

Kinross (TSX:K) (NYSE:KGC) owns the Round Mountain open pit mining operations located in Nye County, with production in the district dating back to 1906. Currently Round Mountain uses conventional open-pit mining methods and recovers gold using four independent processing operations. These include crushed ore leaching (reusable pad), run-of-mine ore leaching (dedicated pad), milling and the gravity concentration circuit. Most of the ore is heap leached, with higher grade oxidized ores crushed and placed on the reusable pad. Lower grade ore, ore removed from the reusable leach pad, and stockpiled ore that was previously leached are placed on the dedicated pad.

Great Basin Gold (TSX:GBG) (AMEX:GBG) focuses production at the Hollister mine on a sustainable and consistent future growth model. The company expects that the fourth quarter of last year will be the first reporting period where the Nevada operations will be fully autonomous via proprietary integration of the mining-milling-pouring-marketing processes. With proven and probable reserves of 1.2 million ounces and resources of 1.64 million ounces in the measured and indicated category, the mine is forecasting an average annual production of 110,000 troy ounces of gold per year over a 10 year life of mine, at an average cash cost of approximately $426 per ounce. Production and exploration growth at Hollister combined with potential of the Esmeralda mine and mill, might provide upside opportunities for this mine to become a significant regional producer.  The Manager of Investor Relations for Great Basin, Michael Curlook, is expected to be presenting later on this month on January 23, at the Vancouver Resource Investment Conference.

Quadra FNX Mining Ltd. (TSX:QUX) operates the Robinson open pit copper and gold operations located in White Pine County, approximately 11 kilometers west of Ely.  The mine currently is a primary producer of copper concentrate; however, the large scale of the operation produces significant by product gold and some molybdenum. The concentrate is sold to a number of international and domestic smelters and traders.