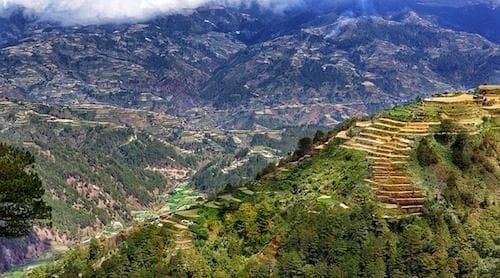 Mining for gold in the Philippines is not an easy endeavor. Even so, the country is home to many producers and exploration companies.

Mining gold in the Philippines can be difficult. The country’s mining sector remains largely untapped, and much of that has to do with political turmoil and controversy.

As a result, the Philippines is far from the heaviest player in the gold space — read about the top gold-producing countries here — but it’s clear that the nation does play a role in producing gold. The Philippines was ranked 24th in terms of global gold production in 2018, producing 36.8 tonnes of the precious metal.

Here’s a look at some of the challenges of mining gold in the Philippines, as well as its growth potential and an overview of the publicly traded companies that are currently mining and exploring for the yellow metal in that region.

Gold in the Philippines: Political challenges

As mentioned, mining for gold in the Philippines is not an easy task. While vast mineral reserves and potential exist, the country holds to strict mining laws, citing environmental impact and worker welfare as key reasons for these rules.

This is why the country reportedly holds the world’s second-largest gold deposits, but they remain largely untapped — extraction of the metal comes with concerns surrounding health, safety, environmental hazards and rights of local (indigenous) people who are at the receiving end of deadly wastewater.

This emphasis on environmental impact has been championed by the current president, Rodrigo Duterte. He has said that mining companies must “shape up” as they are causing harm to land and water systems. In 2017, he even accused Canadian mining companies of a destabilization plot.

Duterte continued this ill will towards the mining industry when in 2018 he made comments that he would like to shut down the sector entirely due to the alleged environmental damage it has caused the region. Under Duterte’s rule, there have been several mine closures and permit denials.

In response, the mining community, including the Philippines’ Chamber of Mines, said the closures and permit denials would cause harm to 1.2 million workers in the industry. Miners also said that they were being treated unfairly because of a lack of due process in these bans.

Roy Cimatu, who became the secretary of environment and natural resources in 2017, has taken a slightly more balanced approach between the environment and mining industry.

Speaking during a radio interview, Cimatu said, “(I believe) we can allow mining (as long as) it’s responsible, it does not destroy our environment, as long as it is properly handled.” That said, after over two years in office, Cimatu hasn’t lifted the ban on open-pit mining.

Gold in the Philippines: Economics

Mining accounted for US$4.26 billion in exports for the country in 2018. It also provided over 200,000 jobs and 25.7 billion Philippine pesos in taxes. While mining does not make up a huge portion of the Philippines’ economy, the effects and benefits are felt strongly in certain parts of the country. Regions like Mimaropa and Caraga disproportionately rely on the value and opportunities produced by mining.

When considering why mining hasn’t yet taken a firm hold in the Philippines, Forbes explains that access to the sector has been “mired since the 1980s in klutzy laws, environmental battles and land rights issues.” The Wall Street Journal corroborates that statement, noting that most indigenous people in the country are not in favor of mining, and have special rights that make gaining their approval essential.

Gold in the Philippines: Growth potential

While the political landscape in the Philippines continues to be less than favorable, there remains growth potential in the region, especially when you consider just how much untapped gold resides throughout its landscape.

The mining industry continues to be a growing contributor to the Philippine economy and based on the mining industry statistics released by the Philippine Mines and Geosciences Bureau, the gross production value of the first quarter of 2018 was 109.5 billion pesos. This valuation surpassed the gross production value of 2017, which came in at 108.6 billion pesos.

In addition to its monetary contribution to the region, the mining industry also helps maintain steady employment opportunities to the communities within the Philippines, as at least 200,000 workers are employed within the mining industry. Indirectly, mining companies have also positively impacted the development of their stakeholder-communities.

Finally, with a shift in politics, mass amounts of gold, and in turn value, can be unlocked in this vast gold region.

Gold in the Philippines: Mining companies

While the political climate of the Philippines has drawn back the confidence of the mining industry, there are still many gold operations investors should know about. Read on to learn more about them. All companies included had market caps above US$15 million at the time of publication.

Apex Mining’s main project is the Maco mine (formerly known as Masara), located on the island of Mindanao. Apex has been operating for 40 years and saw its mining income increase by 21 percent year-on-year in 2018. It attributes its success to improved operations at Maco — it produced 70,564 ounces ounces of gold last year, its highest annual output to date.

Medusa Mining operates in the Philippines through its subsidiary Philsaga Mining. The company’s Co-O project is situated on the southern island of Mindanao and produced 102,500 ounces of gold for its financial year ended June 30, 2019. The company also reported revenues of US$129.6 million for the period, representing a 4 percent rise year-on-year.

Metals Exploration’s main asset is the Runruno gold-moly project on the island of Luzon. The company acquired the project in 2005 and has since increased its ownership to 100 percent. Runruno has a defined mineral resource of 1.39 million ounces of gold and 25.6 million pounds of molybdenum; 1,050,000 ounces of gold are designated as measured and indicated, while 900,000 ounces of gold are listed as proven and probable reserves.

For the quarter ended June 30, 2019, the company reported that 15,884 ounces of gold were poured during that time, while 15,577 ounces of the yellow metal were sold during the same time period.

OceanaGold owns and operates the high-grade gold-copper Didipio mine, also located on Luzon. The company achieved commercial production at Didipio in 2013, and over its 16 year life the mine’s nominal production should be 100,000 ounces of gold and 14,000 tonnes of copper.

At the beginning of July, the company filed an injunction in order to maintain production at its Didipio asset in the Philippines after the governor of Nueva Vizcaya told local government to restrain all operations pertaining to the miner.

Philex Mining was incorporated in the Philippines in 1955, and its subsidiaries fall under either Philex Mining (metals) or Philex Petroleum (energy). Philex Mining operates the Padcal mine, which is its largest revenue source. Padcal has been operating since 1958 and is expected to end its life in 2020.

Philex also owns the Silangan copper-gold mine, which encompasses the feasibility-stage Boyongan and Bayugo deposits. The company produced a total of 61,977 ounces in 2018, down from its 2017 output of 84,638 ounces.

St. Augustine Gold & Copper is currently developing the King-king project, which it bills as one of the largest undeveloped copper-gold deposits in the world. Mineral reserves at King-king come to 617.9 million tonnes at 0.3 percent total copper and 0.395 grams per tonne gold.

The project is expected to put out 3.16 billion pounds of copper and 5.43 million troy ounces of gold over a 25 year mine life. The company expressed concern over the possibility of open-pit mines being banned by the government in a management’s discussion and analysis report.

RTG Mining is an Australian mining and exploration company that is focusing on gold in the Philippines. The company’s key project is the Mabilo gold-copper site, which has an indicated mineral resource of 227,000 tonnes of copper and 762,400 ounces of gold. It’s also exploring its Bunawan project, where high-grade mineralization of gold has been found, including 7 meters at 4.18 grams per tonne of gold. Its Nalesbitan project is in the early exploration stage.

19 responses to “Mining for Gold in the Philippines”