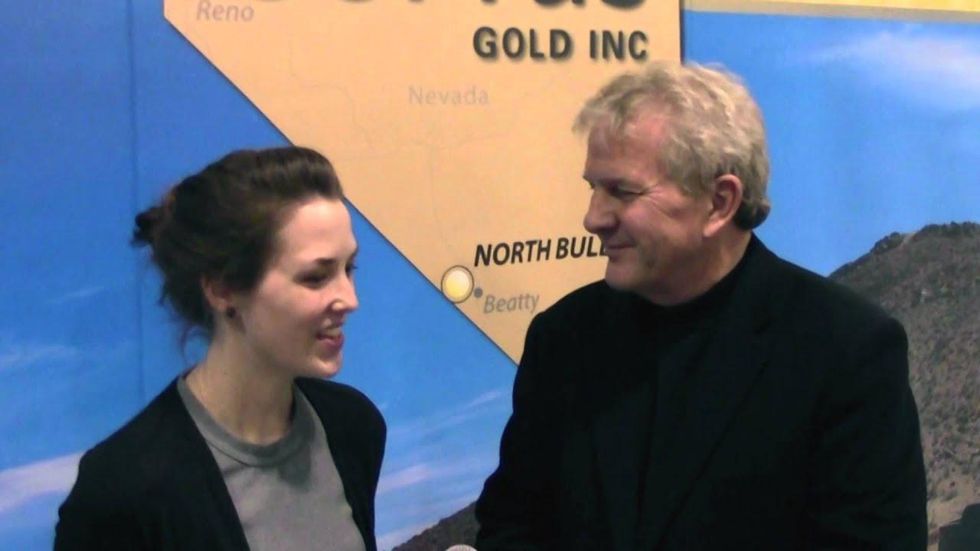 Junior exploration and development company Corvus Gold is currently focused on advancing its Nevada-based North Bullfrog project. At PDAC, CEO Jeff Pontius was able to provide an update on how work there is progressing.

At PDAC, one of the gold companies Resource Investing News had the chance to speak with was Corvus Gold (TSX:KOR,OTCQX:CORVF). The junior exploration and development company is currently focused on advancing its Nevada-based North Bullfrog project, and CEO Jeff Pontius was able to provide an update on how work there is progressing.

To start off he explained what makes Corvus stand out from its peers — after all, Nevada is a very popular mining jurisdiction, especially for gold-focused companies. “I think our real standout … is the fact that we’ve got a near-surface oxide deposit with a high-grade vein system in it,” he said, adding, that “offers a very low cash cost type operation in the future.” Furthermore, the company is “just evaluating and developing a brand new resource” that will be used in a preliminary economic assessment. He also touched on the specific benefits of the project’s location.

In terms of Corvus’ plans for the future, Pontius noted that the company recently raised $4.5 million and plans to put that money toward exploration at North Bullfrog. “What you’ll see us do is a first-pass exploration program to evaluate many [targets similar to the Yellowjacket deposit], and the best ones of those [there will be follow-up drilling] starting in September.”

In closing he touched on how exactly Corvus was able to raise that money during today’s tough times, also explaining what catalysts investors can expect from the company in 2015. “I think when you see additional discoveries … that hopefully are going to be made this year with Corvus Gold, it’ll be a true catalyst for the company and the stock I hope,” he said.

RIN: I am Charlotte McLeod with Resource Investing News. And here today with me at PDAC is Jeff Pontius, CEO of Corvus Gold. Thank you for joining me.

JP: Thanks, Charlotte. It’s great to be here.

RIN: Yeah. So, Corvus’ North Bullfrog project is in Nevada, which is a very popular mining jurisdiction, especially for gold companies. What is your company doing to standout?

JP: Actually, I think our real standout for us is the fact that we’ve got a near-surface oxide deposit with a high-grade vein system in it. So, it offers a very low-cash-cost-type operation in the future. We’re just evaluating and developing a brand new resource and that resource will be used in the PEA, we’ll get some economics on this.

RIN: Okay. And are there any particular advantages in terms of your project’s location?

JP: Sure. We’re about 5 miles north of a small town called Beatty, Nevada, great little mining community there in Nevada. About an hour-and-a-half north of Las Vegas. The property has got roads all through it, a major highway along its eastern boundary, brand new high-tension power line that goes through where we have power directly into the site. We’ve also acquired a water right in the area that we have 1,600 acre feet of water. Very important in this part of Nevada.

So, we’re moving this project forward not only on the exploration front, but, really on the mine development front. And that’s our real goal, to push that forward this year.

RIN: Okay. Great. And recently, you raised $4.5 million. I believe that’s going towards exploration. Could you tell what the goals of the program will be?

JP: Yeah. We’ll be doing a two-phased program where we’ve discovered a high-grade vein system and what we call our Yellowjacket project or deposit. And we have a number of other very similar targets to Yellowjacket. And so, what you’ll see us do is a first-pass exploration program to evaluate many of those structures that are out there. And the best ones of those will be followed up, drilling on starting September.

So, it’ll be a pretty aggressive drill program that we’re going to get after, and hopefully, we’re going to find another one of these vein systems. The one we have right now is about 1 million ounces and we’re hopeful that we’ll be able to put together one or two more of these.

RIN: Okay. And this is not the easiest time to be raising money.

RIN: How were you able to do that?

JP: Well, we were very fortunate. We’ve got a great group of loyal shareholders that have really been the bread and butter behind Corvus Gold and its, I would say, relative market success compared to our peer group. And really, that is the backbone of the guys that are prepared to give you money in a very tough time in the market. And so, this financing was done with AngloGold Ashanti (NYSE:AU), a big South African mining company who have invested quite a bit of money in Corvus Gold. And the Tocqueville Gold Fund (MUTF:TGLDX) out of New York, the largest gold fund in the US, run by John Hathaway, and those guys have been stalwart supporters of this project and our exploration team for the last three or four years now.

RIN: So you’ve got some good people behind you.

RIN: Yeah. Okay. So, finally, do you have any other catalyst for 2015 that you want to mention?

JP: Yeah, I think, probably some of the real key features are going to be the success of the exploration program. We put a lot of effort into getting these targets developed. Now, that we’ve drilled out the Yellowjacket deposit on 50-meter centers, we’re really in a position where we can understand what the structure is that’s hosting these high-grade veins. And these are veins that can go up to a half ounce per tonne. The beauty of it is they’re all open-pit minable.

So, it is really an economic-type approach. So, I think when you see additional discoveries that are hopefully are going to be made this year with Corvus Gold, it’ll be a true catalyst for the company. And the stock, I hope.

RIN: Great. Thank you for joining me today.

JP: All right. Thank you.

RIN: All right. And I am Charlotte McLeod with Resource Investing News.