Dig Media has conducted its end-of-year Resources Investing News 2010 Survey to gauge the interests of its readers and gain insight into investors’ perception of the markets. The survey results show that while our readers are still optimistic about the future of commodities markets, they are choosing a cautious approach toward investing.

Dig Media has conducted its end-of-year Resource Investing News 2010 Survey to gauge the interests of its readers and gain insight into investors’ perception of the markets. The results of the November survey reflect a number of interesting investment trends in various commodity markets; especially when compared with the two previous Dig Media survey’s conducted in December of 2009 and May of this year.

The commodities with most notable increases in investor interest include uranium, lithium, oil & gas, gold, silver, rare earths and vanadium.

In our last survey report released in June of this year, we noted that a distinct air of investor apprehension had settled over the resource marketplace with a notable decline in the percentage of survey respondents who were invested in resource stocks; an understandable result given the high level of economic uncertainty permeating the global markets in the first half of 2010.

Our most recent survey shows that while our readers are still optimistic about the future of commodities markets, they are choosing a cautious approach toward investing. 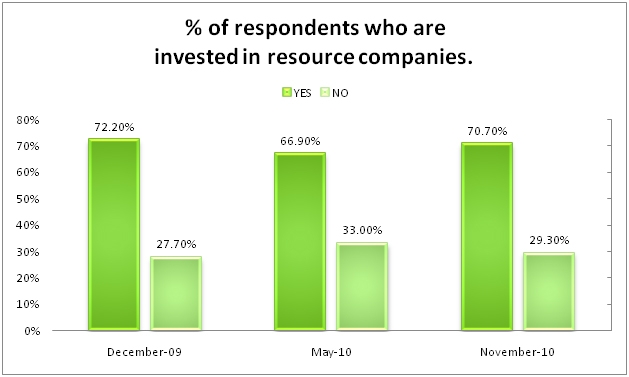 The percentage of respondents who have invested in resource companies in the last year is up slightly from 66.9 percent in the previous survey to 70.70 percent in the November survey; though still down 1.5 percent from December 2009.

The number of respondents who indicated they plan to invest in commodities in the next six months fell 9.3 percent points from the previous survey to 62.4 percent in November 2010. This figure is a distressing 16.6 percent below the number reported in the survey conducted nearly a year ago. However, while a significant number of readers are less confident in the current market climate, they’re not ready to give up on commodities just yet. The number of respondents saying no to the resource market is down 2.9 percent from the May 2010 survey and 0.5 percent from the December 2009 survey.

Most telling is the number of respondents riding the fence, up 12.3 percent from May and more than double the amount of fence-riders reported in December. 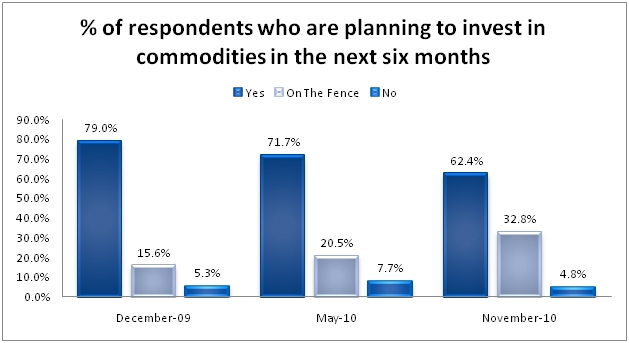 The pie chart below shows the percentage of respondents invested in a number of the commodities represented in the Resource Investing News Network: 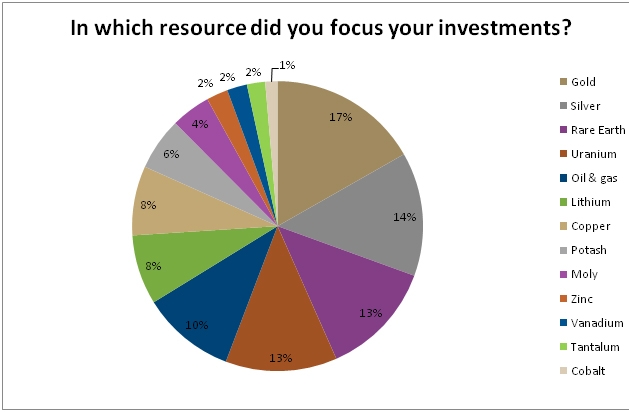 The number of respondents who said they had invested in gold and silver this year is up a remarkable 46.6 and 40.8 percent respectively from the previous survey to 67.6 percent for gold and 55.5 percent for silver. Correspondingly, gold prices are up nearly 15 percent while silver prices have gained an outstanding 40 percent since May of this year. 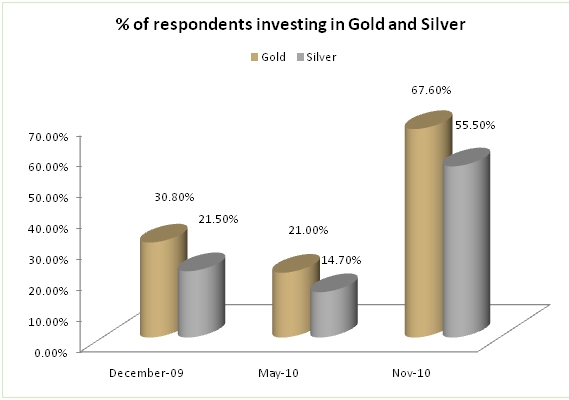 A significant increase in these commodities shows improved investor optimism in the long-term global economic outlook despite the noted hesitance to re-enter the marketplace. 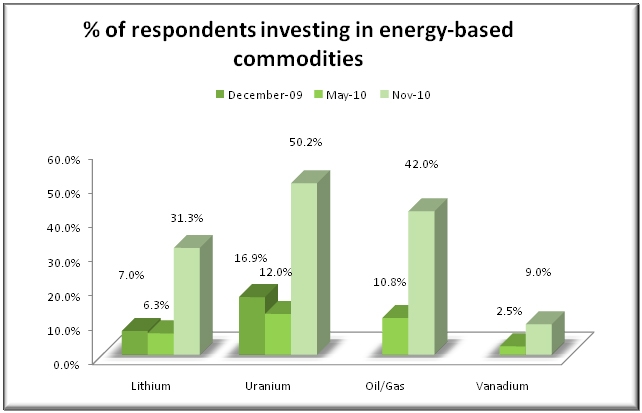 After hitting a low of $40.50 per pound in March, uranium spot prices have been steadily rising, hitting $52 per pound in October of 2010 and reaching $61 per pound in November. According to Patricia Mohr, Vice-President, Economics and Commodity Market Specialist at Scotiabank, “Prices jumped around November 8, following comments by China’s National Development and Reform Commission’s Energy Research Institute that China is considering a new target for nuclear power of 80 GWe by 2020, initially reported by the media as 112 GWe, double the current 40 GWe target, and much larger-than-expected even by optimistic observers.” 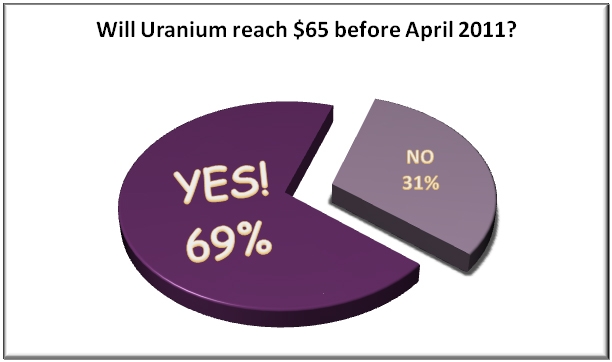