The Resource Investing News Investor Survey results are in and once again the results reveal that investors are cautiously optimistic about the investment potential of resource stocks in today’s financial climate. Our surveys, although unscientific, help us to better understand our audience’s interests as well as to identify and monitor developing and ongoing trends in resource investment.

Throughout the month of October, The Resource Investing News Network will be featuring several commodity-specific articles discussing the results of the survey.

Our most recent investor survey is the fourth we’ve conducted since December of 2009. For the past two years, we’ve been using our surveys to gauge investor interest and activity in the resource market and various specific commodities. Over the course of the developing worldwide recession that decimated the global stock markets, we’ve seen a marked loss of confidence in the resource markets within our survey responses coupled with an underlining sentiment that opportunities are still to be had, particularly in the precious metals and energy-related commodities.

Looking back at our past surveys, the percentage of respondents who reported investing in resource stocks in the past year remained fairly stable from the December 2009 survey to the November 2010 survey, however the percentage of respondents who indicated that they would most likely invest in the upcoming 6 months fell nearly 17 percent. Yet, rather than a 17 percent increase in the decidedly “no” category, we saw that number added to the percentage of respondents who replied that they were “on the fence,” implying a cautious optimism in the resource markets in late 2010. At that time, economists were arguing over whether or not the global markets were headed into recovery with some warning of a double-dip recession ahead, making the notable caution on the part of investors perfectly understandable. 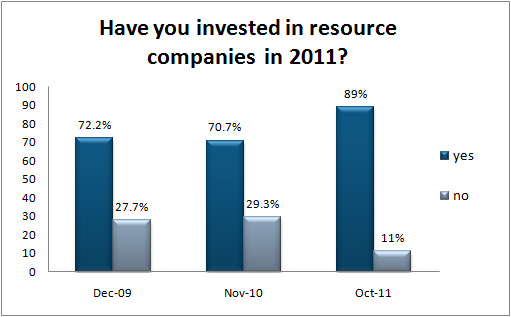 By early 2011, we all had started to breathe easier and the worst seemed nearly over. Our investor audience began wading eagerly back into the markets with 89 percent responding in our October 2011 survey that, “yes” they had bought stock in resource companies in the past year, up from 70 percent in November of 2010.

However, with the financial crisis in Europe deepening and the United States failing to solve its own economic problems, namely unemployment, that sense of caution we noted in the November 2010 survey is still there one year later. In our most recent survey, when we asked our investor audience if they planned to invest in resource stocks in the next 6 months, 63 percent responded “yes,” similar to the percentage of respondents that still held confidence in the resource sector in November 2010 (62.4 percent). Interestingly, it seems less our willing to venture back into the market just yet with 27 percent of respondents in the most recent survey reporting they remain “on the fence,” compared to the nearly 33 percent expressing cautious optimism in late 2010. 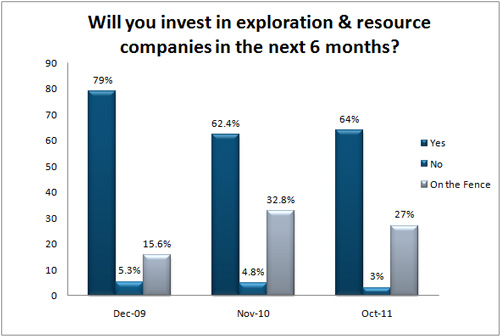 Many of the responses to the question, “What do you feel is the biggest risk for resource investors?” reveal what’s behind the sentiments of apprehension. Most respondents voiced concern about the debt crisis in Europe, possible economic slowdown in China, rising interest rates in the West, higher inflation in the BRICs, the probability of a global double-dip recession and the lack of credible and competent Western political leadership. These concerns are no doubt behind the loss of investor confidence in the resource markets we’re witnessing now.

Fear and uncertainty over the health of the global economy has exponentially increased the level of investor demand for precious metals over the last three years. Gold and silver’s appeal as safe haven assets have increased remarkably among our readership as well. In December of 2009, a year following the 2008 Crash, our investor survey revealed that 30.8 percent and 21.5 percent of respondents were invested in gold stocks and silver stocks, respectively. By November of 2010, those numbers had exploded to 67.6 percent for gold stocks and 55.5 percent for silver stocks.

The trend in increasing investor demand for precious metals stocks continued throughout 2011, most notably with regards to silver stocks which our survey revealed to be on par with gold investment, both at 74 percent. Not surprisingly, when asked which commodity groups they believe offer the greatest investment potential, 65 percent of respondents chose “Precious Metals.” You can read more about this trend October 17th on Silver Investing News. 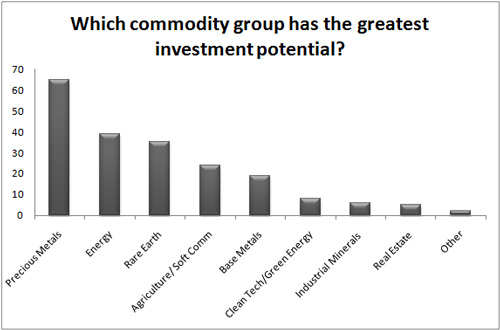 While 40 percent of our survey respondents were also believers in the investment potential of energy stocks, only 28 percent reported investing in uranium stocks in the past year, down significantly from 50.2 percent in November of 2010. Lithium stock investment is also down nearly 10 percent to 22 percent in our most recent survey. You can read more about these investment trends in uranium and lithium stocks on Uranium Investing News and Lithium Investing News later this month. However, our investor audience is still strongly confident in the investment potential of oil and gas stocks with 47 percent investing in the past year, up 5 percent from November of 2010 and over 35 percent from our May 2010 survey.

We’ve seen some remarkable growth in base metals investment interest, specifically those required for infrastructure development including copper and iron. The number of respondents reporting they have invested in copper stocks in the last year (42 percent) has risen by 11 percent from the November 2010 survey and an incredible 28 percent since our first survey in December 2009. Even more impressive, 16 percent of our survey respondents reported investment in iron stocks, a category that barely registered above 1 percent on previous surveys. You can read more about these trends in base metal stocks in upcoming Copper Investing News and Iron Investing News articles.

Our final question to our audience centered on a highly contentious topic in the precious metals community that evokes strong opinions among many investors and analysts. When asked, “Do you believe the silver market is rigged?” an overwhelming 66 percent answered in the affirmative. You can read more about this topic later this month on Silver Investing News.