Analysts believe the long-term forecast for natural gas is promising as demand for the fuel is set to surge in the next few years.

Natural gas prices have been under pressure since the start of 2017, but trended upward at the beginning of May after a new storage report from the US Energy Information Administration (EIA) showed lower supply levels than analysts expected.
According to the report, as of May 12, total natural gas in storage stood at 2.301 trillion cubic feet. That is 13.9 percent lower than levels seen a year ago at this time. The day the report came out, Henry Hub natural gas futures jumped to $3.42 per mmBtu, their highest level of the year.
“A triumvirate of draws for crude, gasoline and distillates is a supportive influence for prices,” MarketWatch quotes Matt Smith, director of commodity research at ClipperData, as saying.

Give me my free report!
Prices were also driven higher earlier this month by restrictions on the construction of the Rover pipeline. Rover is part of a network of pipelines being built to boost production at the Marcellus and Utica shales. The restrictions could delay new supplies reaching the market.
“The market is really focused on the Rover expansion and the market took the order that came out [on May 10] in a very bullish way,” Kyle Cooper, director of research at IAF Advisors in Houston, told Bloomberg.
But as the summer approaches, demand for natural gas is expected to decline, as the fuel is used extensively for heating homes. In fact, prices pulled back this week, losing almost 6 percent due to bearish weather forecasts. On Wednesday (May 17) Henry Hub natural gas futures closed at $3.19, while June natural gas futures settled at $3.283, down $0.032, or 0.97 percent. 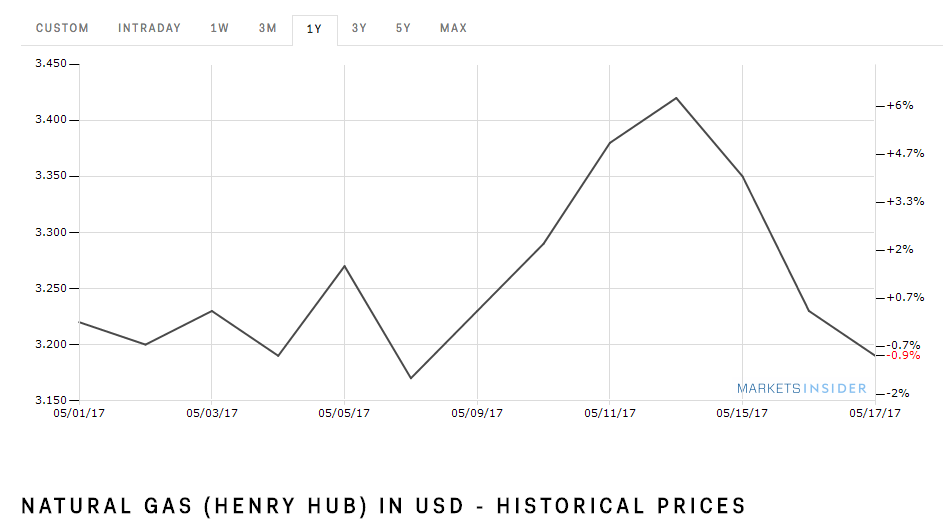 Chart via Business Insider.
That said, the long-term forecast for natural gas is promising. Demand for the fuel is set to surge in the next few years, supporting higher prices.
“Increased access to low-cost natural gas from the Marcellus Shale and other regional shale plays has driven the switch away from coal in the Northeast United States,” the EIA said last week. Analysts at the organization noted that the cheaper and more plentiful natural gas becomes, the more incentive there is for producers to abandon coal.

Similarly, the International Energy Agency anticipates that the world’s use of natural gas could surge by more than 50 percent from 2010 levels, and might account for at least 25 percent of global energy demand by 2035.
According to panelists at FocusEconomics, the average natural gas price forecast for 2017 is $3.16. The most bearish forecast for the year comes from Standard Chartered (LSE:STAN), which is calling for a price of $2.79; meanwhile, Capital Economics is the most bullish with a forecast of $4.
Don’t forget to follow us @INN_Resource for real-time news updates.
Securities Disclosure: I, Priscila Barrera, hold no direct investment interest in any company mentioned in this article.