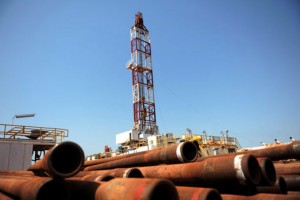 Despite indications from the International Energy Agency (IEA) that global oil demand is falling for the first time since the 2008-2009 economic downturn, a host of supply concerns have kept crude oil prices above $100 per barrel for the first three weeks of the year.

With US sanctions on the Central Bank of Iran in place, and EU sanctions on oil imports forthcoming, it appears that Iranian oil will soon be removed from its major markets in Europe, Japan, and South Korea.

Although some analysts have noted that China and India could comfortably take on most of Iran’s diverted output, this still leaves some of the world’s largest economies in need of supplies from elsewhere to compensate for their lost Iranian imports.

Saudi Arabia, which has enough spare capacity to replace all of Iran’s current exports of 2.2 million bpd, could also keep oil prices in check says Fariborz Ghadar, a senior adviser at the Center for Strategic and International Studies.

Speaking to CNN, Ghadar remarked that “there’s not going to be much of an impact if the Saudis and others are willing to jack up production.”

But OPEC’s spare capacity now sits at less than 3 million barrels per day (bpd), down from close to 4 million bpd at the beginning of 2011, and a further reduction could push oil prices higher even if demand is covered.

Nigeria, meanwhile, is mired in internal conflict that some believe could boil over and affect the country’s 2.5 million bpd of output.

With ongoing violence in the North, and a nation-wide backlash over the removal of fuel subsidies, doubts have once again surfaced about the stability of Africa’s most populous nation.

In the face of fierce protests, the government reinstated part of the fuel subsidy to cut gas prices by one-third, but David Kotok, Chief Investment Officer of Cumberland Advisors, told CNBC on January 17 that “”Jonathan went too far on the gas price.”

“If he backs down, he is a weakened president. If he doesn’t, he will face huge unrest. He cannot win now. The situation is explosive and very bad for the oil importing nations,” Kotok added.

Recent developments in Sudan may also soon have an impact on oil markets, as South Sudan announced on January 20 that it was planning to halt oil production.

The move stems from accusations that Sudan has started seizing southern crude and demanded $32 per barrel in transport fees on shipments from South Sudan through its territory.

South Sudan inherited nearly three-quarters of Sudan’s 490,000 bpd output when it seceded last year, but most of this could be taken off of international markets as soon as next week if South Sudanese president Salva Kiir and his Sudanese counterpart, Omar al-Bashir, are unable to diffuse mounting tensions when they meet in Ethiopia on January 27.

Oil markets will also be digesting an announcement from US President Barack Obama on January 18 that TransCanada Corp.’s (TSX:TRP) would be denied a permit for its proposed Keystone XL pipeline expansion.

The decision came before a February 21 deadline set by the US Congress, but a final verdict on the pipeline will still be made in 2013.

But despite the setback, many analysts still believe the project will eventually be given the green light from the US government.

John Stephenson of First Asset Management Inc. remarked to Bloomberg on Friday that “this is clearly the biggest infrastructure project on the continent, and once the election is settled, we believe it will be approved.”