An oil and gas production rig known as Vermilion Oil Platform 380 owned by Mariner Energy Inc. (NYSE:ME) off the coast of Louisiana was on fire Thursday. 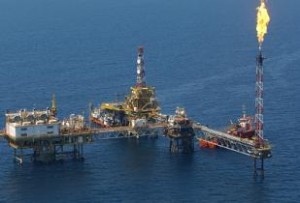 An oil and gas production rig known as Vermilion Oil Platform 380 owned by Mariner Energy Inc. (NYSE:ME) off the coast of Louisiana was on fire Thursday.  All 13 members of the crew have been evacuated and safely accounted for with no injuries having been reported. Mariner has notified and is working with regulatory authorities in response to this incident. The cause is not known, and an investigation will be undertaken. The facility was located more than 90 miles south of Louisiana’s Vermilion Bay.

The company disclosed production details from the last week of August 2010.  The facility averaged approximately 9.2 million cubic feet of natural gas per day and 1,400 barrels of oil and condensate.  It has been a difficult year for deep water drilling in the region with many of the impacts of the biggest oil spill in US history still unknown. The initial reports of the fire indicated no leaking oil into the Gulf; however, the US Coast Guard later reported that oil sheen of approximately 2 kilometers by 30 meters had been located around the site.  According to a government report yesterday, more than 26,500 people are currently working to clean up the earlier spill from April, which still tars about 126 miles of shoreline.

US crude oil futures traded lower on Thursday, weighed by concerns about a slowing economic recovery and high oil inventories in a cautious market.  This retreat followed a 2.77 percent price increase on Wednesday, fueled by encouraging manufacturing data from China and the United States.

The Energy Information Administration (EIA), reports that heading into the Labor Day holiday weekend, retail gasoline prices in the United States have fallen for three weeks in a row, and are currently averaging $2.68 per gallon, the lowest level of the 2010 peak summer driving season, and the second lowest price at this point in the past five summers.  Most of the movement in gasoline prices this summer can be attributed to crude oil prices, which have traded within a $10 per barrel range over the period and currently stand about $74 per barrel, the mid to lower end of that range.

Global crude oil markets have been generally uneventful throughout 2010, with ample supply and a slow demand recovery in the United States and Europe (relative to more robust activity in China and other Asian countries) dampening price pressures. Exceptionally high stock levels in the United States have contributed to relatively calm market conditions this summer. U.S. commercial crude oil inventories stand at their highest level for August in nearly 20 years, and total U.S. petroleum commercial stocks (including crude oil and products) are the highest since January 1983.

As we move into September, oil investors will be mindful of the potential for severe weather, particularly on the Gulf Coast which injects a measure of unpredictability on oil and gas prices.  Hurricane Earl has strengthened, bearing down on North Carolina with winds approaching 230 kilometers per hour, prompting school closures, coastal evacuations and emergency declarations.  Although it is not known where Hurricane Earl will ultimately make landfall, hurricanes often have a serious impact on energy supplies and markets. Storms of this nature have the potential to affect offshore oil and gas production, petroleum refineries, and other energy infrastructure.  Investors will also be interested in next Wednesday’s monthly energy report issued by the EIA.