Sandwiched between a recent discovery to the East, the world’s largest reserves of crude oil to the West and with their maritime border dispute resolved – Guyana and Suriname have started to attract a lot of exploration interest. 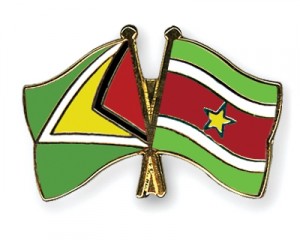 Following a discovery of crude oil by Tullow Oil in September off the coast of French Guiana, attention has turned to neighboring Suriname and Guyana, where explorers are hoping to turn up similar finds.

Tullow Oil (LSE:TLW), who discovered the massive Jubilee field off of Ghana in 2007, was drilling off the coast of French Guiana in order to test the ‘Atlantic Mirror’ theory, which sought to determine whether the Jubilee play extended across the Atlantic.

Now, after Tullow’s success, attention has shifted westwards to Suriname and Guyana. The two countries also lie directly to the East of Venezuela, which earlier this year announced proven crude reserves of 296.5 billion barrels, making the country the world’s largest oil-reserves holder.

Potential of the Guyana-Suriname basin

In its World Petroleum Assessment 2000, the United States Geological Survey (USGS) estimated the Guyana-Suriname basin could hold close to 15.2 billion barrels of oil.

But despite the massive potential of the basin, little exploration has been carried out, with Guyana and Suriname having been locked in a maritime border dispute that was only resolved after a UN arbitration ruling in 2007.

The clearly defined boundaries have since paved the way for offshore exploration in both countries, with roughly two-thirds of the basin lying in waters awarded to Guyana.

Spain’s Repsol YPF S.A. (OTC Pink:REPYY), which belatedly received Atwood Oceanics’s (NYSE:ATW) Atwood Beacon rig on Friday, will soon begin exploration at the Georgetown block off the coast of Guyana. Repsol has a 45 percent stake in the block and is an operator, along with partners Tullow (30 percent), and Canadian explorer CGX Energy Inc. (TSXV:OYL), who have a 25 percent share in the project.

CGX, though one of the smaller players in the Guyana-Suriname basin, also happens to be one of the most active. The Canadian venture exchange-listed company has a 100 percent interest in two other offshore Guyana blocks in addition to its share in the Georgetown concession.

Most of  CGX’s work as an operator has been carried out at its Corentyne license, which borders the Guyana-Suriname maritime boundary. Test wells drilled in 2002 and 2007, along with seismic surveys have turned up four prospects with an estimated 2.7 billion barrels of oil in place, and the Diamond-owned Ocean Saratoga rig will soon head down from the Gulf of Mexico to drill one of these prospects, according to an announcement from the company on December 1.

Like Guyana, interest in Suriname has also perked up since the resolution of the maritime boundary dispute in 2007.

The Atwood Beacon rig received last week by Repsol had previously been contracted to Inpex Corp. (TS#:1605) subsidiary Teikoku Oil, which finished drilling a prospect it operates in Block 31 off the coast of Suriname on December 4.

Meanwhile, Norway’s Statoil ASA (NYSE:STO) acquired 30 percent of an offshore block from Tullow in mid-November, which brings a major international offshore player into the mix in Suriname, and according to analyst Phil Corbett of the Royal Bank of Scotland, confirms the growing appeal of the Guyana-Suriname basin.

Arkansas-based Murphy Oil Corp. (NYSE:MUR), on the other hand, has had limited success at Block 37 which it operates with an 80 percent interest. But having drilled the two disappointing wells, the company was obliged to under the terms of the 6-year production sharing contract it signed in 2007 with state-owned Staatsolie Oil Co., its stake in the block could end up changing hands within the next two years given the growing interest in the area.