The company announced Wednesday a 34-percent increase in ore reserves at the project. 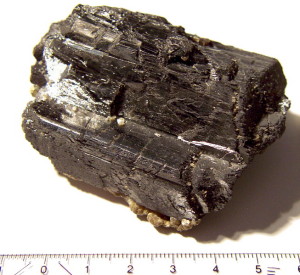 Wolf Minerals (ASX:WLF,LSE:WLFE) has been working hard to make progress at its UK-based Hemerdon tungsten-tin project, also known as the Drakelands mine, and it seems its efforts are paying off.

The company announced Wednesday a 34-percent increase in ore reserves at the project. Not to be confused with mineral resources, which are potentially valuable and have reasonable prospects for eventual extraction, ore reserves are both valuable and legally, economically and technically feasible to extract

Wednesday’s numbers replace those reported in a 2011 definitive feasibility study, and are the result of a six-hole geotechnical drilling program that targeted the parameter of the open pit and was completed in Q4 2014. Wolf has been looking to expand the project, and that program showed the company that it will be possible to steepen the final pit slope to create a deeper open pit.

Wolf has already gone back to the drawing board to draft up a new pit design (shown below). It takes the pit floor approximately 65 meters deeper, and it’s that deepening that led to the increases in ore reserves and mine life.

The pit now extends below the bottom of the majority of the drill holes in the deposit, and Wolf plans to begin additional work to increase its confidence in the resource at depth. The company believes that  ore reserves and mine life could potentially be extended even further. 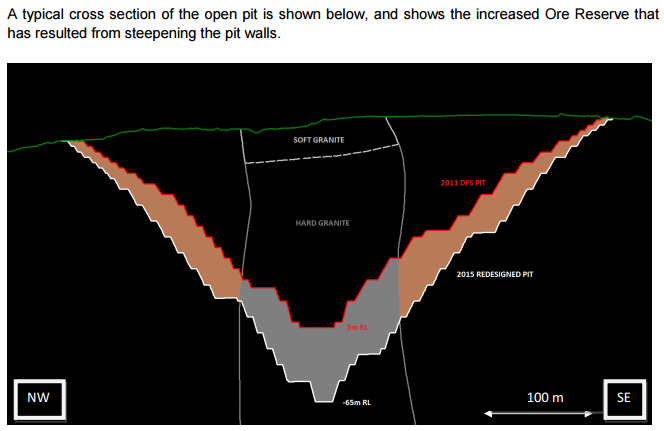 Commenting on the increase, Russell Clark, managing director of Wolf, said in Wednesday’s release, “[t]his is the next stage of optimising the Drakelands Mine, and comes ahead of commencing operations at the new process plant.” He also said the project remains on schedule and “is fully funded and commissioning of some of the installed equipment has commenced, with a view to introducing ore into the plant in July 2015.”

Other aspects of the Hemerdon project

Hemerdon is currently the third-largest tungsten and tin resource in the world, and is set to be the first new metal mine in Great Britain for over 45 years. Production is estimated at 5,000 tonnes per year of tungsten concentrate and 1,000 tonnes of tin concentrate.

The company has already taken steps to ensure waste from the mine will have somewhere to go by constructing a mine-waste facility, which is set to finish by the time the new processing plant begins operation in July 2015. The company’s interim financial report states that “during construction of the Mine Waste Facility 100,000 tonnes of ore has been extracted and stockpiled, forming the basis of the initial feed to the processing plant.”

Editorial Disclosure: Wolf Minerals is a client of the Investing News Network. This article is not paid-for content.

What Was the Highest Price for Silver?
IHS Markit: Energy Storage Market to Rebound in 2020 Despite COVID-19 Challenges
How to Invest in Tungsten
Coronavirus Round-Up: China Abandons GDP Target