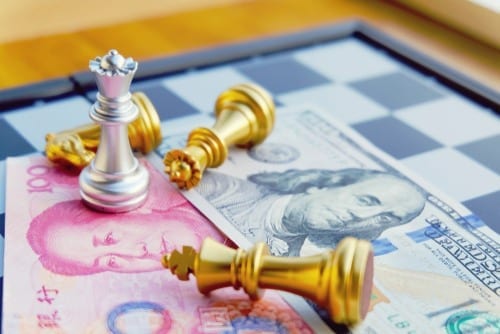 In August, shipments from China to the US totaled 452,473 kilograms, up 1.2 percent from July’s export total.

China shipped its highest amount of rare earth magnets in over three years to the US last month.

The magnets — more specifically the rare earths that make them up — have been a source of controversy since spring, when speculation emerged that China may limit the amount of the technological metals it exports to the US.

In August, shipments from China to the US totaled 452,473 kilograms, up 1.2 percent from July’s export total of roughly 447,043, prompting concern that the US may be stockpiling rare earths.

Year-over-year, US imports were 6.2 percent higher, accounting for the greatest monthly amount since China’s General Administration of Customs began tracking the numbers in January 2017.

According to data sourced by Reuters, the numbers have been steadily higher since May, when Chinese President Xi Jinping first alluded that an export limit may be implemented.

At the time, Washington had been targeting Chinese telecommunications company Huawei, issuing a government-wide ban on technology sharing with the company.

In the past, China has made good on its threats around rare earth exports. In 2010, China reduced shipments by about 40 percent at a time when it provided roughly 97 percent of all global supply.

Officials said the move was aimed at cracking down on illegal rare earths production and implementing new environmental protocols.

However, the international community interpreted it as a hostile act against Japan as part of a longstanding feud over island rights.

The 40 percent drop in supply drove rare earths prices higher and spurred the World Trade Organization to force China to lift all export limits in 2015.

Since then, Australian rare earths company Lynas (ASX:LYC,OTC Pink:LYSCF) has asserted itself as the only major player outside of the Asian nation.

Currently, Lynas is in talks with Blue Line, a Texas company looking to build rare earths refining capacity in the US. Lynas is also in the process of selecting a location for its new cracking and leaching plant.

In late August, the US Department of Defense (DoD) confirmed it is actively working to secure a domestic rare earths supply chain and said it was in talks with Australia.

The Pentagon has been focused on rare earths for “quite some time,” and is actively looking at securing its supply chain.

“The challenge is really the processing of them and having facilities to do that. Because quite often, China mines them elsewhere and brings them back to China to process them,” Ellen Lord, the Pentagon’s under secretary of defense for acquisition and sustainment, told reporters during a press conference.

While the US stockpiling rare earths may solve immediate problems, it does little to address its long-term sourcing and supply chain concerns. These are issues Mercenary Geologist Mickey Fulp believes need to be dealt with sooner than later.

“We’re seeing a 180 degree turn in bureaucracies’ willingness to permit, we have rollback of regulations, we have supply chain initiatives. It’s a lot more than mines, it’s mine-to-market supply chain. So there is strong progress being made right now, but we’ve got a long way to go,” Fulp told the Investing News Network in late July at the Sprott Natural Resource Symposium in Vancouver.

Whether China dominates the sector or other players emerge to weaken its hold, demand for the technology metals is expected to steadily grow over the next decade, spurred on by the rapidly growing electric vehicle, consumer goods and clean energy sectors.